Istanbul and Slow Food. A soul of waves and salt 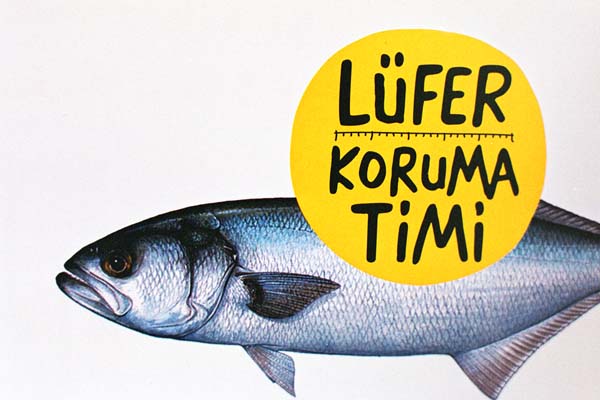 In Istanbul, the lüfer ("bluefish" in English) is not just a species of fish. It symbolises the connection between the city, its sea and its history. Unfortunately, this symbol may now disappear because of unregulated fishing. Therefore, the Slow Food convivium Fikir Sahibi Damaklar responds with a ruler, asking for fishing to be limited to adult bluefish.

Istanbul grows fast and changes quickly. Today, the dynamic megalopolis has perhaps 15 million inhabitants, sprawling over Europe and Asia. However, its unchanged soul remains rooted in water: the dark and impenetrable waters of the Bosphorus. The city's identity has been closely connected with the Istanbul Strait since the city’s name was Byzantium. Istanbul draws its myths and legends from the strait, including the legend of the lüfer (“bluefish” in English). In Istanbul, the lüfer has five different names according to its size, a unique case in the world.

The bluefish is also harvested in the Black Sea, the Marmara Sea and the Aegean Sea. However, the finest bluefish is found in the Bosphorus, due to the waters' salinity. The carnivorous lüfer finds different prey in different waters and its taste varies according to the area where it lives. It is natural that the Emperors' city, sprawling over a stretch of water that unites and separates Europe and Asia at the same time, has become the centre of a true lüfer culture.

Suleiman the Magnificent allegedly adored devouring the cheeks of fifty large-size bluefish (known as kofana). For generations, the strait’s fishermen handed down songs that they say magically attract schools of lüfer to swallow their bait. In more recent times, the legendary photographer Ara Güler, the “Eye of Istanbul”, took pictures of thousands of ships departing for the Golden Horn in search of the "Bosphorus treasure".

“In Istanbul, the lüfer is more than a species of fish. It symbolises the connection between the city, its sea and its history. For centuries, it has been the food of emperors and sultans but also of the people who have inhabited this city since immemorial times. Unfortunately, this symbol is now in risk of disappearing,” says Defne Koryürek, a determined, energetic woman in love with her city. She leads the Fikir Sahibi Damaklar convivium that has been fighting for two years to save this piece of the culinary, cultural and historical heritage of the Bosphorus city. “In the recent past, other pieces of the mosaic have been lost,” Defne told us in the convivium headquarters, consisting of well-lit, basic premises on the Istiklal Caddesi, in the central district Beyoğlu. “Tuna fish and mackerel used to be fished in the Bosphorus, but they have long disappeared. If we do not act now, the lüfer will suffer the same destiny.”

At the global level, 43,000 tonnes of bluefish were harvested in 2002 and decreased to 16,000 tonnes in 2009. In Turkey, the yields decreased from 25,000 tonnes to 6,000 tonnes in the same period. The amount of fish in the sea has cyclic trends. However, such a sharp decrease probably results from serious and deeply rooted problems.

“This sharp decrease is due to a number of deeply interconnected reasons," says Emre Orhan, a young and enthusiastic engineer. Orhan is one of the most active members of the convivium and has extensively studied the disappearance of bluefish from the Bosphorus. He notes, "Reasons include intense pollution, increasing presence of cement on the Bosphorus coasts, the astonishing growth of vessel traffic in the straits. However, the main cause is overfishing, that is excessive and unregulated fishing.”

In 1950, Turkey had 40 million inhabitants and 35,000 tonnes of fish were harvested. Today, Turkey's population has doubled, but the amount of harvested fish has increased tenfold, totalling 400,000 tonnes a year. Therefore, the convivium chose to focus its efforts on overfishing. Emre continues, “We have studied, we have sought connections with the academic world. In the end, we came to the following conclusion: if we want to save the lüfer, the minimum requirement is to forbid fishing before the fish is 24 centimetres long.”

This is not a random choice. Twenty-four centimetres means that the lüfer is sexually mature and able to breed. Today the lüfer is fished nearly exclusively when it is between 14 and 18 centimetres and known in Istanbul as çinekop. This is another reason why the adult fish, the actual lüfer, has nearly disappeared from the markets and restaurants of Istanbul and its high cost makes it a luxury good.

The convivium's Lüfer koruma timi (the "Lüfer Protection Team") was created to raise awareness among Istanbul and Turkey's citizens about the lüfer issue through a campaign for consumers, restaurants, fishermen and the government of Ankara. The members of the timi go to fish-markets and downtown restaurants with a ruler: they cause astonishment, but also generate a strong interest among the media and the inhabitants of Istanbul. A smiling Didem Şenol, the young chef and owner  of the small, cozy restaurant “Lokanta Maya” located in Karaköy, a few steps away from Bosphorus, said, “I agreed immediately, by impulse, and now I do not serve çinekop anymore. Lüfer is part of Istanbul, and, therefore, it is a part of me. To save the lüfer  is a small action that shows my love for this city."

Defne Koryürek says, “The support we received encouraged us. The 'lüfer issue' is now a top-priority in Ankara political authorities' agenda on fishery policies. The next step is now to organize a true lüfer festival, which will take place every year at the end of October. The festival seeks to restore the connection between Istambul and "its" fish. In order to achieve concrete results, however, it is vital to involve those who depend on the sea (and on lüfer) for their life and the life of their families, that is, the fishermen.”

Mufit Çıkrıkçıoğlu's face was shaped by waves and salt. Bosphorus has seeped into his skin and his hands are hardened and lively. He says, “Life at sea is not easy. I have been a fisherman all my life and, in 35 years, conditions have not improved, especially for small-scale fishermen like me." Mufit shows us on a map the small sea area where he seeks his fortune everyday. Two thousand small-scale fishermen  are active on the Bosphorus, plus those employed by large industrial fishing companies based in the Marmara Sea. “We must fish the çinekop because it is very profitable and we have to survive. Many have run up debts in order to equip their fishing boats and debts can't wait.”

Mufit, like other fishermen, is well aware that the disappearance of  lüfer, (generating 25 times higher profits than çinekop) would be a serious, maybe irremediable loss. He says, "If we want to save the lüfer, the state must intervene too. Fishermen can't bear this burden all alone. The lüfer is a common asset and everyone must do its share in saving it."

In a changing Istanbul, some symbols remain the same. For example, Mısır Çarşısı is the lively spice market on the coast of the Golden Horn. There we met Bekir, the owner of “Taze Balık”, the oldest fishmonger in the market, who came from the Anatolyan city of Erzincan.

Bekir states, “When I first started with this job, there used to be a deep, historical knowledge of fish. The communities who used to fish and eat lüfer, that is the Greek, the Armenian and the Jewish communities have nearly disappeared from this city today. Newcomers mainly come from Anatolia these days and they are not familiar with the Bosphorus. We must relearn to respect the sea before it is too late. If we do not act now, not only my profession will die: a part of us will also die, a part of Istanbul and of Istanbul's soul, which was carved by waves and salt".