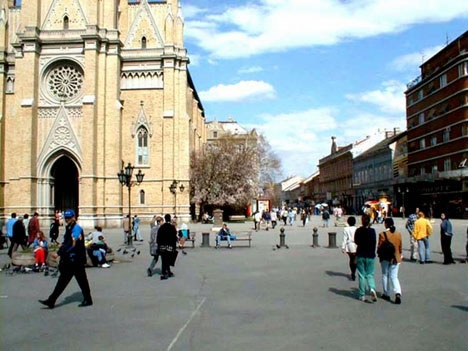 Please comment on the main qualities and omissions of Vojvodina's Omnibus Law.

Although everyone in Vojvodina was pleased for such a Law to be adopted, it was also subject to some criticism.The main criticism, which is not, by any means, entirely correct, is that the Omnibus Law did not introduce as many improvements as the politicians and the people in Vojvodina expected. According to the critics it has actually reduced the possibilities offered by the constitution of the Republic of Serbia, which is still valid. According to this constitution, for instance, it was possible for province funds to be independent from those of the Republic of Serbia and to be under the direct control of provincial authority. In reality, during the regime of the Socialist Party of Serbia (SPS) there was no real willingness to allow such independency to take place. In fact, both Vojvodina's Assembly and Executive Council were at that time just a facade, as both of the mentioned institutions did not have any authority. The draft of the Omnibus Law foresaw a broader provincial authority, however the Government's amendments, later adopted, changed the initial proposal. Therefore, according to the actual Omnibus Law, provincial funds form a part of the funds of the Serbian Republic. However, it is necessary to mention a few positive elements introduced by the adoption of the Omnibus Law.The most important change consists in the fact that it was actually the first time, after the Yogurt revolution and after the abolition of the real Vojvodina's autonomy, that the ruling class in Serbia admitted that Vojvodina's problem actually exists and also that this problem was discussed by the highest representative body in the Republic of Serbia, the National Assembly of the Republic of Serbia. The second positive thing introduced thanks to the adoption of the Omnibus Law is that when we will face the process of adoption of the new Serbian constitution, the starting position of Vojvodina will surely be slightly different, there will already be an improvement. We should consider that, for historical reasons, the situation in Vojvodina is special.

In fact, the 1974 Constitution, did not only allow a high level of autonomy to Vojvodina, but also a status as a constitutive part of the Federation of former Yugoslavia and the changes introduced by the 1990 constitution were not substantial. The Omnibus Law, which does foresee some authority for Vojvodina, will be valid before the new Constitution will be adopted and from that moment the starting position of Vojvodina will be a step ahead in respect to the other regions. The rights and the autonomy obtained thanks to the 1974 Constitution and the Omnibus Law, put Vojvodina in a special situation which would require a different solution from that of other Serbian regions.

There's another aspect which needs to be addressed adequately. It's the question whether the provincial authority is ready for a return of its competencies. It is a fact that the last ten years brought chaos in the Province of Vojvodina, which was before among the most competent and obviously, it takes time to re-build and re-establish competencies. A gradual process would allow the Province to better adapt to the changes and be ready for the return of the most complex among these competencies, that is the legislative one. After the so called "Yoghurt revolution", a lot of experts who opposed the populist conquest of power by SPS were fired from the Executive Council of Vojvodina and from Vojvodina Assembly. Not so long ago in an interview given to the "Gradjanski list", Radoman Bozovic, the President of the Provincial Government in the SPS period, stated that a high level of competence is fundamental in order to have a full autonomy. Bozovic, however forgot to mention that he was actually the one who expelled all the competent people from the Executive Council of Vojvodina, thus contributing to the abolishment of the Region's autonomy.

How much will this autonomy be extended and which fields will it touch?

According to the Omnibus Law, certain competencies will be transferred locally to the Province as in the existing Serbian laws. In this respect, we can not talk about a complete return of autonomy, as that would clash with the authority guaranteed by the Constitution. In order to describe what occurred, it is better to use the word "de-concentration" than "decentralisation".
The competencies that will be transferred to the Province will be in the fields of culture, education, official use of language, public informing, medical and social insurance, environmental protection, urbanism, building, industry, and some other. The question is then whether it's a real autonomy, because the competencies are actually not built from inside, which would be indispensable in order to make a real autonomy emerge, but only transferred. The latest results of the opinion poll conducted by the Novi Sad Agency SCAN in Vojvodina, showed that around 70% of the population would favour a higher level of autonomy than what has been decided at the moment.
These results clearly show that the idea of autonomy is well embedded in Vojvodina's society. If we also add that Vojvodina has a multiethnic and multi- confessional structure, there surely are enough reasons for a real decentralisation. However, even if small, this is a step towards the moment when Vojvodina will regain its real autonomy. Before the new constitution will be adopted, it will be necessary to reconsider Serbia's decentralisation, and hence Vojvodina's autonomy.

During the last few months there have been many discussions on decentralisation and local government; in your opinion, is the Omnibus Law enough? Please describe some of the reactions in Vojvodina.

As I have already said, the Omnibus law is just a first step towards bringing back actual autonomy. Crucial and permanent solutions will be possible after the adoption of the new Serbian constitution.
As if afraid to make radical changes, it often happens in Serbia, that the main political parties end up issuing modest reforms, that only partly solve the problem, maybe because they consider Serbia not to be ready for a rapid change. This luck of political will might costs us a lot in the future. For instance, Europe won't eternally wait for us.
The adoption of the Omnibus Law is an example of a half-made reform. It does not foresee a larger autonomy for Vojvodina, it rather broadens the presence of the central government in the periphery. Like I said before, it's more a case of de-concentration rather than decentralisation. This is why in most cases Vojvodina reacted in a negative way to the adoption of the Omnibus Law. Expectations were surely much higher.

No. The Omnibus Law only regulates a shift of the authorities to provincial organs, whilst the question of the returning of the competencies to the municipalities is generally regulated and defined by the new Law on Local Government. The complete vertical division of power (power sharing) will be possible and definitely regulated when the new Serbian constitution will be adopted.

And how is this all solved on the level of the Serbian state in whole. Will the New Law on Local Government actually solve it?

According to the New Law on Local Government some competencies in the field of education, health, and environment protection are to be shifted to the municipalities. This law also allows to shift certain special competencies to the municipalities, in case they already have a competence in particular fields. Through a co-operation with the various municipal offices, the Serbian ministries have a chance to see which municipality is actually ready - both from a practical point of view and from that of the quality of the staff - for a shift of certain competencies.In fact, there is a striking difference among Vojvodina's municipalities.

Also behind this Law on Local Government, one can retrace the attitude I mentioned earlier, that of stopping half way through before the aim has been reached. In this case, it stopped before transforming municipality from being a "local authority" - as it was when the Socialist Party of Serbia (SPS) was at the Governement - into a real "local self authority", in which local municipalities are not mere executors of the decision made by the central authority, but would be able to decide by themselves on the matters which are important to them. It seems only logical, that everything that can be regulated on a local level should be handed over to the local self-authority, as the local self-authority would best know how to meet the specific needs of its citizens.

That is how a great chance to implement crucial reforms was missed, and it is actually a very important part of all the reforms planned in the near future.

Will the return of the competencies (on the territory of the whole Serbia) also include a financial decentralisation? For instance, are taxes going to be paid on a local level?

The new laws that have been adopted (Omnibus Law and Law on Local Government) only partially address this problem. For example, the money necessary to finance the shift of the competencies to the Provincial authorities will be directly transferred from the Serbian budget to that of Vojvodina.
The new competencies of local "self-governments" will be financed by municipal taxes, but also through the national budget. We will see if this system will meet the local necessities, or if changes need to be made.