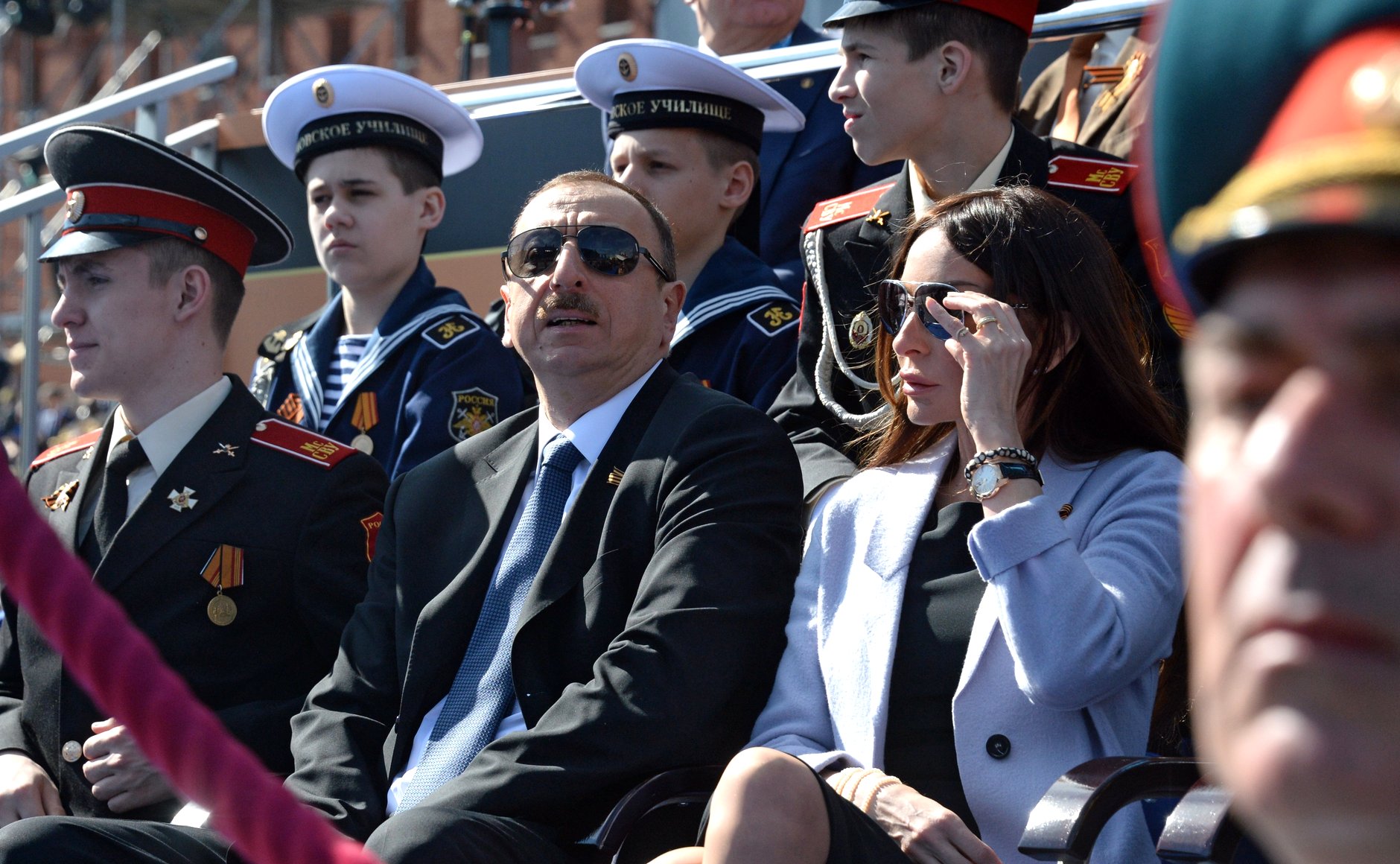 The presidential elections were scheduled for next October, but surprisingly the head of state has called them on April 11. Why did president Aliyev take and sign this decision?

On February 6, Ksenia Sobchak, Russia’s notorious opposition presidential election candidate, spoke at the Center for Strategic and International Studies in Washington, likening the upcoming elections in Russia to a casino. “Like in a casino, the casino always wins. In Russia, Putin always wins”, said Sobchak.

While the world is glued to Russia’s electoral extravaganza, Azerbaijan, a small post-Soviet state to its south, is about to have a show of its own. On February 5, the country’s incumbent president Ilham Aliyev has called for snap presidential elections, moving them up from October to April 11.

Aliyev has succeeded his late father Heydar Aliyev (former KGB general and Azerbaijan’s president in 1993-2003) in 2003 presidential elections, which international watchdogs described as not free. After being re-elected in 2008 in what independent observers called an election lacking fundamental freedom standards, in 2009 Aliyev called for a referendum that allowed him to be elected more than twice. Another re-election in 2013 was followed by a new referendum in 2016, which has extended the presidential term to seven years and has overall increased president’s powers.

Although the outcome of these snap elections, boycotted by all three major opposition parties, is obvious, the news about them took Azerbaijani public by surprise. Activists flooded social media platforms with questions. Why was this decision made and signed as a decree by the president Aliyev? Was this to further tighten the firm authoritarian grip? Or to avoid a possible public uprising given tough economic conditions?

Festivities in time of plague

Government officials had some of the strangest reasons to explain the sudden change.

“According to experience in Azerbaijan, all elections take place in autumn. But taking from the experience elsewhere in the world, it is better if different types of elections take place at different seasons, including at the beginning of the year,” Ali Hasanov, National Adviser to the president, told state news agency Azertag. He also explained that the decision to hold elections in April would also help the government carry out national and international activities scheduled for the rest of the year, hinting that the current leadership will stay in charge.

Ruling New Azerbaijan Party member Aydin Mirzazade, in an interview with Turan news agency, also hinted the results of the upcoming April elections will be in favor of the current government, reportedly saying, “If the presidential election took place according to its normal [October] schedule this would have slowed down planned activities in several directions. However, the decision to hold it earlier will only help to celebrate Azerbaijan’s 100 year anniversary accordingly”.

Azerbaijan is to celebrate its 100 year anniversary since its establishment as the first Muslim democratic republic in 1918. Mirzazade didn’t elaborate how the October elections would be getting in the way of these celebrations.

Government critics offer different explanations. Azerbaijan’s oldest opposition party Musavat chairman Arif Hajili in his commentary to Radio Free Europe/ Radio Liberty said, the the regime is interested in securing a seven-year term as quickly as possible, referring to a constitutional change adopted in 2016 during the countrywide referendum which among many extended presidential term from five years to seven.

Media law expert Alasgar Mammadli in an interview with Azadliq Radio, Azerbaijan Service for Radio Free Europe, points out that the snap elections are happening at a time when all basic freedoms have been limited in Azerbaijan. Normally an election process begins six months ahead of the scheduled election date. This gives time for independent candidates to do outreach, for political party nominees to organise meetings and campaign. With only two months left ahead of the election day, none of this can be done, says Mammadli.

According to the rules and procedures as stipulated by Azerbaijan’s election body, Central Election Commission (CEC), campaigning ends thirty days prior to the voting day. Which in this case, only leaves less than a month for candidates in these elections.

Former member of the Central Election Committee and lawyer Akif Gurbanov in his video broadcast on Facebook on February 6 evaluated the decision to call for snap elections as unfair. “The campaigning in normal elections is the same during the snap elections. In theory, once candidates are nominated, the CEC has five working days to confirm and register the nominees. They are then authorised to start collecting signatures. Candidates must collect at least 40,000 signatures from across sixty precincts and present these to the CEC”, explained Gurbanov. This is not the case in practice, however, said Gurbanov; and certainly the same rules do not apply to the opposition candidates.

Considering Azerbaijan’s long-term election fraud history, lawyers and electoral experts don’t expect fair game prior to or on April 11. Government supporters disagree. MP ad head of a pro-government Ana Vatan Party Zahid Oruc, often known for his statements in support of the ruling regime, told Trend News Agency , “it is not that they don’t have time, but that the opposition and other groups don’t have enough support backing them”.

International observers, however, point to grave procedural violations ever since the 1995 elections in Azerbaijan. According to the Organization for Security and Cooperation in Europe, rom candidate registration, to voting day, to ballot count, and the overall pre-election and post- election atmosphere, the country has failed to meet the internationally recognized standards.

Society’s dissatisfaction with the ongoing processes and the economic crisis, and government’s fear of possible rioting could be among other reasons for the snap elections, Mehman Aliyev (no relation to the country’s ruling clan), journalist and editor of Tuan News Agency, said in an interview with Azadliq Radio, Azerbaijan Service for Radio Free Europe. To avoid seeing further pockets of small scale riots ahead of the October elections, the ruling government decided to reschedule, he said, adding that other factors could also be avoiding further internal disagreements among the ruling power holders and the growing Western criticism and possible outcomes of the series of investigations against Aliyev family affiliates that were instigated by the “Azerbaijan Laundromat ” and “Panama Papers” revelations.

Former leader of the main opposition party Musavat Isa Gambar agrees, tying the decision for early elections to the fear of having to deal with mass protests over the summer.

All three major opposition parties: Musavat, Popular Front and ReAl, by February 10 have declared that they were to boycott the election, as they saw no point to legitimize an imitation of elections.

In a video address on Facebook, Ali Karimli, leader of another oldest opposition party Popular Front, accused the ruling regime of putting up “imitation” elections. According to Karimli, these upcoming elections are not even that if comparing to the presidential elections in 2013 and parliamentary elections in 2015.

If Karimli is right, the government is also likely to continue curbing freedom to information access. With May 2017 court decision to ban most independent media sources, Facebook remains as the only platform for any kind of independent and opposition opinion to be voiced. However, the recent statements from the CEC targeting social media ring an alarm as to possible blocking of some of the social media platforms come April.

While so far, no such steps have been taken, recent “hacking” attempts of popular opposition figures’ Facebook pages, DDoS attacks against independent news outlet Meydan TV’s website and hacking of its Facebook page are indicative of certainly alternative measures put in practice to control or limit some of the information.

The ruling New Azerbaijan Party has close to 700,000 members, according to party statements, giving them ample manpower to deploy trolls and bots, when the right time comes. Observations of Azerbaijan’s online activities just in the past month give ground to assume that the use of trolls has certainly increased. Trolling doesn’t stop online, as Azerbaijani authorities are known for using teachers and others, especially during the course of elections, to engage them in carousel voting, mass ballot stuffing and inflating voter turnout.

The grave scene of pre-snap elections Azerbaijan gets grimmer as one notices little to no international reaction to the sudden news. While another oil dictatorship across the globe, Venezuela, after calling for snap elections in January 2018, has faced tremendous backlash from the United States and various international bodies, Azerbaijan fell off the radar. Will this mean that Azerbaijan is about to drop to a new low unnoticed as its former big brother Russia is stealing the show?