The Balkan Trabant on the streets of Europe 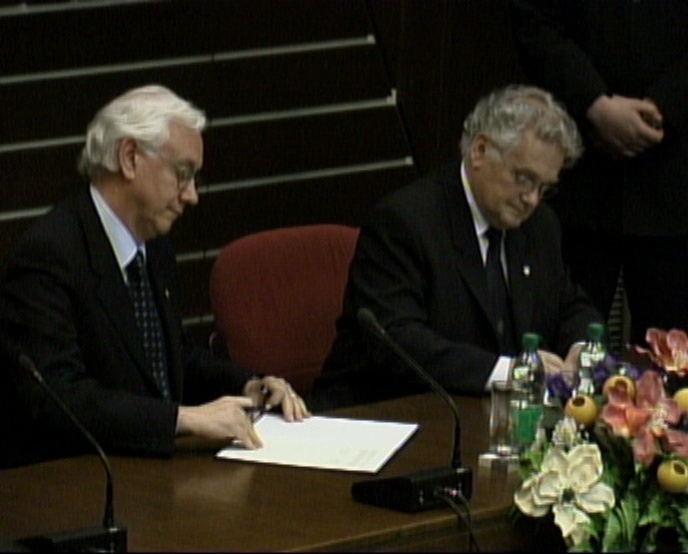 Published below is the Sarajevo's mayer's speech, Muhidin Hamamdzic, which took place during the presentation in the Bosnia capital of the appeal "Europe beyond the borders"

I would like to take this opportunity to welcome you all once again and to thank you for attending this beautiful event. Allow me to welcome the participants of this gathering: the President of the European Commission, Mr.Romano Prodi, the High Representative, Mr. Wolfgang Petritsch, representative of the Congress of Local and Regional Governments of the Council of Europe, Mr. Christopher Newbury, the Mayor of Venice, Mr. Paolo Costa, President of the Italian Consortium of Solidarity, Mr. Giulio Marcon, Director of Observatory on the Balkans Mauro Cereghini, Regent of the Peace Bell Foundation, Mr. Pietro Monti, and other honourable guests and friends.

I am particularly happy to have with us His Excellency Romano Prodi, one of the most active initiators of the "Beyond the borders of Europe Appeal", which we are signing today in Sarajevo. I would therefore like to offer my particular gratitude for all he has done to ensure that this extremely valuable initiative should finally attain its goal.

The subtitle of the Appeal reads, I quote, "for an integration of the Balkan area into the European Union: certain, sustainable, from the bottom up. This is the essence and the best guarantee that this Appeal will not be yet another exercise in futility.

My personal opinion is that the right formula has been found for the integration processes which have to start or have started, exactly from the local level, the level of the city and the region, from the bottom upwards, as the Appeal indicates. I am convinced that the time of grand, glamorous diplomatic missions, of geo-political plans and divisions into spheres of interest is long gone and part of the last century.

Citizens make the best diplomats. Ordinary people. Tourists. Curious individuals. People who build links with others like them, people who like the same thing: life! Let us recall that, after all, the Berlin Wall was truly undermined by the East German who drove his Trabant, casually, just like a tourist, across the "Iron Curtain". A tiny plastic Trabant opened the road for all those who were to follow across the same line.

I can tell from personal experience that the most successful diplomats, in addition to teenagers and people in love, are factory managers, private businessmen, heads of municipalities, people who work in local governance and self-governance, and allow me to say, mayors too. To put it in simple words: people from below, from the core of society, who identify common interests and goals through immediate, unhindered and sincere contacts. Every living organism is made up of cells first-once those billions of cells merge harmoniously, and only then-there is a living creature. A functioning living organism.

I am convinced that the same goes for sustainable and effective integration of the Balkans and the great European community. Cities, municipalities, communes, regions, those are the true bases that will contribute to the realisation of all the goals set by the "Beyond the borders of Europe" Appeal.

As far as Sarajevo is concerned, this process started successfully quite some time ago: That is why I know, from our own experience, that it will succeed.

The reason is a simple one: life is indestructible.

The Balkan Trabant has been on the highways of Europe for a long, long time.