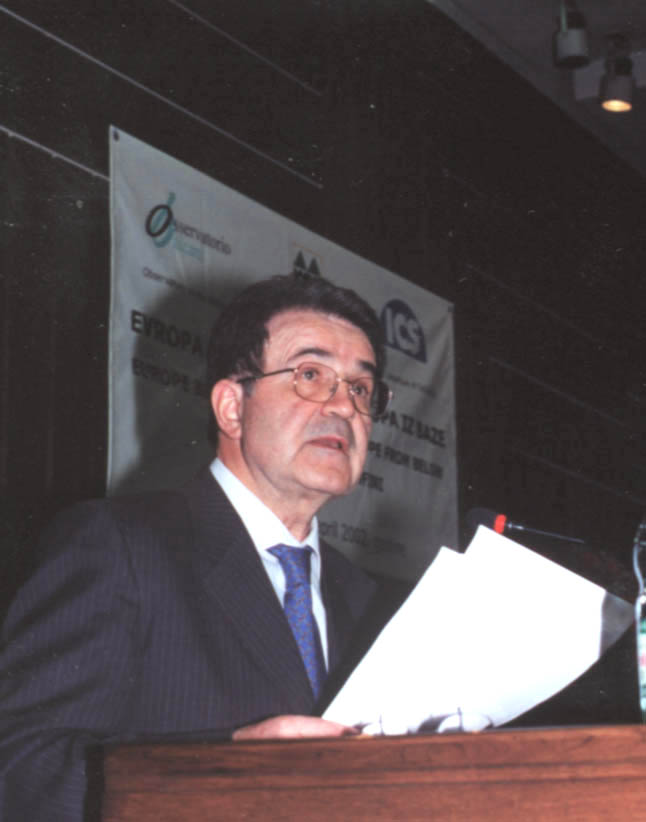 For Europe, the 20th century was born right here. And always in this city the 2oth century endend with our offer to Bosnia and Herzegovina of a perspective of integration in the EU, which today's appeal is the most relevant

Romano Prodi's speech of 6 April in Sarajevo is published below. It was very important moment which took place after four days of strong mobilisation from below, ten years after the beginning of the war in Sarajevo and in Bosnia Herzegovina.

The 6th of April is a symbolic anniversary for Bosnia and Herzegovina, and for Europe as a whole. Ten years have passed since the fateful day when the siege of Sarajevo started.

During the 43 months of siege (the siege lasted), 10 000 people lost their lives and 50000 were injured in Sarajevo alone, while more than 200 000 people were killed throughout the country. The heroism of the people of this city will not be soon forgotten.

It was a harrowing time for us all. In one part of Europe, historic decisions were being taken to step up and expand the process of integration. And in another, the sounds of gunfire and shelling were drowning out the voices of dialogue and cooperation. In Europe, we thought war was unthinkable. After all, there was the Schuman Declaration, and European integration was a success. And then the war broke out and I humbly admit that we should have stopped the war, but we did not. In those cruel months, the reasons for the European project and the need for a stronger, more united Europe became all too clear.

The wars in the Balkans drove millions from their homes, often in horrific circumstances. The newly established nations - Bosnia and Herzegovina first and foremost - have a duty to right this injustice if they are to achieve stability and long-term sustainability. Since then, Bosnia and Herzegovina and the whole region have moved forward from war to peace, from a state of conflict to normality.

Like all countries in the Balkans, Bosnia and Herzegovina is now quite different from what it was ten years ago when the war blew up in this city. It has undergone a transition from a socialist political system to an emergent democracy, from a planned economy to one driven by a developing market. All countries in the region have had to recast themselves as independent States. For many, this is the first taste of independence in their history, and they have had to search for their place in Europe's family of States and peoples. Together they have started a new chapter in our common history.

We all know how closely the continent's history is tied up with that of these lands. For Europe, the Twentieth Century started here, on 28 June 1914, with the assassination of the heir to the Austrian throne. And that century ended here too, when we offered Bosnia and Herzegovina - and the whole region - clear prospects of integration into the European Union. These prospects are at the political heart of the European Union's Stabilisation and Association Process for the countries in the region.

The history of Bosnia and Herzegovina is like a potted version of Europe's own. You have squeezed 100 years of history into one decade. But history moves on with every day that passes, and with it our outlook must change too. The real progress we see after a war is in people's minds and attitudes. After the Second World War, the Marshall Plan and the international assistance could not have been so successful without a profound change in outlook. It took an enormous effort of will for countries in Europe to overcome the divisions of the past and cooperate fully in their mutual interest, for the sake of peace and the welfare of all their citizens.

The post-war situation in the Balkans is encouraging a new political outlook among the population. This process is often harder to carry through than putting up buildings. And that is still not finished. But we must remember that a new attitude is vital if peace is to be preserved and progress made.

The return of refugees is a precondition for normalisation and stability. Confrontation, nationalism and extremism must give way to a new outlook. Let me make that clear: in a united Europe there is simply no place for such attitudes or for those who hold them.

European integration has allowed us to cast off this narrow mindset. We no longer see ourselves solely in terms of nationality, community or State. In the EU today, we are citizens both of our own nations and of the Union. It is no longer a problem to be members of a minority in a State where the individual's rights are recognised as such - not because we belong to a particular ethnic, religious or linguistic group. Where the rights of groups and organised civil society are recognised too.

In an age of globalisation, a united Europe is also the best safeguard for national, regional and cultural diversity. Because the European Union is founded on diversity, not on uniformity. The European Union is an "alliance of minorities". European integration is a process by consent. It demands that States and peoples make an effort to understand the views of others, not force their own views on them. We have come a long way from the time when big and powerful States could unilaterally impose their political and economic will on the weaker ones.

The European Union is founded on dialogue, cooperation and mutual respect. Dialogue, cooperation and mutual respect are also vital for the future of Bosnia and Herzegovina. There is no reason why the communities that make up this country cannot cooperate in their common interest - for the sake of a better future for all. Just as many other former enemies are doing so successfully within the Union.

Dialogue and cooperation are just as crucial to Sarajevo as they are to Europe. And Sarajevo, the European capital of an European State, should stand as an example of multi-ethnicity. Regional cooperation is the key to lasting peace. The former Yugoslavia has now gone for good. It is part of the past. All the region's countries have gone through upheavals, and democratic, reformist governments are now in power everywhere. But the natural bonds of language and the geographical ties that link people throughout the Balkans should serve to strengthen internal political and economic reforms.

Each country holds its destiny in its own hands. But the integration of the whole region is in our common interest. The Balkans must become a focus for integration and cooperation once more - not of division and confrontation. We cannot just apply bilateral strategies designed for individual countries. Such strategies will be necessary, but they must be underpinned by a comprehensive strategy embracing the region as a whole. This balance between helping the countries make progress at their own pace, and having a clear policy for the region as a whole is a fundamental aspect of the European Union's Stabilisation and Association Process.

Admittedly, all this takes time as well as determination and patience. The conditions for membership and integration into a wider Europe are crucial to bringing security and lasting peace to the region. Closer integration also carries obligations, and the countries need to show that they share the essential values of the Union. We do not want new, permanent divides splitting our continent into a mainstream and a backwater, with some countries making fast progress while the others lag behind. We do not want areas of stagnation developing in the Balkans because of quarrels and rivalries from the past.

The Dayton Peace Agreement has brought recovery and reconciliation to Bosnia and Herzegovina. It has preserved the peace in the country for over six years now. Hopefully this will continue for generations to come. And the recent agreement on the reform of the Entities of Bosnia and Herzegovina, ensuring equal rights for all ethnic groups throughout the country, shows that a compromise can always be reached. We all know that many compromises are needed to ensure further progress, here and in the other countries in the region. Following on from the Dayton period, Bosnia and Herzegovina has now entered the European phase of its development.

In this context, new internal frontiers are not in the interest of Bosnia and Herzegovina. It is not in the Balkans' - or Europe's - interest to let the process of fragmentation go on. Any further redrawing of maps would simply trigger a new cycle of break-up and disintegration. Instability and underdevelopment would continue and the Balkans would fall into the hands of another set of gangsters and warlords. We cannot allow new barriers to be put in place. Instead, we must foster cross-border dialogue, cooperation and communication.

The process of integrating Bosnia and Herzegovina - and the Balkans generally - into Europe's political structures has furthered the peace process, because this strategic aim is supported by all ethnic groups and practically all currents of political opinion. The integration of Bosnia and Herzegovina - and of its Bosniac/Muslim community - into the European Union would also be culturally enriching for the Union. Some see us - wrongly - as an exclusively Christian society.

But these processes call for commitment and responsibility locally. Integration into the European mainstream does not mean giving the Union the task of solving the problems and removing the obstacles. This depends largely on the goodwill and openness of the communities and the peoples on the spot.

A future within Europe for Bosnia and Herzegovina lies in the hands of the peoples of this land.