Initiatives in Sarajevo: the Obsevatory on the Balkans' voice 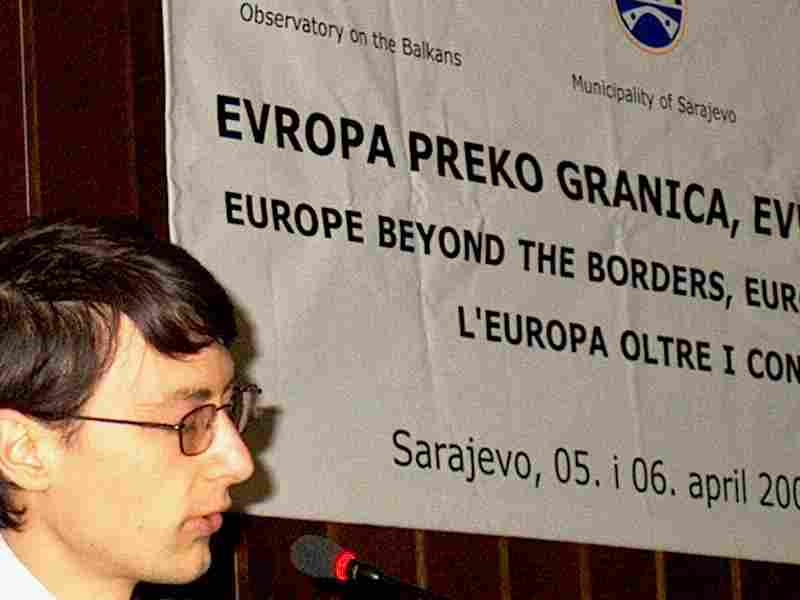 Published below is Marco Cereghini's speech, director and co-ordinator of the Observatory on the Balkans, which took place during the meeting with President Prodi in order to present the appeal on the integration of the Balkans in Europe

I would like to thank you all for coming and I confess that I am profoundly moved to see what a long way the Appeal which we are presenting here today has gone, the consensus greeting it in the months following its publication and how many people have come together in this room to support it.

Yet it is an ambitious Appeal, setting a demanding but necessary objective: the entry of all the countries in the south-eastern area into the European Union, according to a certain time schedule, adopting sustainable forms and processes which involve the whole community and not only their highest representatives. This is the "Beyond the Borders of Europe" which we and the many signatories of the Appeal dream of.

And it this "Beyond the Borders of Europe" which we all feel the need for, even more so today when faced with dramatic scenes of violence in nearby lands. Because while the fire of violence must be extinguished, this cannot be done with fire, but only with the coolness of reason and politics. Hence also with new ideas and suggestions for the future of Europe, stretching beyond its actual and limited frontiers. A future in which Europe will be even more authoritative, capable of offering a strong polarity within an international community which at times seems a little too helpless. A future in which the nature of Europe, as the coming together of innumerable minorities, can give it the cultural tradition and political force to construct a dialogue with the Mediterranean, with the Orient, with the many faces of the South and with the West itself, needful of a secure link to civilisation in order to avoid constructing new walls around itself.

In these dramatic times there is a thread which joins together Jerusalem and Sarajevo, cities whose history and present-day situation is marked by a parallel destiny, cities where the meeting of great civilisations has given rise to extraordinary culture and syncretism but which have also experienced great tragedy. Thus we wish to link, at least symbolically, Sarajevo, the "Jerusalem of the Balkans", with the afflicted Jerusalem of these times. Here too, the need for Europe is strongly felt, just as we feel it here today for Sarajevo and all the Balkans, asserting that only rapid and certain integration can help to definitively close the history of these last ten years. However we are convinced that integration can also help the rich and peaceful part of the old continent to find the underlying roots of its common project, which goes well beyond the mere financial or economic dimension.

Hence different reasons have led us to launch this Appeal, which concern these lands just as much as our countries, because to use a metaphor which is dear to many, the Balkans are the mirror of contemporary Europe, not the photograph of the Europe of the past. Just as it is difficult for the countries on the eastern shores of the Adriatic to find themselves outside the common European home, for those who are inside the absence of these countries is a deprivation; Europe without Sarajevo, or without Belgrade, Tirana or Zagreb, is a Europe halved. The text of the Appeal which we present here instead suggests rapid integration, in order to give the Balkans an idea for the future, a certain home which goes beyond the survival of the micro-states which have been created recently, at the same time breaking the chain of territorial demands as soon as possible and defining stable institutional structures which can overcome the current subdivisions of states, bringing them together in broader coalitions. Small countries and great horizons can coexist only within a broad and pluralist container such as Europe, which represents the coming together of many minorities.

The Appeal also indicates the need for integration which is sustainable, namely which can guarantee the stable development of the countries in the area. This development should be based on the characteristics of the cultures and of the local areas, rather than on the transfer of production from wealthy European states in order to escape the environmental and social rules which they themselves have imposed. Hence development centring on the area, where the economy has much to do with local government, with jointly responsible federalism, with subsidiarity and with individual responsibility.

Finally the Appeal indicates the development of relations between communities, between individual countries in the south-east and north-west of Europe, as the best way of immediately putting into effect the process of integration. Before and alongside governmental route, because this is what has been done - also according to the extensive experience of associations, local institutions and NGOs represented here - in these years of contradictory presence of the official international community in the Balkans.

Hence "Beyond the Borders of Europe". A dream for the distant future, but also a political horizon for the near future, because while it is true that the construction of the European Union has taken almost fifty years, it is equally true that in the current era time-scales have also changed: what was once measured in decades today can be achieved in a few years. Little more than a decade has passed since the Berlin wall fell, but the terrorist attacks of 11 September marked an epoch-making turning point for the system of international relations. This has not led, as the terrorists desired, towards the presumed "clash of civilisations". On the contrary, it is to be hoped that it may open the door to a Europe and to a world which is capable of going beyond the old frontiers.

It is with this hope that I wish to bid you farewell, Mr President. This evening, symbolically, the Philharmonic Orchestra of Sarajevo and the Haydn Orchestra of Trento and Bolzano will play together in your honour, demonstrating how music too can contribute towards bringing together minds and territories. I would like to fix an appointment - for you and all the guests gathered here together - to meet again in a year's time, to see how far we will have succeeded in moving "beyond our frontiers". We know that your job will be particularly difficult and that there may be considerable resistance towards further extension of the common European home. However the tragedies of the past, the needs of the present and the hopes and opportunities for the future lead us to emphasise that this is the right route to follow.