Europe from below - Welcome to Sarajevo 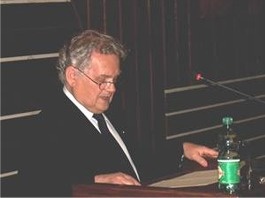 Published below is the welcoming speech by the Sarajevo mayor, Muhidin Hamamdzic, held on April 5 2002 in Sarajevo gathering numerous participants for the conference "Europe from Below".

Excellencies,Ladies and gentlemen,
Dear guests of Sarajevo,Dear friends!
On behalf of the Administration of the City of Sarajevo and on my personal behalf, I would like to welcome warmly all the participants and guests of this international conference titled 'BEYOND THE BORDERS OF EUROPE, EUROPE FROM THE BOTTOM UPWARDS'.

I would like to emphasise that I am particularly happy that it is taking place in this city at the time when we are marking the most significant date from its tempestuous, yet glorious past.
A warm welcome and gratitude for attending this conference goes to: Deputy Speaker of the European Parliament, Mr. Jorgos Dimitrakopulos, representative of the Congress of Local and Regional Governments of the Council of Europe, Mr. Christopher Newbury, President of the Italian Consortium of Solidarity, Mr. Giulio Marcon, Regent of the Peace Bell Foundation, Mr. Pietro Monti, and other distinguished guests and dear friends. I thank you all for joining us on this very special occasion.

Dear friends, I welcome you to the city that deserves the central place in the Balkans in so many ways. However, not in the Balkans as the stereotype, not the Balkans as the 'powder keg', not the Balkans as the 'anteroom for cholera', not the Balkans as something Europe should be ashamed of and fearful from. Sarajevo is the centre of a new, better, more beautiful Balkans, which have always been part of Europe. Especially now, after resisting and surviving, despite all the hardship that struck. Citizens of Sarajevo have witnessed an extensive movement of Europe of citizens, Europe of ordinary people, who expressed their solidarity and support throughout the war" not only by sending food and clothes, but by coming here, literally arriving only to be bombarded. Every European public figure of high moral standing came here during the 1000 days of siege, of suffering and destruction.
It was a courageous way to support the very thing that we expect from this gathering, the thing we are fighting for. We want Europe without. borders or divisions, Europe which is entering its second age of renaissance and humanism in the 'quattrocento' of the 3rd millenium. I am convinced that this millennium will have its own Michelangelo Buonarotti, its own Leonardo da Vinci, its own Petrarca, Boccaccio...
Sarajevans know from personal experience that every border, every boundary, merely narrows down our outlook and closes dawn our perspective. Every boundary means a blockade. And that's why boundaries are made: to lock, to hinder contacts, to divide and separate not only territories and material goods, but rather to divide peoples and ideas first. Borders are monopolies and blockades. In this millennium, they are not only anachronous. They are biologically, i.e. in substance, simply unsustainable.
That is why the idea of Europe beyond borders, of Europe without limits, of Europe which tore down its Berlin Wall appeals to Sarajevo, and we welcome it and support it. And we expect you, dear friends, to help us act together and tear down such walls, those in Sarajevo and in Bosnia, which are there to separate us, to divide us. For if they stay, they will methastasize and jeopardise all your wishes and all your efforts to see a United Europe of happiness and freedom of man and citizens.
Thank you for being here. Rest assured that we are here with the same task, to tear down the walls that serve as frontiers.