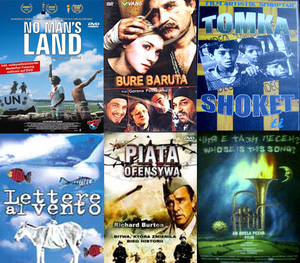 Another European history: Balkan cinema industry and its protagonists from the Seventies to date. A new dossier by Osservatorio sui Balcani

The research project is aimed at studying Balkan cinema in a comparative perspective in six countries of the region (Albania, Bulgaria, former-Yugoslavia). Thanks to a team of young researchers, Osservatorio sui Balcani plans to explore the history of cultural industry, an industry that more than any other shaped the collective imagery of the societies under scrutiny. The analysis of the cinema industry provides indeed a rich insight into both socio-political and economic-technological changes in the latest 30 years.

The research project will address both the transformations of the cinema industry and the experience of the people working in it (directors, screenplay writers, actors, producers...), thus exploring History through the individual histories of its protagonists.

Widening the knowledge of European history.
Contrast negative stereotypes by proposing a complex, not superficial view of the Balkan area.
Contribute to the development of social and cultural historiography.

Organising a workshop and a public event to present the research outcomes.
Publishing part of the research in Italian on Osservatorio Balcani's webpage and/or the magazine of Trento's Historical Museum.
Publishing the main results in Albanian on Perpjekja magazine, and possibly in other local languages.
Publishing the main results in English on one or more academic magazines, e.g. East European Politics and Society or Journal of Southeastern Europe.