Road to peace in Nagorno Karabakh & the role of the EU 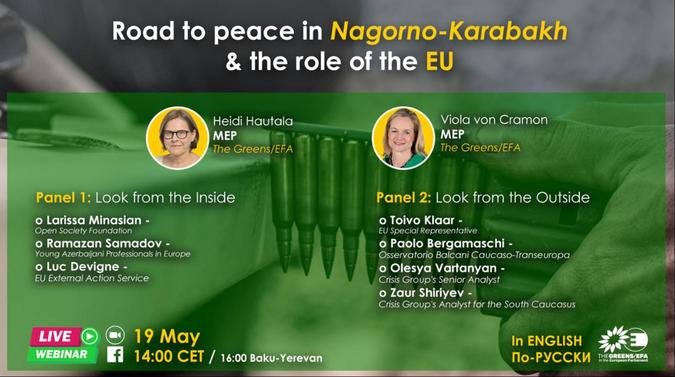 In this webinar, organized by The Greens/EFA in the European Parliament and OBC Transeuropa, we aim to look forward and to work towards a solution where a new round of hostilities will not take place in the region of Nagorno-Karabakh

On 10 November 2020 the guns fell silent after yet another round of hostilities in the region of Nagorno-Karabakh, leaving, according to some estimates, 5000 dead. This will be added to the 30,000 who perished some two decades before, fighting the same fight.

In this webinar we aim to look forward and to work towards a solution where a new round of hostilities will not take place. To do this, we aim to answer questions, such as

○ What is the state of play as regards the implementation of the trilateral agreement?
○ For how long is the status quo sustainable?
○ How can international actors contribute to a sustainable dialogue?
○ Is the EU willing to adopt and develop a credible policy for the South Caucasus?

The European Union can and must take action to support peace and stability in the region, especially as there are others who actively seek to destabilize it.

At this webinar we will hear voices from Azerbaijan and Armenia, from European Union as well as from elsewhere.

PANEL I - 14:00: Perspectives from local and national level

PANEL II: 15:15 Role of the EU and the international community

The webinar will be streamed on Facebook and on Zoom (Register now  to the webinar).