Agricultural policies in South East Europe: which ones? 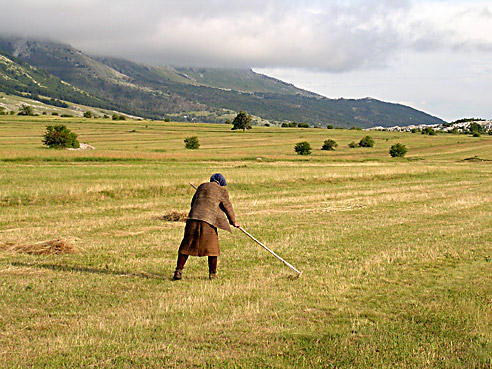 A step by step analysis of the agricultural development policies in South East Europe: from the process of collectivisation in the 40s, to the much reduced production capacity during the conflicts of the 90s, up to the agricultural models linked to the European Union

After having marginalised the agricultural political agenda for many years, South East Europe is now gradually starting to re-formulate the roles of agriculture and rural areas. Even though the main objectives still converge towards the technological upgrade of the sector and the reinforcement of some parts of the production chain, a certain openness towards environmental matters, sustainability issues, and measures clearly inspired by the European Community are beginning to emerge.

Besides sticking to old and new priorities, and re-defining the objectives of the production system, there is also a need for greater involvement and coordination of all the actors in this sector, especially in order to include rural producers and workers in the decision-making processes.

The Balkans have been marked by an extremely complex transition process that, for some countries, still hasn’t ended. In many cases the shift from a planned to a market economy was temporarily frozen by civil wars and social conflicts. Even compared to Central and Eastern European countries (CEECs), the Balkans show significant differences.

According to the OECD (2001), the transition in the CEECs can be traced back to three moments: the liberation of prices and markets by abolishing the controlled pricing system, the production objectives determined by central governments and the monopoly on trade (early 90s); the reintroduction of tools for governing the agricultural sector by implementing new policies for the support of prices and markets (mid 90s); the gradual move towards the political-administrative Community framework (late 90s).

In the Balkans, these phases, which generally occur according to a fairly linear temporal and technical evolution, have been fragmented and have often ended up developing in a contradictory manner. Even the starting point, if compared to some countries in the Central European area, isn’t all that similar. Yugoslavian socialism foresaw more room for private initiative compared to other countries of the socialist block. For instance, by analyzing data on land ownership, it’s clear that the most extreme phase of the collectivisation process, launched at the end of the 40s by 'recruiting' more than 2 million farmers, was actually abandoned as early as 1952 and in the 80s more than 80% of the land was in the hands of about 2,9 million minor owners (S. Bianchini, 1998).

The public sector, which included cooperatives and businesses managed directly by the government, was composed of large agro-industrial complexes (agrokombinats) where production was linked to the transformation processes. State cooperatives and businesses were concentrated in the most productive areas of the country, such as Vojvodina and East Croatia, and absorbed almost all the investments and aid for this sector. The peripheral areas were of course penalised by this kind of policy-making.

But the differences shouldn’t just be looked at in a historical context. Going back to the 90s, the conflicts damaged the production capacity, worsening the situation and forcing productivity to 'run after' the standards dating back to before the transition in terms of production and profits. Lastly, a further element that chracterised the Balkan transition was the strong presence of non-governmental organisations. Together with the international organisations in the territory, they encouraged - albeit with variable results - the opening up towards new models for managing agricultural and rural systems. An element that did not typically exist, at least not in such a significant way, in Central-Eastern Europe.

In the 2000-2010 decade the level of protectionism in all countries was gradually reduced, mainly due to the implementation of the CEFTA 2006 - Central European Free Trade Agreement1. Substituting 36 bilateral agreements, it was signed in December of 2006, by all the Western Balkans plus Moldova, thus affecting a market of almost 27 million consumers.

The CEFTA has enabled a step ahead containing trade barriers and increasing transparency, therefore contributing to the overall growth of exchanges on a regional level, representing an important step towards the complete integration with international markets. Although not directly connected to the WTO, signing the Central European Free Trade Agreement means complete respect of the principles dictated by the World Trade Organization, of which, as of June 2011, only Albania, Croatia and Macedonia are members. For Bosnia Herzegovina, Montenegro, Kosovo and Serbia, negotiations are underway, with the entrance of Serbia expected by the end of 2011.

Among the measures taken for the protection and support of markets, all countries except Kosovo use trade barriers, while other measures are used on a more ad hoc basis: Croatia uses market interference (for example, defining quotas for specific products), Serbia uses subsidies for exporting goods (forbidden by the WTO except for some products which are recognised and therefore given special treatment) and Bosnia uses administrated prices (T. Volk, 2010).

Although far from the level of aid guaranteed to farmers within the European Union, the agricultural budget being in almost all countries considered is (slowly) growing. Nevertheless substantial differences remain from country to country: Croatia registers greater payments per hectare than those of many EU member states (T. Volk, 2010), while Kosovo still shows very few resources and the overall number of projects financed by international organisations and NGOs outnumbers local government aid (Agriculture, Forest Activity and Rural Development Ministry, 2009-2013 Programme for Agricultural and Rural Development).

This process of consolidating public aid with agriculture risks being subject to further delay due to the international financial crisis. Between the last quarter of 2010 and the first half of 2011 the crisis has been gathering rather significant proportions in many countries of this region. Not by chance the spring of 2011 was marked by tensions between professional organizations and governments, such as protests by the Serbian farmers who saw their aid being substantially reduced: in 2010 alone they had in fact seen the subsidies per hectare reach €144, up to an allotted maximum of 100 hectares.

The reduction proposed by the government is not expected to affect the overall cost per hectare, still at 14.000 Dinars (a little less than 140 Euro), as much as the allowed arable land, that should be reduced from 100 to 10 hectares. An extremely radical cut that, irrespective of the results of the negotiations, is representative of one of the main problems of agricultural policy in the countries of this region: the lack of stability and consistency. The variations on an annual basis are so significant, and frequent, to make farmers’ choices very difficult. This is mainly due to the lack of certainty regarding the priorities chosen by governments and the tools that these same governments make available to farmers.

As for measurements, in the budget destined towards agriculture and rural development, the method most used is that of direct payments based on the following options: from payments for input (Serbia), to payments for output (Bosnia), to those based on arable land and number of animals (Croatia and Macedonia). The divide between such measurements and those destined towards the support of rural development and structural actions, although smaller, is still a very large one.

Even though rural development policy is still secondary to that of agricultural policy, the balances are shifting, even in South East Europe. Resources have slowly begun to be transferred from the primary sector to land development and are therefore being aligned to the model chosen by the EU and OECD countries: transfer from sector policies (agriculture) to land policies (rural development in a broader sense).

In this process the agricultural sector, often still the most important in terms of employment and economic power, becomes one of the activities and no longer the only defining element of an area, especially not the only one upon which to base strategic choices for local development.

Concepts such as integrated approaches and multifunctionality, are already broadly acknowledged by development strategies and programmes. Unfortunately they still toil to find practical applications and therefore the initiatives that foresee business service production, from power to environmental services and tourism, are still quite limited.

But rural development is a complex policy that requires local institutions to be capable of managing and attracting financial support, involving private actors, identifying problems and elaborating strategies, proposing a medium to long term vision. Alongside the presence of efficient local institutions is the need for coordination among the different policies that deal with land management.

In reality one of the major difficulties that the countries in this area are encountering is linked to the move from centralist and extremely oligarchic forms of government to processes of governance based on the involvement of local communities and the different actors present on the territory and in the production chains. Basically, decentralisation and the beginning of dialogue, not only between private and public institutions, but also within the institutions themselves, require the creation of specific task forces and the collaboration between different ministries. Just think of environmental or energy issues. An important point of reference is the rural development policy adopted by the EU in which local action groups are considered as important representatives of their territories and as a connection between civil society and institutions.

Furthermore, alongside public institutions that often have difficulty listening and translating requests from civil society into government action, there are associations, professional organizations, cooperatives and NGO’s that are not very efficient, fragmented and therefore often lacking a significant voice for political dialogue.

If it’s true, with few exceptions, that the Balkans lack a consolidated tradition in the third sector, from the beginning of the transition, especially due to international aid, the number of small associations, fragmented and often in competition with each other has grown tremendously (Karajkov, 2008). This is also a partial consequence of the difficulties in coordination that usually characterise donors’ interventions.

The dependence on international aid has also had an important impact on rural areas because it’s brought these associations to concentrate their offices in cities where it’s easier to consolidate and maintain relations with financial supporters. Despite all these limits, civil society exists and is extremely active on many fronts. Thus, it is now necessary to coordinate the different initiatives, pull resources and skills together, in order to achieve greater effectiveness in providing a real contribution to planning the strategies for local development.

1 CEFTA 2006 substituted CEFTA, the members of which were Poland, the Czech Republic, Slovakia, Hungary, Slovenia, Romania and Bulgaria that left the agreement once they became members of the EU.