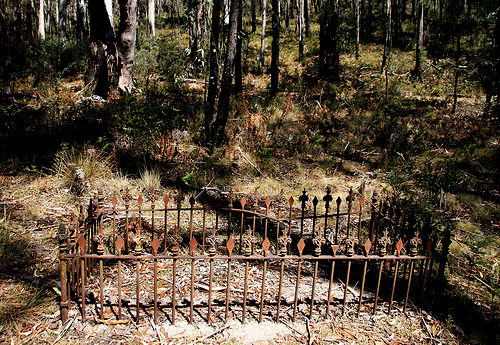 Inspired, not by the nightmare investigator Dylan Dog, though it could seem so, but by schemes already running in cities like Paris and London, the administrators of the Romanian capital Bucharest have decided to look to their cemeteries to revive tourism in the city

In its continual attempts to attract more tourists this time Romania is betting on its cemeteries, and the best known of these, the Bellu Cemetery in Bucharest, seems able, according to the authorities, to meet the needs, to satisfy the curiosity and stimulate the interest of potential visitors. Bellu is the cemetery with all the monuments, where some of the greatest artists and intellectuals of the country lie buried. 20% of the capital's historic monuments are to be found in it.

Since 2010 Bellu Cemetrey has belonged to the Association of Significant Cemeteries in Europe. The President of the Association, Luisa Yzaguirre, finds that in recent years the perception of cemeteries has changed as more and more people realize that cemeteries and mausoleums make up an important part of their history. “We wish to enhance the situation of the Bellu Cemetery in the European circuit of cemeteries”, states Yzaguirre. A delegation from the Association recently came to Bucharest to check the final logistic details before the inclusion of Bellu in this very particular European circuit.

While waiting for the European verdict, Bucharest is already in action. Last week, during the White Night of the Museums, the citizens of Bucharest had the chance to stroll among tombs and crosses. It was a great success. Romanians of all ages took the Cemetery by storm. Armed with cameras and videocameras, they lost no opportunity to “gain immortality” amid the tombs and crosses. In the dark and by fluttering candlelight the visitors were taken round funeral monuments and chapels by attendant guides.

“In the Garden of the Souls” repose great Romanian actors like Gina Patrichi,Toma Caragiu, Amza Pelea, Ernest Maftei, Gheorghe Dinica and writers including Mihai Eminescu, Mihail Sadoveanu and Nichita Stanescu. The President of the national network of Romanian museums, Dragos Neamu, explains how impressive the Bellu Museum collection is, containing as it does funeral monuments and statue ensembles created by great Romanian sculptors.

But there are also works by foreign sculptors, for example those of the Florentine Raffaello Romanelli fashioned in the early 20th Century. Among the artistic masterpieces Romanelli left in this Cemetery is the monument to the Poirineanu family with its sad legend: it is said that the brother and sister who grew up separately in France and Romania had the misfortune to meet in Paris and fall in love, unaware of their blood ties. On discovering the truth they committed suicide.

For those who love such romantic and tragic stories this is obviously a place to visit.

Virgil Rotaru, administrator of the cemetery complex of Bellu, during the White Nights recounted numerous anecdotes to the television companies who flocked there. The one, for example, of a youth exhumed 9 years after his death and the discovery that his electronic watch was still working. Or again, how the office workers at the cemetery were struck by a young woman who died in the 30s in Morocco, brought home in a lead coffin because “her beautiful red dress was still fresh and seemed just put on”, the cemetery administrator relates. And his tales certainly do not stop here. . .

The President of the museums network, Dragos Neamu, has however a more institutional approach. He recalls how in France for instance there are cemeteries set out like veritable museums and a great success. Part of the Bellu Cemetery, in his opinion, could quickly be turned into a museum, modelled on the famous Parisian cemetery, Père-Lachaise. “Because it offers a moment for reflection, a pilgrimage and at the same time for its aesthetic value,” adds Neamu.

The Bucharest press has noted the commitment to this question on the part of the capital's mayor, Sorin Oprescu. The municipal council of Bucharest this year approved two projects for the modernisation of the Bellu Cemetery. 8.5 million Euro will be invested for this. One of the projects will deal with modernizing the water and sewage works, lighting and a closed circuit tv of the Cemetery to monitor everything going on there 24 hours a day.

It looks as though this time the plans for the Bellu Cemetery will actually be enacted and not remain just an idea. Mayor Oprescu after all is not new to these, at times desperate, moves to promote tourism in the capital: some years ago he wanted to put gondolas on the River Dambovita, and it's still not clear what blocked his initial enthusiasm.

The Cult of the Dead

Of course Romanians have more traditions connected with the cult and the symbols of death than with gondolas. There is a rich cultural tradition related to the themes of life, death and religion. Mircea Eliade, writer and religious historian, took a great interest in these themes, as did Emil Cioran, the best known Romanian philosopher.

Cioran, who spent much of his life in Paris, in his “Heights of Desperation” affirmed that life does not exist while death is a state of sleep. “Life and I are two parallel lines which meet in death”. Among the things he missed from his native Romanian village, Răşinari, near Sibiu, was the cemetery. “I remember the cemetery of Rasinari so clearly that I could describe the position of one tomb or another,” wrote the philosopher in a letter addressed to his brother, Aurel Cioran, dated 3rd December 1973. And again: “After a considerable delay I received that beautiful photo with Mrs or Miss Ciucianu. I thank you. I met her and danced with her for a whole evening and then we strolled through the Răşinari cemetery. She was delightful”, in another letter addressed to his brother in December 1971.

Another Romanian cemetery which is already a mass tourism destination is the cheerful cemetery of Sapanta in the Maramures region. Here death is met with joy and this can be seen everywhere, beginning with the colourful crosses on which humorous lines have been written joking about certain pleasures of the deceased.

Another very interesting cemetery to visit, for completely different reasons, is the one in Bucharest dedicated to the heroes of the revolution of 1989. Here the tombs tell of young lives broken in their longing for liberty, on the 21st and 22nd December 1989. It is still not known however, in the ambiguity existing relative to those days, who the snipers were (and who sent them) who on those days opened fire on the demonstrators. “Killers not punished”, one reads on many crosses. Here too the visitor may meditate. But the authorities will probably not include it in the places to be promoted for tourism.