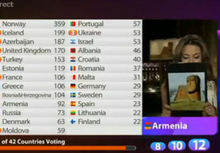 Already notorious more for its political block voting than even its kitsch and glitzy musical entries, nothing could have prepared anyone for the controversy surrounding the three countries of the South Caucasus in this year's Eurovision Song Contest

In February, the international song contest was already off to a bad start when Georgia, still fuming over the August 2008 war with Russia, decided to enter a retro disco track into the competition scheduled to be held in Moscow.

The song, 'We Don't Wanna Put In' by Stefane and 3G, mocked the Russian prime minister and was naturally considered unsuitable for the contest. Eurovision's organizers requested that the lyrics be changed, but Georgia refused. Besides, the country had initially considered boycotting the competition and the song had anyway enjoyed considerable international media exposure. Georgia instead decided to stage its own "alternative" music festival which was held concurrently in Tbilisi last week.

However, the first real attempt to politically exploit this year's competition had actually come in June 2008 when rumors started to spread that internationally renowned American-Armenian metal band System of a Down (SOAD) would enter the competition for Armenia. The band's front man, Serj Tankian, was quoted as saying SOAD would consider doing so if it could perform a song written about the 1915 massacre and deportation of 1.5 million Armenians living in the then Ottoman Empire.

A campaign was launched on social networking site Facebook to support the band's apparent Eurovision bid, and popular contest web sites even picked up on the rumors. Armenian nationalist blogs selectively quoted a Finnish journalist as confirming SOAD's entry as late as December last year while Turkish parliamentarian Akif Ekici believed the hype so much that he even tabled a question on the matter to Turkey's prime minister. By January 2009, however, it became apparent that the rumors were untrue.

The news came as a huge disappointment for many in Armenia as well as its large Diaspora, but rather than focus on who might instead represent the country, attention was turned towards finding a suitable scapegoat to blame.

With centuries of ethnic rivalry and hostility slow to die out in the region, it was obvious where one could be found. Distorting the actual chronology of events, prominent nationalists such as American-Armenian propagandist Harut Sassounian were quick to point the finger at Turkey, accusing it of manufacturing the SOAD rumors.

A few weeks later, when the actual Armenian Eurovision entry was decided in a televised national competition, all attention turned to how another set of rivalries in the South Caucasus might play out.

Although Azerbaijan didn't enter Eurovision until last year, it has nonetheless been highly critical of Armenian entries in the past. In 2006, for example, a complaint was lodged against Armenia's entry - Andre, a young singer hailing from Nagorno Karabakh. Yerevan and Baku are still technically at war over the disputed territory situated within the borders of Azerbaijan. Other years have also been accompanied by accusations that Armenia has "stolen" Azeri melodies, and many expected the same to be true this year. Surprisingly, however, it wasn't.

Instead, Eurovision had appeared to be devoid of the tit-for-tat accusations of the type defining earlier competitions. That is, until the first semi-final held last week in Moscow when Azerbaijan discovered that the presentation video for the Armenian entry included images of a statue situated in Nagorno Karabakh. After complaining to the event organizers, the image of the statue - considered to be the symbol of the territory and also used on its coat of arms - was reluctantly removed. However, Armenia's Public TV nonetheless plotted to display the image live on air during the final itself.

In an elaborate plan to have its presenter - last year's entry, Sirusho - stand in front of a video image of the monument displayed on a large LCD screen in Yerevan's Republic Square, the singer also had a photograph of the statue stuck to the back of the clipboard used to read out votes cast by the Armenian public. The singer, recently engaged to the son of former Armenian and Nagorno Karabakh President Robert Kocharian, gleefully performed her task and local bloggers happily documented much of the preparations for the provocation online.

Meanwhile, Azerbaijan had also decided to retaliate against its erstwhile foe in the South Caucasus by not displaying the telephone number for viewers to vote for Armenia's entry. True, few would probably have done so anyway, but Armenia did at least award one point to Azerbaijan. Even so, ethnic rivalry between the two competing nations was of course more noticeable than any symbolic gesture, with bloggers in Baku reporting that not only was the sound turned down for Armenia's entry in some local nightspots, but jeering occurred in at least one bar.

For most viewers outside of the two countries, however, the latest shots fired in the war between Yerevan and Baku over Nagorno Karabakh hardly rang out, although some did pick up on Armenia's blatant disregard of the earlier Eurovision ruling about the statue. Therefore, perhaps in an attempt to save face, nationalist bloggers in the country soon started to accuse Azerbaijan's act, Aysel and Arash, of displaying an image of a monument in Iran, even going so far as to accuse Baku of making territorial claims on its southern neighbor.

The station also made an official complaint against Azerbaijan for its removal of the telephone number necessary for viewers to vote for Armenia's entry, although that would hardly have made much of a difference. When all the votes had been tallied from the 42 countries competing from the European Broadcasting Union (EBU) on Saturday night, Azerbaijan finished third with 207 points, Armenia came in tenth with just 92, and Norway won the competition far ahead of the crowd with 387.

Predictably, however, the "battle" did not end when the competition did, with Aysel and Arash returning to Baku on a private jet named "Karabakh" while many in Armenia and its Diaspora applauded the decision of Public TV to disobey Eurovision's earlier ruling about the statue. And with one local newspapers in Yerevan now alleging that Armenia's Eurovision jury had been "pressured" into awarding a full 12 points to Russia, the controversy over this year's Eurovision certainly looks set to continue.

Yet, among the nationalist bickering to be heard from both sides, there are at least some voices of reason struggling to be heard. "Perhaps it's time to switch from this kindergarten approach to real conflict resolution?" asked one young Azeri rhetorically on her blog. "Our kids need fairy stories, not war tales - love, not hatred. Our kids deserve the peaceful happiness we never had."