A historic verdict: Italy's pushbacks to Slovenia are illegal 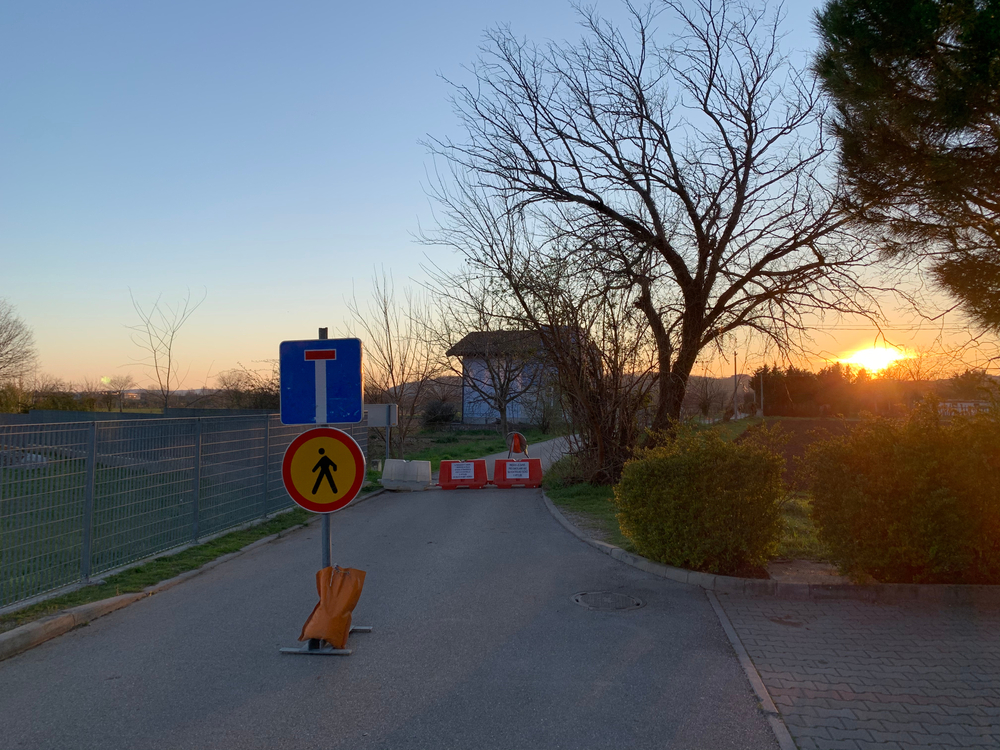 A border crossing between Italy and Slovenia (© Melodia plus photos/Shutterstock)

The application of the readmission agreement between Italy and Slovenia is illegitimate. This was confirmed by the Court of Rome, that accepted the appeal of a Pakistani citizen who had arrived in Trieste via the Balkan route and was then pushed back to Slovenia and then Bosnia and Herzegovina

On January 18, the Court of Rome granted the appeal of a Pakistani citizen who had arrived in Trieste along the Balkan route and, despite expressing his intention to apply for asylum, had been pushed back first to Slovenia and then to Bosnia and Herzegovina.

"The order issued last January 18 by the Court of Rome", explains the co-author of the appeal, ASGI lawyer Anna Brambilla, "is of fundamental importance, because it recognises both the illegitimacy of the application of the Readmission agreement between Italy and Slovenia to those who have expressed their intention to request international protection, and the illegality of refoulement due to the failure to assess the risk of undergoing inhuman and degrading treatment in subsequent chain pushbacks".

A bilateral agreement that dates back to 1996, never ratified by the Italian parliament, has been used with increasing frequency since 2018 by the Italian authorities to "formally readmit" migrants arriving on Italian territory from the Slovenian border: 1,301 in 2019 alone, as stated by the Minister of the Interior Lamorgese last January 13 during the question time in the Chamber of Deputies, in response to two questions relating to readmissions to the Italian-Slovenian border.

Technically defined by the Agreement as "readmissions without formalities", these are in fact illegal pushbacks that various Italian organisations and deputies have denounced for some time. And it is thanks to the network of associations in defense of human rights that the case arrived at the Court of Rome, with the appeal presented by ASGI  lawyers Caterina Bove and Anna Brambilla – the result of a vast network and a brutal history. 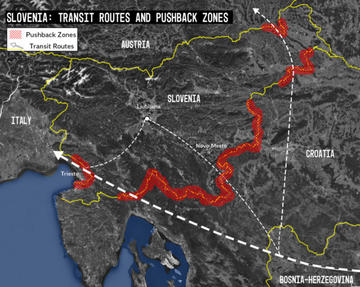 M. was born in August 1993 in Pakistan. He fled his country where he had suffered persecution because of his sexual orientation. After a long journey and through the Balkan route he arrived in Trieste in mid-July 2020, together with other compatriots. There, as the text of the order reports, a new ordeal: "All intended to ask for international protection. While some volunteers were helping them and treating their wounds, they had been approached by some people in civilian clothes, who presented themselves as policemen and asked them questions about their migration path”.

All expressed their willingness to seek asylum in Italy. Transported to a police station, they were made to sign documents in Italian, but instead of being taken to a reception centre they saw their rights violated again: "Their phones were seized and they were handcuffed", reports the text, "then loaded onto a van and taken to a hilly area (apparently on the Slovenian border) and they were ordered, under the threat of sticks, to run straight ahead, on the count of 5".

After about a kilometre they were stopped by the Slovenian police, who took them to a police station, where they repeatedly expressed their desire to seek international protection. Instead, according to the Order, after spending the night locked in a room, without food, water, and toilets, they were transported to a police station near the border with Croatia: "(...) they were made to lie down on the ground and handcuffed with plastic straps behind the back, searched, kicked, and beaten with batons. They were then made to cross the border and were taken over by the Croatian police”.

In Croatia they suffered further violence. "Beaten by officers with batons wrapped in barbed wire and kicked on the back", writes Judge Silvia Albano, "loaded into a van, when they arrived at their destination they again reaffirmed their desire to seek asylum, but were taken to the border with Bosnia where the agents began to count down, then started hitting them and sprinkling pepper spray on them, inciting their German shepherd”.

When in Bosnia, Adnan was taken to Lipa, a tent city 30 kilometres from the city of Bihać. Yet, as there was no room for him, he was abandoned in the open countryside. He then reached Sarajevo where, lacking an accommodation in an assisted camp, he still lives in a "squat" (an abandoned building).

From Sarajevo to the Court of Rome

The reporting of Adnan's case, as lawyer Anna Brambilla tells us, stems from the work of collecting testimonies and photographic documentation of the Border Violence Monitoring Network (BVMN) as well as from the interview with Adnan carried out by Danish journalist Martin Gøttske and published in the magazine Information. "But also", Brambilla tells us, "in general in this period we have received several reports that arrived directly from readmitted people, who had our contact thanks to word of mouth".

The decision to initiate an appeal in this case is based on two factors: "The fact that he had the possibility to recover his original passport, and therefore the possibility of signing a so-called power of attorney before a Bosnian notary to act on his behalf, necessary to start the appeal. And the power of attorney was also collected thanks to lawyer Mohamed Kučak", says Brambilla," and I want to mention it because I believe it is extremely important to give credit to all the connections that have made it possible to achieve this result".

The documents were filed with extensive documentation deriving from reports, complaints and testimonies from BVMN as well as Amnesty Internazional, Unhcr, Danish Refugees Council, MSF and Rivolti ai Balcani, along with inquiries from various newspapers such as The Guardian, New York Times, and Avvenire . "Together with the photos", added lawyer Anna Brambilla, "of the injuries resulting from beatings with batons wrapped in barbed wire, suffered before being readmitted to Bosnia. Furthermore, those scars are still visible today".

Judge Silvia Albano was asked by lawyers Brambilla and Bove to acknowledge Italian responsibility not only for the readmission from Italy to Slovenia, but also for the chain readmissions to Bosnia and Herzegovina, as "Italian authorities 'well knew' that once people were readmitted to Slovenia they were not allowed to access procedures in Slovenia, but were readmitted to Croatia and then to Bosnia after undergoing inhuman and degrading treatment".

The order issued by Judge Silvia Albano in response to this urgent precautionary procedure between Pakistani applicant M. and the Ministry of the Interior is very clear. As explained by Gianfranco Schiavone of ICS Trieste and member of ASGI: “First of all it clarifies that this young man, like hundreds of others, has been prevented from applying for asylum. This can never be prevented: it is a fundamental right, guaranteed by our Constitution in Article 10 as well as by legislation on international and European protection. Only later will procedures determine whether the asylum application must be processed, for example, in another country, therefore also in Croatia or Slovenia, but where the person has the status of asylum seeker”. From the moment the will to request international protection is expressed, the procedure provided for by the Dublin III Regulation must be applied.

The order also specifies: "(Readmission) can never be applied to an asylum seeker without even collecting the application – the practice violates internal and supranational legislation and the very content of the bilateral agreement with Slovenia". Plus, " forced escorting affects the legal sphere of the interested parties, therefore it must be ordered with a reasoned administrative measure that can be challenged before the judicial authority". Therefore, the right to appeal applies together with "the need for individual examination of individual positions in compliance with Article 19 of the Charter of Fundamental Rights of the European Union which prohibits collective expulsions".

“Another important point”, adds lawyer Brambilla, “is linked to the treatment suffered by the young man. The order specifies the violation of Art.3 of the European Convention on Human Rights , which prohibits torture and inhuman or degrading treatment". Judge Albano underlines here the responsibility of the Italian authorities, that by rejecting the Pakistani citizen put him in danger: "The Italian state should not have given way to informal pushbacks. The ministry was in a position to know – in the light of the reports by NGOs, of the resolutions of the UN High Commissioner for Refugees, and the reports of the most important international press organs – that readmission to Slovenia would in turn lead to refoulement in Bosnia and that migrants would be subjected to inhuman treatment".

"The judge therefore ordered that M.", concludes Anna Brambilla, "has the right to submit an application for international protection in Italy, and orders the competent administrations to adopt every act and measure, including an entry visa to our country".

+Europa deputy Riccardo Magi, who was the first to bring the question to the Italian parliament, stated: "With regard to the pushbacks practiced by the Ministry of the Interior, I asked to shed some light through a parliamentary question last July , asking for information on the procedures followed by the Italian authorities. In its answer, the ministry admitted to parliament that it was practicing 'informal readmissions', but later stated that it would not push back people seeking protection; the sentence patently denies it”.

Now Magi, voicing the request of all the organisations that have fought to denounce such violations, asks that "this inhuman practice be stopped immediately and it is made clear for the future that it will no longer be used".