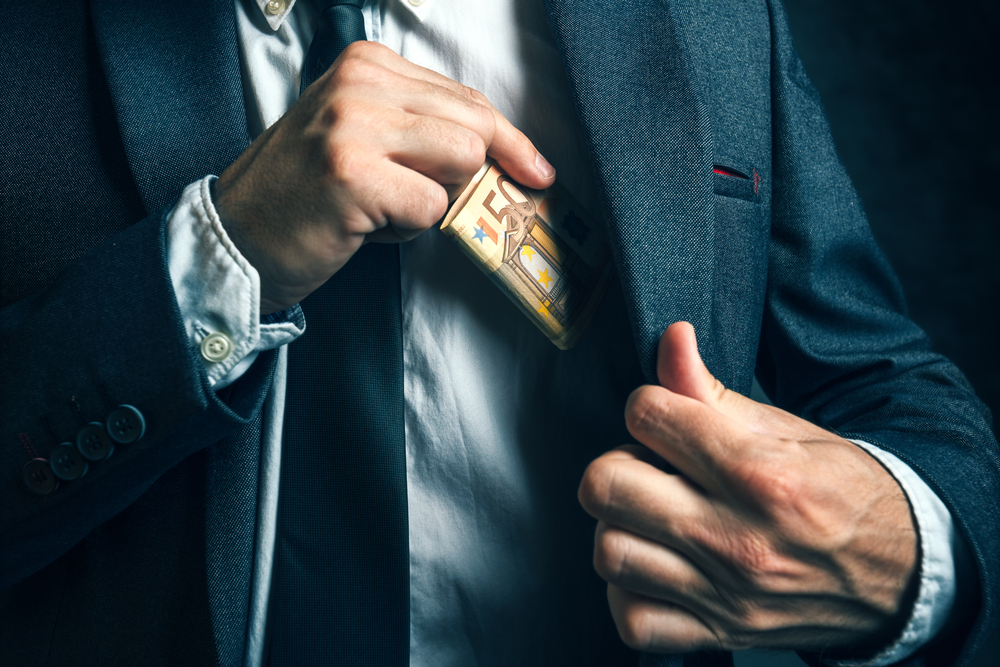 In Italy the direct public funding of political parties was abolished by the Letta government in 2013. At the same time, the reform tried to facilitate indirect forms of private or public funding, through tax deductions for donors, and allowing citizens to donate 0.2 percent (two euro for every thousand) of their own taxes. The reform also established a relatively high ceiling for private donations, fixed at 100,000 euro per year, compared to 50,000 euro in Spain, and 7,500 euro in France. The identity of donors is not subject to any ban: whether members of parliament or government, physical persons, companies, professionals, associations, foundations, political parties and movements (local or otherwise), or parliamentary groups. While foreign donations, from both public and private bodies, are banned, they are allowed for associations and political foundations, once the donations don’t end up in the coffers of political parties.

The 2013 reform brought significant change to political party finances, not only impoverishing them considerably (as this article by EDJNet's partner Openpolis explains), but also redrawing the map of political donors.

Until 31 January 2019 it was still possible to avoid (upon request of the donor) declaring donations below 5000 euro. However, the so-called “Spazzacorrotti” law (“corrupted sweeper”, law no. 3 of 2019) requires accountability for all contributions over 500 euro. The intention was to provide more transparent tools for tracing the provenance of political funding. From the quantitative perspective, the data is certainly more detailed, but navigating the labyrinth of foundations, associations and other bodies connected to political parties remains a complicated task

Analysing the data contained in the more than 800-page PDF made available by the Chamber of Deputies , mapping donations made after the law came into force (31 January) and updated in November 2019, the picture which emerges is admittedly partial, but nevertheless indicative of Italian political parties’ economic situation. The data provided by the Parliament does not include donations received from local seats, nor income received from other forms of funding such as the 2x1000 or registration fees (see the box below for a discussion of the methodology and structural limits of the analysis).

Notwithstanding the data’s incompleteness, the wealthiest political force in Italy appears to be Matteo Salvini’s Lega, with more than eight million euro collected in ten months. Very close behind is the Five Star Movement (M5S), with more than seven and a half million. Trailing behind is the Democratic Party (PD), collecting far less than half the sums collected by the leading parties (2,527,031 euro). However, it must be remembered that this data does not include donations from virtually any of the local PD branches. Forza Italia and Fratelli d’Italia received 1,680,203 euro and 1,095,898 euro respectively, while all the other parties, in total, received 1,953,673 euro.

The provenance of these donations proves even more interesting than the absolute figures. The Five Star Movement received almost seven million euro from its own members of parliament, Lega around five million, PD over two million, Forza Italia more than one million, and Fratelli d’Italia around 700,000 euro. Donations from physical persons (the second greatest source of funding by volume) often come from mayors, local administrators, politicians active at the European level, or people with known connections to political parties (for example, Paolo Berlusconi donated 100,000 euro to Forza Italia, and Antonio Tajani more than 40,000). Unfortunately, this figure proves difficult to quantify, as it turns out to be practically impossible to trace the identity of every individual donor. This is especially true of Lega, which seems to possess a large base of small private donors from whom it collected almost three million euro: it’s hard to say whether Matteo Salvini is a genuine success among “ordinary people”, or if his numerous local administrators and MEPs just happen to be particularly generous.

Currently, 72.2 percent of funds allocated to Italian parties come from members of parliament, 22.9 percent from physical persons and only 4.9 percent from private companies. 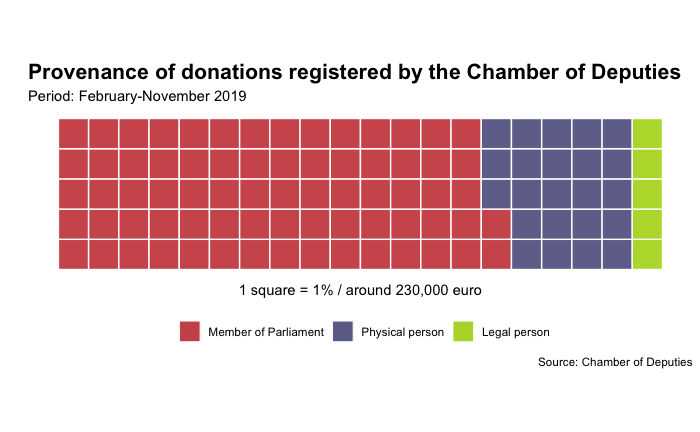 Nevertheless, donations from physical persons (often the founders or individuals directly linked to them) and private companies are not totally irrelevant, especially in the case of smaller parties (thirty minor associations and formations). For example, Giovanni Toti’s “Change Committee” received 211,200 euro, of which 200,000 came from companies. “Siamo Europei” (“We Are Europeans”), led by former Minister for economic development Carlo Calenda, received 397,243 euro from physical persons and 167,348 euro from legal persons, amounting to a total of 564,591 euro.

So, the vast majority of Italian political funding comes from the political sphere itself. This form of funding already exited before 2013, but after the reform it became the main source of party funding — guaranteeing their survival — and is now a form of self-financing through the partial transfer of state benefits (which remain relatively substantial, untouched as they are by the reform). At the same time, facilitating private financing seems to have had practically no effect, and Italian politics has become more vulnerable, subject to forms of external or illegal funding often linked to corruption and lobbying activities.

Turning to other countries in the European Union, the anomalous nature of the Italian model becomes obvious: the absence of direct public funding for parties. Spain and France, for example, have remained loyal to certain direct forms of public funding, such as the allocation of public funds on a proportional basis to elected parties, and the reimbursement electoral campaign costs. At the same time, the rules regarding funding from private sources are far more strict compared to Italy.

France bans cash donations from private companies tout court, while for all other donations there is a ceiling of 7,500 euro per year. Only at election time are the limits extended, by a maximum of 4,600 euro for the year. Spain bans all donations from legal persons and private associations (for single candidates, however, there is no such ban), and the limit for others is 50,000 euro per year, plus 10,000 during election years, for a maximum total of 60,000 euro.

How would such limits affect Italy?

Capping donations to Italian parties between February and November 2019 (which was not an election year) at 50,000 euro, and banning contributions from private companies, the Five Star Movement, Lega and PD would retain almost all of their funding. Among the larger parties, Forza Italia and Fratelli d’Italia are those which received the largest quantity of donations from private subjects, and donations above 50,000 euro. In the present scenario, they would have to forfeit at least a fifth of their funding. Generally, the economic situation for the major Italian political parties would only marginally change. The case is different for some smaller political formations: as explained earlier, they are often supported by few but sizeable donations. 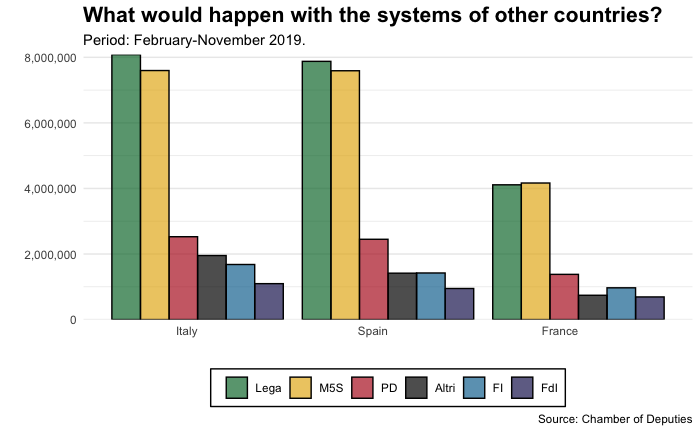 When the French rules are applied — banning donations from companies and enforcing a ceiling of 7,500 for all others — the situation would change radically for all parties, and the volume of funding would be more or less halved, due to the slump in donations from members of parliament.

Considering the data, in all likelihood an exception for elected representatives would have to be introduced: according to the data published by the Chamber of Deputies, it’s precisely these individuals who form the vast majority of “large donors” in Italy. Allowing donations from members of parliament, the impact of the French model on larger parties would be limited, and would only prove problematic for some newer or relatively small political forces.

More on these data

The law in force since February 2019 obliges political parties and organisations to publish on a monthly basis all donations which amount to over 500 euro in a given year. The Chamber’s relevant body is obliged to publish the data thus provided.

Our analysis is based on this data published by the only official, centralised source. While the data is certainly indicative of certain dynamics, we would like to highlight the shortcomings which, at least in part, render analysis more difficult, or show data which differs from that emerging elsewhere.