Turkey, theatre after the attempted coup

Turkey: the number of asylum requests has tripled over the last two years 18/12/2017 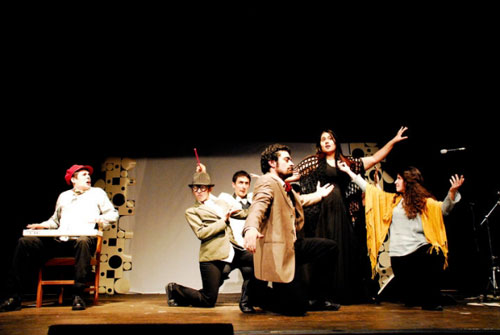 How can art react to the serious political crisis in Turkey? An interview with Semih Çelenk, theatre professor at the Dokuz Eylül University in Izmir

Chaos does not seem to end in Turkey. Gezi Park, the bombs, oppressive laws and purges by the government, war developing in the East, the terrorist activities of the FETO group, and the attempted military coup with the consequent declaration of a state of emergency. What do you think of this chaos?

I read the latest events as part of a wider, worldwide "chaos" that started during the '40s. The chaotic situations, the fear they generate, and the oppressive measures used to address them are the hallmarks of an authoritarian pattern recurring in history.

Through the creation of the perception of an external threat and an "enemy", with the constant feeling of an ambiguous and ever-present danger, it is easier to govern in an authoritarian and oppressive way in the name of stability. A state of emergency like the current one can be imposed with little resistance, along with repressive measures, and these dynamics generally follow the same lines around the world.

Can we say, though, that our country has a special geopolitical "position"?

At 50, I feel like chaos has reigned since I was 15. Military operations, armed conflicts, ethnic and religious terrorism – there has always been a threat. Whenever we make steps forward in terms of freedom and emancipation, the threat intensifies and "takes hostage" our daily life and desires.

When continuously faced with the dilemma – safety or freedom?, we obviously tend to favour the former. So, I repeat, even what we are experiencing today is part of the global dynamics of that neoliberal reason that now pervasively rules the world. If we look at how weapons circulate or policies tend to divide people, it is clear that governments are deeply involved in terrorist activities – those who blame terrorism are generally those who also foster it.

That said, it is true that Turkey has had its own peculiar historical development due to its geopolitical position, and this perhaps makes it more likely for conflicts to explode more violently here than elsewhere.

A military coup was attempted on the night of July 15th. How would you comment on that? Different interpretations immediately formed and it is difficult to discern among them...

It's true – the facts are clear, but it is difficult to understand the dynamics behind them, which probably will remain known only to those who directed the events. What is worth noting is how, through the attempt of military coup, the population has reached a compromise. The opposition to Erdogan has played a key role: it responded in a cohesive manner against the coup, but also firmly opposed to the imposition of a totalitarian regime as a political solution.

Therefore, we can hope that the very strict measures already taken against the coup leaders and their supporters will not be extended to ordinary people, in a spiral of injustice and inequality. Events of this type, in a civilised democracy where people have freedom of speech, may lead to useful results for everyone if we move together to protect the common values of our living together and we manage to create cohesion around the secular and democratic tenets.

While there are signals in this direction, there are also the conditions for an authoritarian turn and a worse scenario. In such a short time, it is difficult to understand what is behind the scenes – opinions, causes, and effects. Perhaps, it is more useful to focus on the trauma generated by the coup attempt – the hundreds of dead and thousands of injured, the fear and disturbance that surrounds our everyday lives...

How does this chaos reflect in the theatre world? Every day members of FETO are arrested and dismissed...do you think this can turn into a witch hunt, targeting leftist theatres or political opponents, just to reinforce the AKP's authority?

In highly polarised societies like ours, where there are internal enemies and conflicts, times like these can easily create a dark atmosphere, in which the search for a scapegoat turns into a witchhunt. We think we can solve the problem without going deep, with rough procedures that risk to create further conflict and suppress any opposition.

Also the other military coups in our country (like March 12th, 1960 or September 12th, 1980) or other chaotic periods have always generated backlashes against the intellectual and artistic opposition. I hope we have learned something from the old experiences – these interventions do not bring anything but pain and victimhood. We must then figure out how to avoid these dangers, which unfortunately are constant and regular.

There was already an ongoing tension between theatre workers and the government before such a strong political crisis...

I think the most important goal for theatre people in our country is to achieve institutionalisation and, therefore, stability. Theatrical art, first of all, must belong to the artists. There has never been – and probably never will be – a zone of absolute freedom, a free zone in the relationship between theatre and social events. Looking at the recent past, we can see that theatre is also made in concentration camps, in prisons, or in sewers...theatre is a means of expression and a means to tell and understand yourself.

What matters is then for this potential "omnipresence" of theatre to be cherished and pushed forward by artists themselves. When we look at Turkey, we note that this has never become a habit, that theatre is not a social necessity but an extra, a kind of "luxury". Unlike the West, where theatre traditionally occupies a more central role, in Turkey there is no strong demand for theatre as a public necessity. We need to do something to that effect, also because Turkey has a deeply rooted spectatorship culture. And, paradoxically, a chaotic situation like the one we are experiencing now represents an opportunity for growth, one where theatre could provide a "lifeline".

When experiencing difficulty in expressing themselves, viewers seek alternatives to media like newspapers. Theatre, as well as other arts, could then be the answer to this need and provide interesting, novel proposals. Of course, there is always the risk for the government to bend the theatrical and artistic world to its advantage, but this is why our ability and will of action should not be suspended today, but intensified. In today's chaos we can make a move and try to understand what our social, artistic, and institutional power is.

Are you suggesting that theatre should find some sort of collective identity? Can artistic identity match a broader political and philosophical mold? I think this was strongly implied in Turkey society of the '60s and '70s...

On closer inspection, a "political" element has always existed in traditional Turkish theatre. Our theatre of shadows had a strongly critical, humorous vein that satirised social and political facts. It was not a radical attitude, always careful not to exceed a certain limit to be tolerated by the power. Through the years, however, in the '60s, thanks to the knowledge of Brecht and Piscator, the growth of the working class and world socialism, and the acceleration of the student protests and freedom movements, theatre acquired a far more meaningful and fruitful political significance.

Since then, Turkish theatre has revolutionised itself through the contact with the European market, with changes in the attitudes towards screenwriting and directing as well as the traditional "masks"...This is not about rejecting the past, but it is rather creating a synthesis between the past and the new Western influences in our political theatre. However, this development characterised the '60s, '70s, and '80s and later weakened, so that today theatre is no longer a means of struggle.

Finally, how would you place Turkish theatre in the international context? Can you give us your outlook on the current situation?

As I said earlier, Turkish people have a strong inclination to spectatorship. However, only few have adapted to the "Westernisation" of theatre, with the result that the traditional mass of spectators went thinning into an elite. Today, only modern, educated groups like students, university teachers, and civil servants attend theatres in a "Western" way. Others like clerks, housewives, artisans, and middle and high school students do not have this propension and, on the other hand, do not find a targeted theatre offer. For example, it is difficult to see a high school student going to a play starring young, non-professional actors, or a housewife going to a show organised in her neighbourhood.

I think that, compared to Europe, our theatre can only rely on a small audience, and this is first and foremost a historical consequence of Turkish modernisation not making theatre a mainstream entertainment, educational, or cultural phenomenon. I think this is the real issue. If the audience were broader, today we would be speaking of a very different theatre. Certain styles and shapes have changed, but we still lack a lot of dynamism that can only be created by the encounter with a broader pool of viewers. So, because of economic problems related to the lack of audience, the most innovative talents in directing, writing, or scenic design move away from theatre for the better remunerated ranks of television or advertising professionals.

True, this problem does not only concern our theatre. Theatre is now worn out by cinema, television, and the Internet – all those channels that dominate today's communication. On the other hand, theatre is an archaic art with very strong roots, that allow it to constantly renew itself.

Perhaps the most important point is to try to manage theatre and all its issues – including those related to state organisations, artists, intellectuals, and citizens – with a libertarian spirit, seeing it as a source of energy, social peace, and cultural development.

Two days after this conversation, six personalities of the world of theatre – left-wing or simply opponents of the AKP party – were suspended from their positions at the Istanbul City Theatre. Then, professor Candam Badem at Tunceli University who has always declared himself a Marxist and atheist, was detained by the authorities and subsequently released on probation. We cite these episodes as evidence of the possibility that the "witch hunt" discussed in the interview was set in motion. Therefore, we condemn the suspension and the unjust detention of our colleagues!

Emre Yalçın is director of the theatre company "Beyoglu Kumpanya" and assistant professor at the Dokuz Eylül University in Izmir.