“Sins and Innocents”, by Burhan Sönmez 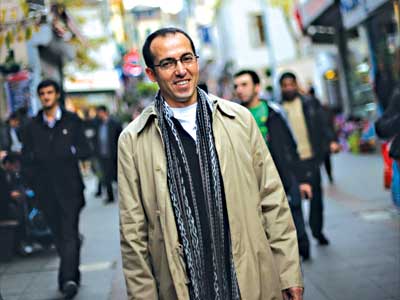 Many small stories make up a larger one which takes place between Turkey and Cambridge (UK), linking memories and exile. Interview with the Turkish writer Burhan Sönmez

Burhan Sönmez is a young Turkish writer forced for years to live in exile in Cambridge, in England, for political reasons. On his return to his homeland he played an active part in the Taksim Square protests.

His most recent novel, “Sins and Innocents”, links the pain of exile with the memories, myths and legends of his childhood spent on the plain of Haymana, south of Ankara. The first words of the novel put it like this: “My homeland was my childhood”, a phrase any refugee can identify with.

It's the story of the alter ego of the author, Brani Tawo, who, in a Cambridge bookshop, meets another exile, Feruzeh, a woman from Iran. The two, who eventually fall in love, go through their exile, cultivating their memories and enriching them with their reading and their culture.

The role of the memory is very important in your novel which, in alternating chapters, moves from the present time in Cambridge to recollections of the past, as far as three generations back.

Yes, the novel develops on three levels, all tied to memory. The first is the land of origin the two protagonists came from into exile. The second is their childhood. The third regards life and death, since the protagonist survived a certain violence.

Is that the violence which led to his insomnia?

Yes, the protagonist was attacked by the police... But this is not the issue.

A Turkish saying has it: “If someone refers too often to the words of Allah, then one should suspect he's up to no good.” Today we see the government of Erdogan is always speaking of tradition, the Ottoman Empire, the Turkish Army, and the country's great past culture, while in reality it's working in parallel to destroy the past, wiping out ancient forests, polluting old rivers, covering the land with cement, in the name of extreme industrialism. We interpret it this way: let's destroy the past to build the future.

Going back to what your grandfather recalls and the war between Greece and Turkey, your book takes a long, highly poetical look at the past, with many literary references.

Poetry is perhaps the most important element, because it is what represents the past, not the present. My country and my childhood are both tied to poetry. One realistic element I inserted into the story is a piece of graffiti I came across in an underpass in Cambridge. An anonymous hand had written: “The art of poetry...”, then someone or something had interrupted that hand. On my way to therapy, I went through that underpass every day, read that truncated line, and thought of how I might complete it. One day someone did complete it and I read: “The art of poetry is dying”. This was an important moment in my life, a symbolic moment. I began to think of this book, for which I had a great many stories and I wanted this to be a story in the story. Literary references have this purpose, to fit into the sequence without intruding.

What do England and Cambridge, where the two protagonists meet, represent? Brani Tawo asks Fenoreh: “If you were buried here, what would this earth be for you?”

The question comes from a quotation from Rupert Brooke, the poet who died and was buried in Greece, in Skyros. I think it's a question which many exiles ask themselves. Feruzeh answers that when she went back to Iran she had a rose tatooed on her, the rose of the Book of Secrets,  so as to die with that trace of Iran on her body. This is a reference to a tradition from ancient Persia, still widespread in Iran where everyone has his own Book of Secrets. That is the book we each choose as a guide to our life – in the morning you open it at random, read a phrase and this gives you an interpretation of the day to come. A bit like the way the Bible was once used in the west, opening it to read at random.

Which is your personal Book of Secrets?

(Burhan Sönmez, embarassed, blushes). I have a lot, but they are all books of poetry.

In the novel there's a sentence from Wittgenstein. The protagonist goes to the philosopher's tomb and meets a woman who had discovered her husband deceived her after she read a phrase in Tractatus Logico-Philosophicus: “That the sun will rise tomorrow is a hypothesis; and that means we do not know if it will rise”. Did you choose Wittgenstein because he is buried in Cambridge?

No, in Cambridge there are even too many tombs of famous people. This choice derives from several motives. Philosophy deals with the whole and the single parts. Historically there were those who began from the whole to arrive at the parts, and those who began with the single parts, putting them together to arrive at the whole. Wittgenstein, like Aristotle, believed that the whole was nothing other than that created by the various parts. This means the small parts when put together create the whole, and this is the meaning of my book: in it there are many small stories which, put together, make up a larger story. Wittgenstein's philosophy was useful to explain the structure of my book.

Does Cambridge represent something else, in a novel which is essentially about Turkey

Sometimes we look for the best way to tell our story. And sometimes this actually happens talking about something else. Don Quixote is the story of a great knight, an idealist and dreamer, but half the book is about Sancho Panza, a simple man, without dreams, exactly the opposite. Through Sancho Panza, the reader is better able to understand Don Quixote. I wanted to tell the stories from my past, the places of my childhood on the plain of Haymana, and I needed an opposite – Cambridge has this role.

At the end of the interview I stop to talk to Burhan Sönmez, explaining that I'm particularly interested in his book as the son of exiles from Fiume/Rijeka (Croatia), born in a refugee camp. He wishes to hear more about this story, of which he, naturally, knew nothing, asking if any Italians have remained in Istria and Fiume. Yes, a small minority, I answer. Then, in my copy of his book, he writes a dedication in Turkish. The interpreter tells me what it says – a sentence from the chapter with the significant title “Man is the refuge of man”. A hopeful answer for the fate of all exiles.