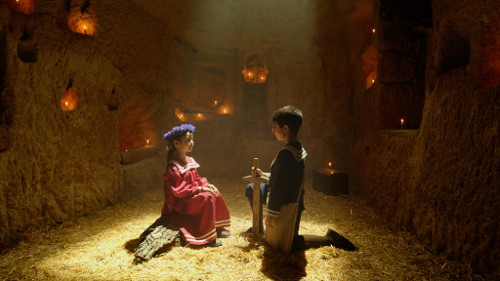 The first movie produced in Turkey on the Armenian genocide has been directed by Ela Alyamac e Aren Perdeci. Our interview

How did you start to collaborate, and when did you come up with the first idea of the film?

Ela: We had met after our first films were shown in a festival in Hungary, and Aren told me that he wanted to write a screenplay about two siblings left behind in 1915. I was intrigued because I liked the idea of telling the story from the eyes of a brother and sister.

Aren: Our journey started by writing the screenplay. We worked very hard to realize this story, to make it so that people would not be watching a film but experiencing a slice of life from a time gone by. We worked five years to make the film. We spent one year in research, one year in writing the screenplay, two years in pre-production, 30 days of shooting and one year of post production.

Ela: We are very proud of our film and what we have been able to achieve.

Could you introduce us to your film, Lost Birds?​ What is the story about?

Aren: ‘Lost Birds’ is about two siblings and a bird in a cage, their journey to find their mother and their struggle to stay together.

Ela: Our story starts on the day before Easter in 1915 in an Armenian village in Anatolia. We meet Bedo and Maryam, two siblings, with a knack for causing trouble. Even though their father is away at war, they are happy children spending their days in the woods and playing in their secret dovecote. One day the children save the life of a wounded blue bird and name him 'Bachig'. The children’s happy home life is broken when the man of the house, their grandfather, is taken away by the soldiers. Forbidden to go outside by their mother, the children run away one morning to check up on their bird. When they return, they find the house empty, just like the village which has turned into a ghost town.

Bedo and Maryam embark on a journey to search for their mother, along with their bird Bachig.

How did you find your small protagonists,​ ​Bedo and Maryam?

Aren: We auditioned 520 children from all over Turkey. We found Dila Uluca and Heros Agopyan in this search. Then for one year every Saturday we came together with the children and acted and played all the scenes together, me, Ela, Heros and Dila.

Ela: They really came to know each other and became like brother and sister. It was very sweet. The original Maryam we wrote was older than Bedo but Dila was so perfect we changed the script for her and made the character younger. She was Maryam, she didn’t need to act, she could just be. Bedo needed to be a troublemaker yet needed to have a tenderness in his soul and Heros captured that feeling perfectly.

Aren: Before the shooting we took our actors to the real locations and we practiced all the scenes with all the real sets and props and all the authentic elements in it. 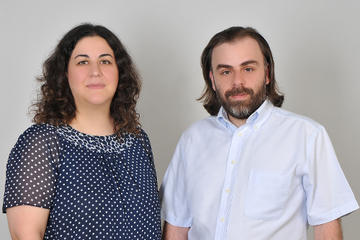 Your film is defined as an "Anato​l​ian Fairytale". How do history and fiction interact in your work?

Aren: We took a very big historical subject and we focused on two children. The audience experiences everything through their eyes, Easter, the villagers reactions to the news of their passports about to be taken away, their grandfather being taken by the soldiers as a leader of their community, them hearing all the men of the village being taken away and then coming to an empty house and an empty village.

Ela: We follow them to an orphanage life which is led by a Swiss German missionary woman, all these things and more were written according to historical facts but because we experience them through the eyes of Bedo and Maryam, who were left behind during the exile, and who have a special World of their own, we experience it all in a fary tale like atmosphere. The story of Bedo and Maryam who loose their family overnight will echo the stories of thousands of Armenian orphans. In ‘Lost Birds’ we were able to capture something real and very magical at the same time.

How did you work on reconstructing the Ottoman world in which those tragic events took place? I read you​ also​ collaborated with​ two advisers,​ Vahe Tachjian and Yetvart Tomasyan​.​

Aren: Even though we had read all the books and did our research we still felt we needed a historical advisor who would check all the little details, from the forks and knives they would be using to the buttons of the costumes, to the entire production design.

We met Vahe Tachjian, from Berlin. His expertise is on the Armenian village life during the Ottoman Empire. When we met him we showed him all our research and he was very touched and impressed and said that he would like to work with us.

We also teamed up with Yetvart Tomasyan from Istanbul who is the owner of an Armenian publishing company called Aras Publishing. He knew the ins and outs of the cultural past of Anatolia by heart. Therefore all the information came together.

Vahe Tachjian came to our set and checked everything.

During our location scouting, the more we looked at the real locations the more we found out that every remaining church, village square and Armenian house were dilapidated and impossible to use in the film. All the churches were dug by treasure hunters looking for gold. But we took pictures about everything we saw and we archived details of architectural design, texture details, doors, windows and blinds, chimneys…

Ela: We recreated the Armenian Ottoman village square, coffee shop, church, market place and shops from the pictures in our archives. Many workers worked day and night, in the snow and rain to finish everything on time. We found all the authentic textured wood from the old train tracks. Once the construction finished we started to decorate all the shops and village square and made it look like a living, breathing place.

Finding Bedo and Maryam’s house was the hardest. After looking at many houses we finally found the one. It was a house made in 1890 and we restored it to it’s former glory. From the chimney to the door, we matched it all up to the photos we had on our archive.

Another complicated task for the production design was the orphanage. We turned an empty school building from 1870s to a working orphanage.

Every detail, from the lace of the table cloths to the bed linens, from Bedo’s wooden horse to the antique camera in the picnic scene, were all gathered together from a difficult and careful selection process. All the carpets used in the film are real from the region and time of the film.

I read the film was produced with the support of the Turkish Culture Ministry's Cinema General Directorate. Considering the sensitive topic, was it difficult to receive funding?

Ela: We believe it is very important for our country that we tell this story.

Aren: The most important thing for us was the approval of the Ministry of Culture’s cinema fund, because we wanted to shoot the film with the real descendants of the Ottoman Armenians in the real Anatolian locations that the story took place.

Ela: We received a very small amount of funding which we asked for because for us the approval was more important than the money. For us, shooting this film outside of Anatolia with foreign actors was not valuable.

Aren: In the film we have seen many advantages of our actors because they have grown up with these stories and know things by heart. They did not need to act, they just made us live reality with every look and every little detail we had the privilege of capturing.

A question for Aren. Can you tell us about you Turkish Armenian background? I read you were raised up in Istanbul. Which role did your Armenian identity played in your up-bringing?

I was born and grew up in Istanbul. I went to a Turkish, then French school in Istanbul. So I had a Turkish and French education. At home I was raised and learned the traditions from my grandmother, mother and father. The topic of 1915 was never confronted in my home, and it was kept a secret. After we decided to write this screenplay, the first story my mother told me was the sad story of Armenak and how her family moved to Istanbul because they had to give up their beautiful house to the military to be used as headquarters in Konya. Because of this reason, they had survived.

Having a film about the Armenian Genocide released in Turkey in the year of the centenary represents a major sign for peace. What are your hopes for the future?

Aren: We want people to see ‘Lost Birds’ in the 100th anniversary of 1915. This was the first time a film was made about this human tragedy in Turkey. Our hope is that the film will be also shown around the World.

Ela: This film was made possible with the help of many Armenians living in Turkey, all descendants of orphans of 1915. We believe that ‘Lost Birds’ will help people to share and discuss their own stories after they watch the film, and build a bridge between people who once lived on this land in harmony.

Aren: This film can not change the fact that this tragedy took place, but it can help us to better understand each other and to look at the future with hope.