Slovenia: young environmentalists and the pandemic, the unexpected consequences 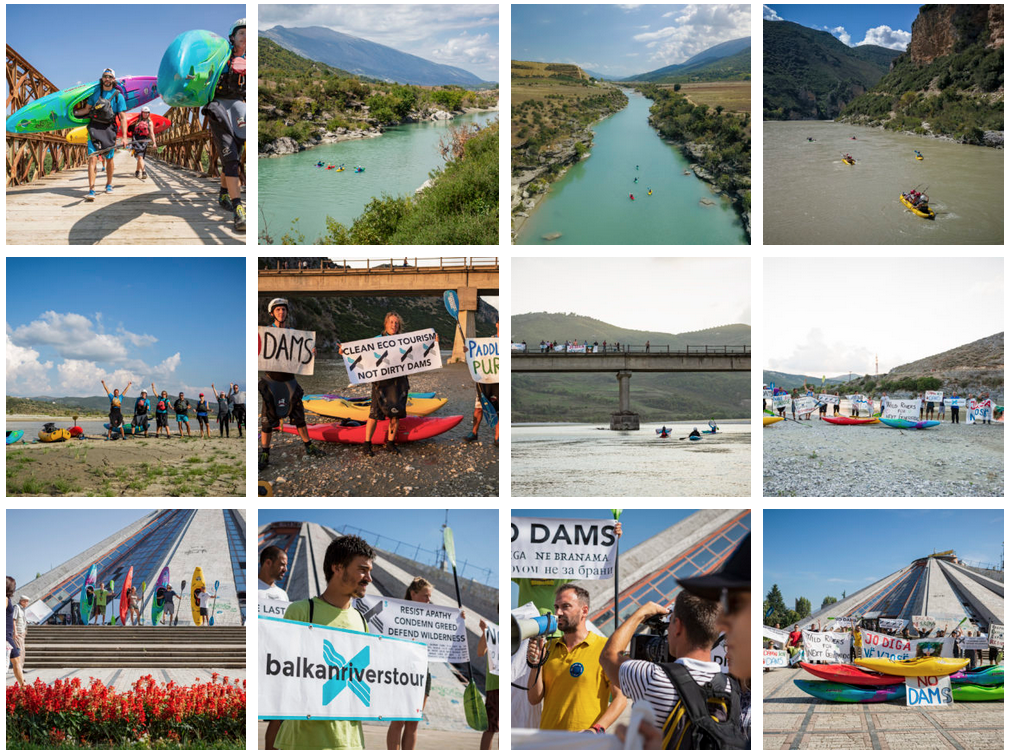 A page of the portal Balkan River Defence

In Slovenia, as in the rest of the world, Covid-19 has upset the dynamics of youth activism, including the environmental one, which was in full swing before the pandemic. Despite the assembly ban, the closed universities, and the economic crisis, environmentalists have achieved a historic referendum victory with another unexpected consequence: to take root in the rural country, traditionally impervious to mobilisations

Water laps calmly over the gardens and orchards of Kostanjevica, the tiny town on an island in the Krka River. On the bridge, a middle-aged lady tells young environmental activists Nicoleta Nour and Jakob Stanic about the village's close, insidious coexistence with the river: boat trips, more and more insidious and frequent floods, and safety projects that risk filling a very green landscape, rich in history, with concrete.

The young activists are wearing headphones and a professional recorder. They are touring the districts of Slovenia in search of places and people emblematic of the country's relationship with its rivers, with the idea of creating a podcast and raising awareness on environmental issues.

It seems absurd, but a project like this is, in a sense, an unexpected consequence of Covid-19.

Two years of pandemic have upset the lives of young activists and students, severely limiting the possibility of traditional action, in the universities and in the squares.

Yet, unlike in many other countries, environmental activism has been able, at least in part, to reinvent itself and find other ways to achieve important results, despite contradictions and difficulties.

Two bolts from the blue

On the eve of the pandemic, environmental and youth movements were thriving. Fridays for Future had recently landed in the country, involving a considerable slice of very young people. At the Global Climate Strike on September 20, 2019, there had been 14 simultaneous demonstrations across the country. An explicit contribution to the success of the initiatives came by youth and university groups such as Mladi za podnebno pravičnost (Youth for climate justice, the Slovenian branch of the movement born from the strikes of Greta Thunberg) and the vast galaxy of NGOs linked to local or specific issues such as the protection of waterways.

Resistance to the uncontrolled boom of hydroelectricity is currently the most organised environmental movement in the Western Balkans, of which associations such as Slovenian Balkan River Defence are an integral part, capable of producing spectacular and often creative initiatives, in synergy with a part of the academic world, both Slovenian and international.

Then came Covid-19, and with lockdowns, bans on gathering, and the closure of schools and universities, the initiatives suddenly ceased. Not only did public events become impossible, but it was hard to keep environmental issues in the public eye at a time dominated by much more urgent concerns and fears.

From the activists' point of view, March 2020 had also brought another calamity: the rise to power of right-wing leader Janez Jansa, a highly polarising character, accused right from the start of taking advantage of the emergency to consolidate his power at the expense of his opponents.

Indeed, in the middle of the pandemic, Jansa and his Environment Minister Andrej Vizjak found the time to pass two controversial regulations that directly affected the world of activism and environmentalists.

The first, passed in May 2020 and still in force, was officially intended to facilitate economic recovery, but in fact it seemed specifically designed to bury environmental NGOs. To participate in the debate required by law before building new potentially impactful works, the associations would have had to comply with very strict criteria: at least 50 active members, three full-time employees, and a budget exceeding 10,000 Euros.

In other words, almost the entire backbone of Slovenian environmental activism, made up above all of autonomous groups and small associations, was cut off.

Exactly one year later, in the midst of a resurgence of the epidemic that saw Slovenia among the most affected countries in the world, the parliament found time to legislate on a controversial change in the water legislation, in force since 2002. The rule, strongly wanted by Minister of the Environment Andrej Vizjak, dangerously extended the types of industrial activities allowed in the vicinity of waterways and made it easier to build, even on the banks of rivers, lakes, and on the coast.

From the Internet to bicycles

Both regulations sparked protests from environmentalists, whose counterattack initiatives were however severely limited. Fortunately, if we can say so, the environment was not the only issue that outraged a significant part of the Slovenes.

When the government was accused of illegally interfering with the purchase of masks and respirators, thousands chose to take to the streets. Protesters circumvented the assembly ban by parading by bicycle rather than on foot. The initiative was successful and the first ride on May 2, 2020 was followed by others for many weeks, on Friday.

Protesters objected to the government’s management of the pandemic, especially for the control of the media, which had become more pressing since the beginning of the emergency, and for the laws against environmental NGOs.

The other fronts of environmental youth movements, meanwhile, were organising to continue their online activities, including climate strikes in which participants shared protest slogans on social networks. On the one hand, the number of participants inevitably decreased and so did their involvement and ability to involve new people. On the other hand, however, webinars, study initiatives, and international exchanges proliferated that were previously unthinkable.

Victory in the referendum

The mobilisation against the changes to the water law, starting in spring 2021, was the real leap in quality for the environmental movements. Water has always been a deeply felt issue, sometimes almost a matter of identity, in the country that included its protection in the constitution in 2016. Despite the difficult situation, many immediately found the new rule unacceptable.

The approval with a shortened procedure, according to many at the limit of legality, did the rest.

Environmental NGOs launched the collection of signatures for an abrogative referendum, supported by opposition parties and by actors normally far from activism, such as scouts and fishermen. Endorsements also came from the universities and, albeit not explicitly, even from the President of the Republic Pahor.

Although most of the restrictions had been relaxed in May and June, the rules on gatherings and rallies remained very strict.

The government made matters worse when, noting that the number of signatures to call for the consultation had been reached, chose to hold the vote on Sunday, July 11, one of the first days of open borders in which Slovenes would be able to enjoy a day off.

In a country where abstention had been skyrocketing in recent years, reaching the quorum seemed very difficult. In fact, it was largely overcome and environmentalists won with an overwhelming majority that still marks the worst defeat for Jansa's government.

Of the approximately 75,000 Slovenian students, over 40,000 live or study in Ljubljana. Maribor is home to 15,000 and the rest of the country shares the rest.

With the partial exception of Fridays for Future, which involves high school students and is more distributed in the country, virtually all youth activism is concentrated in the capital: a major limitation for those who put the environment and territory at the centre of their actions.

“You are in Ljubljana, you feel like an intellectual, you have knowledge, perspectives”, says Nicoleta after a day of recordings and interviews. “A lot of energy spent in mobilisations. Finally, you write a document on river protection, climate justice, and send it to the government. And it all ends there”.

With the faculties closed, however, thousands of young people returned home, often in small or very small towns. Those who commuted began to spend time with fellow citizens of every generation, with people of all kinds, discovering much more local problems and issues.

“In Ljubljana you can't really know what's going on in Brezice or Nova Gorica”, explains Nicoleta, who studies microbiology in the capital. "But now we have had the opportunity to really understand what is happening on a territorial scale, to talk and discuss with neighbours, normal people, no longer intellectuals or aspiring ones".

The two activist-authors are convinced that this forced homecoming has convinced even those who do not normally have much regard for the environment of the importance of taking a walk in nature and protecting it. A "fermentation" that was previously present only in large urban centres and which could have played a role, albeit partial, in the historic victory in the referendum.

Autumn against the green pass

The glorious referendum summer, however, has given way to an autumn where the only theme capable of filling the squares, with related clashes, seems to be the green pass.
In a country where the government was accused right away, and not without reason, of taking advantage of the pandemic to consolidate power, it is not surprising that a large part of the population is distrustful of travel bans and vaccination policies. The distrust of measures to combat the virus is also shared by many of the country’s young activists, unlike their Western European peers and despite their proximity to the scientific environment.

The current protests against the restrictions, however, do not involve environmental movements as they continue their battles. On September 24, Fridays for Future restarted with some success, with demonstrations in the capital and in five other cities. Slowly, environmentalists hope, the environmental crisis – much more lasting than Covid's – will regain the centrality it deserves.