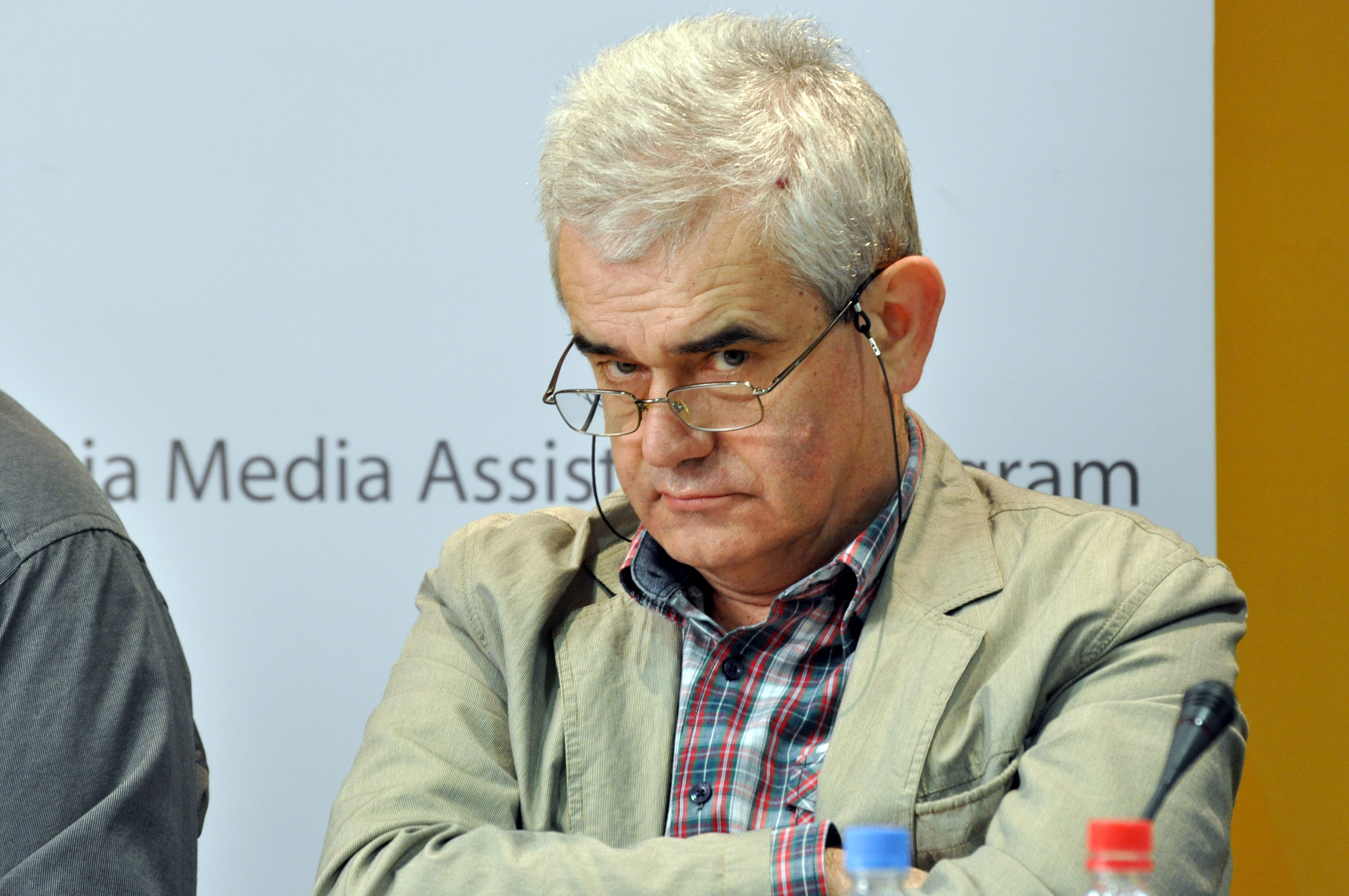 Yet another worrying case of threats and pressure on Serbian media not aligned with power. This time, targets include our Belgrade correspondent Dragan Janjić

Last week, during a television broadcast, Suzana Vasiljević – Serbian president Aleksandar Vučić's information advisor – showed a list of 17 media outlets that, according to her words, attack the Serbian government. This has raised suspicions that the government is drawing up lists of "disliked", i.e. independent, outlets.

In Serbia there are over 1,000 regularly registered newspapers, so those 17 cited by Vasiljević represent only 2% of all outlets in the country – yet, however few, they obviously bother the establishment. Suzana Vasiljević's gesture and other similar behaviours are seen by the media that are not under government control – and most Serbian journalist associations – as a threat and an attempt to influence their editorial policy.

The government's motives emerged clearly during the protests held two weeks ago in Belgrade outside the headquarters of the Radiotelevision of Serbia (RTS) and outside the palace of the presidency of the Republic.

Power representatives reacted to the demonstrations by launching a media campaign to brand opposition leaders as "violent" and "fascist", accusing them of breaking into the RTS headquarters and damaging them. The protesters did break into the RTS building, but they did not destroy anything and there were no clashes with the police or serious injuries.

Since two television stations, N1 and Šabac – together with most independent information portals – broadcast the protests live, the smear campaign against opposition leaders has not had the desired effect, therefore government officials have now been targeting N1 and other independent outlets that report on the protests, accusing them of inciting violence and acting against Serbia.

This suggests that the government's intention is to further increase the tension in Serbian society, in order to marginalise all dissenting voices. It will be able to do this only by controlling the content of the information that reaches the public opinion and radically reducing the space for public debate, the possibility of asking questions and discussing certain topics. However, without full media control, it will be very difficult (and probably impossible) for the government to achieve this goal.

The case of the Beta agency

The government has developed a complex system to exert pressure on the media, with the participation of various subjects, ranging from obscure web portals to the mainstream media and the highest state officials. In this system, everyone does their part. This emerged clearly in the case of the threats to the Beta news agency.

For over a year now Dragan Janjić, the managing editor of the agency, has been repeatedly contacted by a man who claims that the agency follows a bad editorial policy and could therefore become the target of acts of violence by citizens. “This is Bogoljub Pješčić, I have known him for years now. He was the owner of the Internet provider Absolut OK. For several years, this company provided Internet services to the Beta agency. This is how we met. His calls and messages were usually presented as 'benevolent warnings', but this does not make them any less serious", explains Janjić.

Last week, Janjić received a message from Pješčić saying: "If there are riots on Saturday, I think Beta will be burned down". Saturday is the day when anti-government demonstrations have been held in Belgrade for months now. Immediately after receiving the message, Janjić called a meeting of the Beta editorial board, that decided to report the incident to the police.

The police acted professionally, correctly, and effectively. They detained and questioned the person who threatened Janjić, and filed a criminal complaint with the competent prosecutor.

Although the police did not publicly disclose his identity, Bogoljub Pješčić published on social networks the report of interrogation, during which he declared he knew Janjić. The Serbian journalists' association (UNS) also published Pješčić's statement on its website. Suzana Vasiljević reacted by commenting: "And then they talk about threats".

The attempt to dismiss the threats continued on Pink TV. During a broadcast aired last Saturday, prime minister Ana Brnabić commented on the matter, insisting that Janjić and Pješčić know each other. Neither Brnabić nor Vasiljević have tried to explain why a threat received from a person known by the victim automatically becomes harmless and criminally irrelevant.

Put simply, this is an organised attempt to manipulate public opinion in order to overshadow the fact that independent media are threatened. Pješčić told the police that he had only tried to amicably warn Janjić, while in a statement released to UNS he claimed he sent Janjić the controversial message because he does not like what the Beta editor thinks of protesters breaking into the RTS headquarters.

Thus, Pješčić tried to influence the editorial policy of a media outlet by putting pressure on its editor. The manner in which some senior state officials have reacted suggests a systematic, organised attempt to condition the media's editorial policy.

Bogoljub Pješčić has also sent several messages to N1, criticising its editorial policy. He introduced himself as an official of the US secret services, stating, among other things, that Jugoslav Ćosić, director of N1 Serbia, will be banned from entering the United States. Ćosić filed a complaint against Pješčić, while the US embassy in Belgrade stated Pješčić "does not work for the US government", recalling that "pretending to be an official or employee of US institutions is a serious offence and a violation of US laws”.

Questioned in the context of the investigation resulting from the complaint presented by Ćosić, Pješčić said he has known N1's editor for years. However, Ćosić stated that he has never met Pješčić and does not know him personally.

According to the UNS report, 8 years ago Pješčić sold the company Absolut OK to an investment fund linked to Dragan Šolak, director of cable operator SBB and chairman of the board of the company United Group, owner of N1. It is telling that some pro-government media continue to claim that Ćosić and Pješčić are business partners and friends, thus overshadowing the issue of threats and pressures against the media.

A person who introduced himself as Bogoljub Pješčić also threatened a journalist from the Danas newspaper, contacting her by phone after the newspaper published a statement by the Ministry of the Interior, saying that a person was questioned about the threats received by Ćosić and Janjić. "If in ten minutes you do not remove the news from the site, I will report you and sue you for one million dollars. I am a member of Donald Trump's administration and a US citizen. You can't do anything to me, and I'll be glad to take a million from Soros' employees", the voice on the phone told the Danas reporter.

On the same day, this person also called Danas editor-in-chief Dragoljub Draža Petrović. "He said we posted the news that he was questioned [by the police] about the threats, and that he will report us for it. When I told him that his name did not appear in the article in question, he replied that through his acquaintances in the US administration he will try to present us in the worst possible light", explains Petrović. Pješčić's lawyer denied this account of the facts.

The whole affair concerning the threats to Beta and N1 was commented on a Facebook page titled "Srbija naša zemlja" [Serbia our country]. The contents posted on this page are very similar to those of the intimidating messages received by Ćosić and Janjić, and this suggests that behind this Facebook profile there is Bogoljub Pješčić.

Asked by the UNS, Pješčić neither confirmed nor denied this hypothesis. "Why are you interested in this? Whether I'm tied to this Facebook page or not, it's my business", said Pješčić. He also refused to answer the question about whether he contributes in any way to the creation of the contents published on this page.

The page states, among other things, that Soros and "the former Clinton administration" would be behind N1, and often publishes intimidating messages addressed to Nedim Sejdinović, former president of the independent association of journalists of Vojvodina (NDNV), branded as "Muslim extremist and Serb-hater". Sejdinović filed a complaint against this Facebook account, but the case remains pending.

The "Serbia our country" page has no colophon, and texts are not signed. Meanwhile, the Balkan Investigative Reporting Network (BIRN) has published an investigation into the potential links between this Facebook account and the Breitbart News portal, founded by Andrew Breitbart and Steve Bannon, former advisor to Donald Trump.

According to the registry of Serbian Internet domains, breitbart.rs was registered on February 27th, 2019. However, this site does not feature any content and the person who registered the domain is unknown. After Bogoljub Pješčić was heard by the police, yet another sponsored post was published stating that page administrators are denied the right to work, guaranteed by the constitution, and are persecuted and threatened. "Serbia, help us", reads the page, that has about 100,000 followers.