The curves of the Georgian alphabet seduce UNESCO 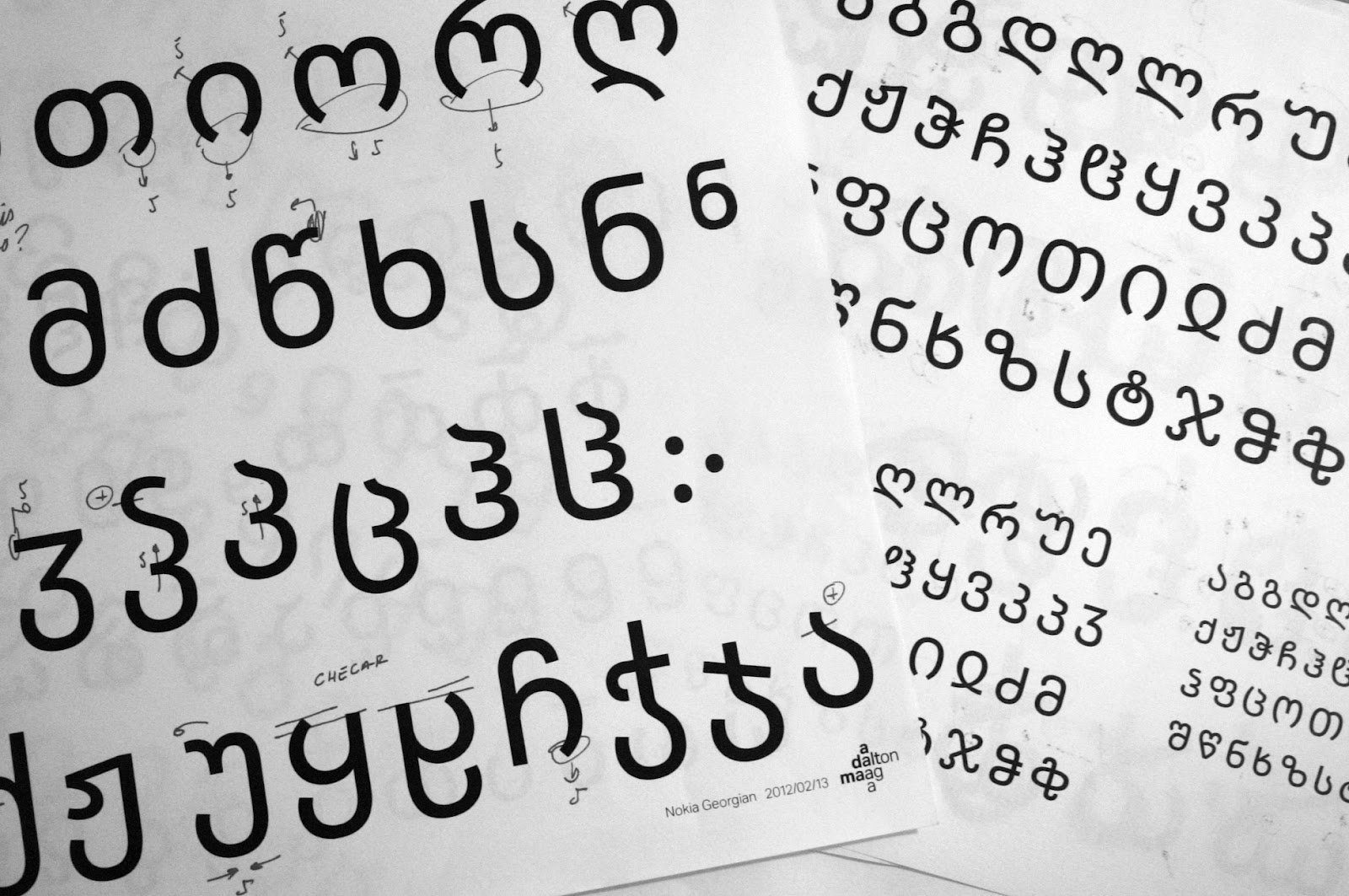 After evolving in parallel for centuries, thanks to UNESCO, the three Georgian alphabets became intangible cultural heritage of humanity. A living and charming heritage, but one to be protected

The curves of the Georgian alphabet embrace the traveller landing at Tbilisi airport in a welcome that is as soft as its letters. The convoluted traits have intrigued scholars for centuries and seduced the United Nations Educational, Scientific, and Cultural Organization (UNESCO), that last December 1st included the Georgian alphabet – or rather, the three alphabets – in the list of intangible cultural heritage of humanity . The decision recognises the value of "three alphabets [that] live together in harmony and define the Georgian language".

There are three systems of writing – the mkhedruli, used in daily life, and the older asomtavruli and nushkhuri, used especially for the writings in the Orthodox Church.

"The three systems have evolved in parallel, in a slow mutation lasting centuries, becoming three separate entities", explains Thomas Wier, American linguist and professor at the Free University of Tbilisi. "To recognize them, you need to study them one by one, you cannot just guess".

These three alphabets are also used by some other languages in the South Caucasus. It is the case of language systems that do not have their own literary tradition like the mangrelio, spoken in western Georgia, or the svano, common in the Svaneti, a remote mountainous region in the north of the country.

The three distinct systems have withstood the erosion of time and today fulfill different social functions which, according to UNESCO, reflect the cultural diversity and identity of the country. Moreover, Georgia sits in the heart of the Caucasus, a real linguistic Babel in terms of density of languages and dialects in front of a relatively limited territory.

"There are about 70 languages in the Caucasus, between north and south, but this is a conservative estimate that takes into account conflicting opinions among linguists on what is a language and a what is a dialect", says Wier. "The North Caucasus is a kaleidoscope where geography has shaped a complex linguistic map. In the South, Georgia is the most diverse state with about 13 languages, while Armenia is the most homogeneous with three".

The Georgian case of multiple alphabets is not unique (Japanese, for example, provides another instance of such a situation), but remains rare. Linguistics is not an exact science, opinions divide experts and the study of the alphabets is one example – beginning with a question: what is an alphabet? According to the official definition, an alphabet is a writing system in which symbols or letters correspond to all the sounds of a language. Easy to say, harder to do.

"Let's take Hebrew and Arabic. They have no written vowels, but vocal sounds are present in the spoken language, so, if we strictly apply the definition, neither of them can be considered an alphabet", says Wier. "Other linguists, including myself, have a broader view and include both in the ranks of the alphabets. In a wider perspective, there are about 40 alphabets in the world, if you faithfully stick to the definition we go down to about twenty".

Georgian has phonemic orthography – i.e. one character, one sound – and does not distinguish between uppercase and lowercase. But the simplicity stops there – the curved lines fascinate many, but the complex grammar and convoluted syntax are not for everyone.

The mkhedruli and its 33 letters permeate everyday life. It is taught in school, it is the alphabet of books and documents. The other two, older, alphabets are taught at a basic level in some schools. Their interest for scholars outside the ecclesial circle lies in the fact that they are needed to consult historical documents.

Questions tortuous as its letters envelops the alphabet's exact genesis. According to historians, in the 3rd century BC Pharnavaz I, King of Kartli (or Caucasian Iberia, as the ancient kingdom corresponding to current Georgia is named) created asomtavruli after the Greek model. The first known, intact example of asomtavruli dates back to 430 A.D. and was discovered in 1959 on a mosaic of the Bir el Qutt church in Bethlehem.

An inscription on the apse of the Sioni church in Bolnisi, in the southeast of the country, is the oldest example on Georgian soil.

An inscription on the apse of the Sioni church in Bolnisi (photo M. Ellena)

"The first two alphabets reflect a specific function, to be carved into the rock, and the shape of the letters reflects this need", says Wier. "The signs are sharp, with many right angles that could be easily engraved. The mkhedruli used today corresponds to italics, and took off to answer, again, a practical need – to write on paper." The advent of trade required being able to write orders more quickly.

The asomtavruli remained popular until the 9th century, when the softer lines of the nuskhuri took over until the 11th century. The mkhedruli, that had developed in parallel, became predominant in the 13th century. Less radical changes followed with additions and deletions of letters. The latest reform dates back to 1879, when Ilia Chavchavadze, prince, poet and writer later declared a saint, eliminated five obsolete letters.

From the stone to the web

Georgian does not belong to any language family, and its letters do not resemble, even remotely, their Cyrillic or Greek ancestors.

Surprising as it may be, Italy played a part in the spread of this complex, circumscribed language. In May 1626, the Vatican decided to open a Theatine fathers mission in Georgia. Three years later, Italian Father Stefano Paolini, a Catholic, and Georgian Nicephoros Irbachi, Orthodox Christian, published the first Georgian-language printed book. The "Georgian and Italian Dictionary" (Dittionario giorgiano e italiano) was published by the Sacra Congregatio de Propaganda Fide. "The Georgian grammar" saw the light in Rome thanks to Theatine missionary Francesco Maria Maggio. It was 1643.

Georgian enjoyed widespread respect at the court of the tsars, and was not undermined by Russian, not even under the Russian-speaking Soviet Union.

"Georgia, Armenia, and the Baltic countries managed to keep their alphabets, in both education and the bureaucracy", explains Wier. "Russian-language documents were mostly aimed at readers outside the borders of the republic or the Russian-speaking population, about 8% of the total".

Today, Georgia counts about 3.7 million inhabitants – a quick calculation shows how the language and alphabets are used by approximately 0.06% of the world population. The risk of being swallowed is not unlikely. Despite Georgian being one of the linguistic options on computers, tablets, and smart phones, the tendency has spread to use the Latin alphabet, partly because of the very limited range of stylistic features available – a bit like only having Arial or Times New Roman when writing using the Latin alphabet.

A solution to fill the gap has been found not by a calligrapher or a linguist, but an industrial designer. In 2015 Zviad Tsikolia, 45 – a well-known, award-winning designer who has worked extensively in Europe, together with the first bank in the country, TBC Bank, launched #WriteinGeorgian, asking volunteers to create new styles for alphabetic characters. The response was an avalanche of characters – 160 fonts registered in five weeks.

"We have one of the most elegant and beautiful alphabets in the world, a treasure that needs to be not only protected, but also updated", explains Tsikolia, who can also boast a prototype for Bugatti in his portfolio. "The world is becoming increasingly digital, and our characters must be able to evolve and adapt to a reality that is no longer just on paper".