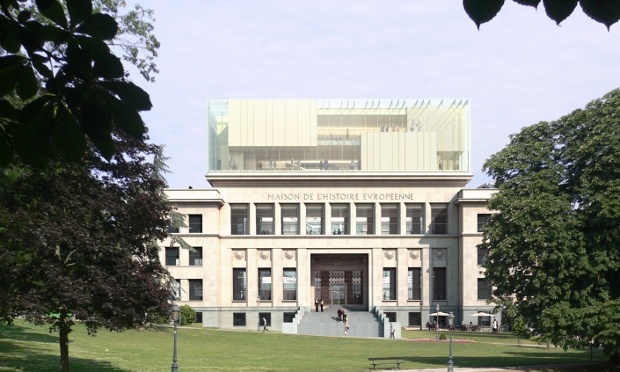 A museum that seeks to project a transnational vision of European history. An ambitious project that has not escaped controversy and criticism. An interview with director Taja Vovk van Gaal

In May 2017, 60th anniversary of the signing of the Treaty of Rome, the House of European History will be opened in Brussels. The museum, sponsored by the European Parliament, will have the ambitious task of narrating the history of the continent and its political integration. In recent years the project has stirred some debate, especially as regards the need for and presentation of a "European past". Among the many issues on the table, it will be interesting to see what spaces will be devoted to South East Europe and the history of a region still partly excluded from the EU integration policy. In particular, dealing with a conflict-ridden century such as the 20th century, it will be important to understand what meaning will be assigned to the Yugoslav wars of dissolution.

The House of European History is the main attempt at history and memory politics promoted by European institutions. To accommodate its exhibitions in Brussels, the historic Eastman building, just steps from the Parliament, was specially renovated. The project was launched in 2007 as part of a broader policy aimed at consolidating the EU's legitimacy by strengthening cultural integration. The scope of this operation shows that, over the last decade, European institutions have sought to overcome their traditionally cautious approach on these issues.

The project, however, did not fail to stir some controversy, first of all about the high costs in times of economic crisis. Internal differences emerged also within the European Parliament, which also houses groups opposed to any kind of cultural integration policy. More specific criticism initially concerned the top-down nature of the initiative and the choice to overcome national narratives with what was perceived as equally questionable cultural engineering. In recent years, however, the project has undergone significant revision, favouring greater involvement of academics and museum experts, scaling down the political agenda.

In times of rising nationalism, the creation of a place for discussion and reflection on European transnational history is viewed by proponents as an opportunity, but the institution will need to be able to compare and include differences and complexities. How the museum will deal with South East Europe will be an indication – will cultural prejudice, Balkanism, or difficulties in the relationship with the region's Islamic tradition have an impact? If the Union's slogan "united in diversity" sums up the spirit of the European project, the narrative produced by the House of European History will be tasked with explaining concretely what histories and cultures are entitled to be part of such horizon.

The inclusion in the exhibition of the Yugoslav dissolution wars, involving member countries and countries undergoing different phases of the integration process, appears particularly complex. The conflicts of the nineties also represent a somewhat problematic moment in a representation of the past sometimes reduced to a "peace narrative" after the violence of World War II, culminating in the Nobel Peace Prize to the European Union in 2012. The Yugoslav crisis, presented at the time as "the hour of Europe", revealed the limits of European policy, unable to prevent or resolve the conflict.

To date, the information leaked on the actual content of the exhibition of the House of European History are limited to few policy papers and a brochure. Pending the imminent opening, we asked Taja Vovk van Gaal – Slovenian historian and curator leading the project since 2011 – to clarify some issues. While offering an interesting picture, the director preferred not to disclose some elements. It will take another few weeks, until the opening of May 6th, to get a more complete picture of the representation of the past that the House of European History will offer its visitors.

After long preparation, the House of European History (HEH) will open its doors to the public in the year of the 60th anniversary of the Treaty of Rome. What are the mission and the meaning of an institution that tells the history of Europe, today?

Which are the main characteristics of the permanent exhibition at the HEH? How much space is going to be devoted to the general history of the continent and how much to the integration process started in the 1950's?

The permanent exhibition focuses on the main phenomena and processes which have shaped contemporary Europe throughout history, and emphasises the diversity of experiences, awareness, and interpretation related to these developments. It does not portray the individual histories of Europe’s states and regions – instead, it focuses on European phenomena.

The Academic Project Team chose three criteria for content to be selected in the exhibitions – events or ideas that have their origins in Europe, that have expanded across Europe, and that remain relevant today. Based on these criteria, the project team distilled six themes with a large number of topics and sub-topics. Thus, the permanent exhibition frequently goes beyond the outer borders of the European Union.

European history can be complex, diverse, and fragmented, but it has a large number of wide-ranging commonalities and widely shared experiences. Displaying some of these is the purpose of the permanent exhibition. Beginning with the ancient myth of “Europa and the Bull” and its changing interpretations, the exhibition highlights key factors of Europe’s heritage, which have shaped it deeply, with effects that are still visible today.

The European integration process is presented through 15 important milestones and covers approximately half of the exhibition space devoted to this period. The post-WW2 period is presented on three out of five floors of the permanent exhibition areas.

The only similar institution promoted by European institutions, the Parlamentarium, has been accused of providing an excessively teleological representation of the European Union's history. Is the HEH going to take into consideration also the difficulties and contradictions of the integration process? Is it going to pay attention to expressions of opposition and disagreement as well?

Our Conceptual Basis , a document prepared by a team of experts in 2008, clearly states that "academic independence and the objective portrayal of history have top priority". The Academic Project Team for the HEH took this as the basis of its work, meaning that the narrative of the exhibition is constructed in a way that integrates contradictions, difficulties, and oppositions as well as disagreements in the representation of the history of the European Integration process.

The EU Eastern Enlargement in 2004 favoured the reopening of the discussion on "European memory". How is the HEH’s work going to include the different experiences of the Eastern and Western parts of the continent during the 20th century?

One of the fundamental elements of the narrative presented in the HEH is a concept of memory that refers to a definition by Adolf Muschg – common memory as something that binds Europe together and that divides it. The ambition of the authors of the permanent exhibition was to establish this museum as a "reservoir of European memory", containing experiences and interpretations in all their diversity, contrasts, and contradictions.

Some countries of South East Europe have joined the European Union, while several others are still in Europe’s “waiting room”. Could you reveal some details about the attention that will be devoted to the history of this part of the continent by the HEH’s permanent exhibition?

The HEH permanent exhibition is not limited to historical phenomena limited to the 28 EU member states. Our presentation also includes the history of Europe beyond EU borders.

The Yugoslav dissolution wars represent a challenge to the narrative on recent European past as a history of peace and tolerance after the violence of World War II. Is the permanent exhibition going to present also these conflicts that involved some EU member states, potential candidate states, and candidate states, but also questioned European Community policy and shocked European public opinion?

The recent past will be presented in the same way as other topics of the permanent exhibition, through multi-perspectivity and a critical approach.