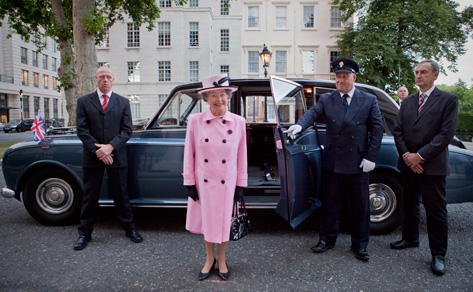 From the film "Mission London"

For the Western viewer, a well-acted comedy; for the Bulgarian audience, crazy laughs as well as disillusionment for the broken dreams of transition and an elite that turned out to be dishonest and useless. Now in cinemas, Mission London, from Alek Popov's best-seller

"Misija London" (Mission London) has been screened in Bulgarian cinemas since 16 April. The comedy is based on Alek Popov’s novel of the same title, a best seller in contemporary Bulgarian literature. Although the author repeatedly denied any connection between characters and real persons, the plot includes faces and names that apparently resemble characters in the Bulgarian embassy in London when the author worked there.

The director, Dimitar Mitovski, skilfully translates onto the screen the rich comic scenes in Popov's novel. The Bulgarian president's wife, Devorina Selyanova, promotes diplomat Varadin to ambassador in the UK. He has the special mission in London to organise a charity concert for Bulgarian orphans and ensure the presence of Queen Elizabeth II. Devorina attempts to gain entry into the world elite, no matter how much money it takes – taxpayers' money, of course.

Varadin contacts the “Famous Connections” agency that promises to guarantee the presence of the queen and other VIPs at the event. Very soon, it becomes very clear that the agency uses look-alikes and deceives customers. During the concert at the Bulgarian embassy, the fake queen spoils everything by embarking in a passionate defence of brown bears.

When embassy diplomats see a BBC report showing the real queen visiting an African country, they decide that she must be a look-alike and the real queen was at the charity concert. “Look”, they tell each other in awe, “The queen has a look-alike, just like Brezhnev, just like Yeltsin!”. At the end of the film, Devorina comes to the same conclusion and states: “Even “Tato” (nickname for Communist dictator Todor Zhivkov, who ruled Bulgaria for 33 years) had a look-alike!”.

Zhivkov's ghost and his provincial soul wander through the embassy, a true “living museum” of Communist times. Diplomats established a sort of duty-free zone for small and big frauds such as smuggling rakija and Bulgarian cigarettes into the British market. Promoted because of personal connections, they all tremble at the thought of possibly losing their privileges. The most shameless character is a cook, Banicharov, perfectly played by Lyubomir Neikov. For a small amount of money, Banicharov gets involved in a shady business scheme with a Russian mobster (played by Pavel Chernev, former MP in the Bulgarian nationalist party Ataka).

The mobster steals nine ducks from Richmond Park, which Banicharov butchers and puts into the embassy freezer. However, the ducks have chips and are tracked by the London police. The two throw the chips into the lake – all but one. The cook manages to sell Varadin the ducks, which end up on the menu for the dinner with the fake queen. Devorina ingests the last chip and is then followed by the police until an agent of British secret services (MI-6) saves her from further consequences for the sake of political etiquette. The West needs support from Bulgarian leaders and thus wants to avoid displaying their predatory nature.

Many “British” characters in the film resemble third-rank illusionists, worthy counterparts for the exotic crowd in the Bulgarian embassy. Most of them are swindlers, like Lord Dean Carver, who introduces Varadin to the shabby “Famous Connections” agency and its director Sibling, played by Alan Ford – also known for his role in Guy Ritchie's film Snatch. Carver remembers, with consuming nostalgia, the times when, as a young, promising politician, he was welcomed in Bulgaria like a king. “What times! It wasn't all that bad!” he exclaims, recalling the hunting trips with the communist nomenclature...Towards the end of the film, a major tries to unload into the yard of the Bulgarian embassy a whole truck of humanitarian aids consisting of chamber pots – some even operable.

"Misija London" outstandingly describes many elements and complexes of Bulgarian collective psychology. In the film, Bulgarians living in London get drunk in the Russian restaurant “Borsch & Sorrow”, decorated with matryoshka dolls. In the book, Popov describes walking down the restaurant stairs as a descent to hell, or rather the “Bulgarian section” of hell, where customers “seem to boil in the same pot”.

Popov describes the film as a comedy that also touches deeper themes such as small nations' inferiority complex and the way different cultures and worlds communicate and evaluate each other. A striking example of psychological complexes is the first lady, Devorina: constantly adorned by peculiar, gaudy hats, she busily organises concerts to honour Bulgaria's glorious, ancient history – with consistently pathetic results.

In a way, "Misija London" is a prophetic story. Written long before 2008, when an art installation represented Bulgaria as a squat toilet; the story begins with the mayor of a Bulgarian village, Provadija, advertising in London a toilet seat “created by ancient Bulgarians 600 years before it became known to other Europeans.”

In the novel, the fake queen shows an interest for the traditional Bulgarian peasant shoes (tsarvuli) from an exhibit at the embassy, tries them on, and leaves in them. Everyone is pleasantly surprised, except the curator of the exhibit, who wonders, annoyed, “Who is going to pay now?”, adding “They wouldn't even pay for a pair of shoes, may they be damned”. Unfortunately, the scene was not included in the film.

For the Western viewer, "Misija London" is a well-acted comedy, with many unexpected developments and surreal situations, supported by a quality soundtrack. However, for the Bulgarian audience, crazy laughs mix with disillusionment about the broken dreams of transition as well as an elite that turned out to be as fake as a look-alike queen.