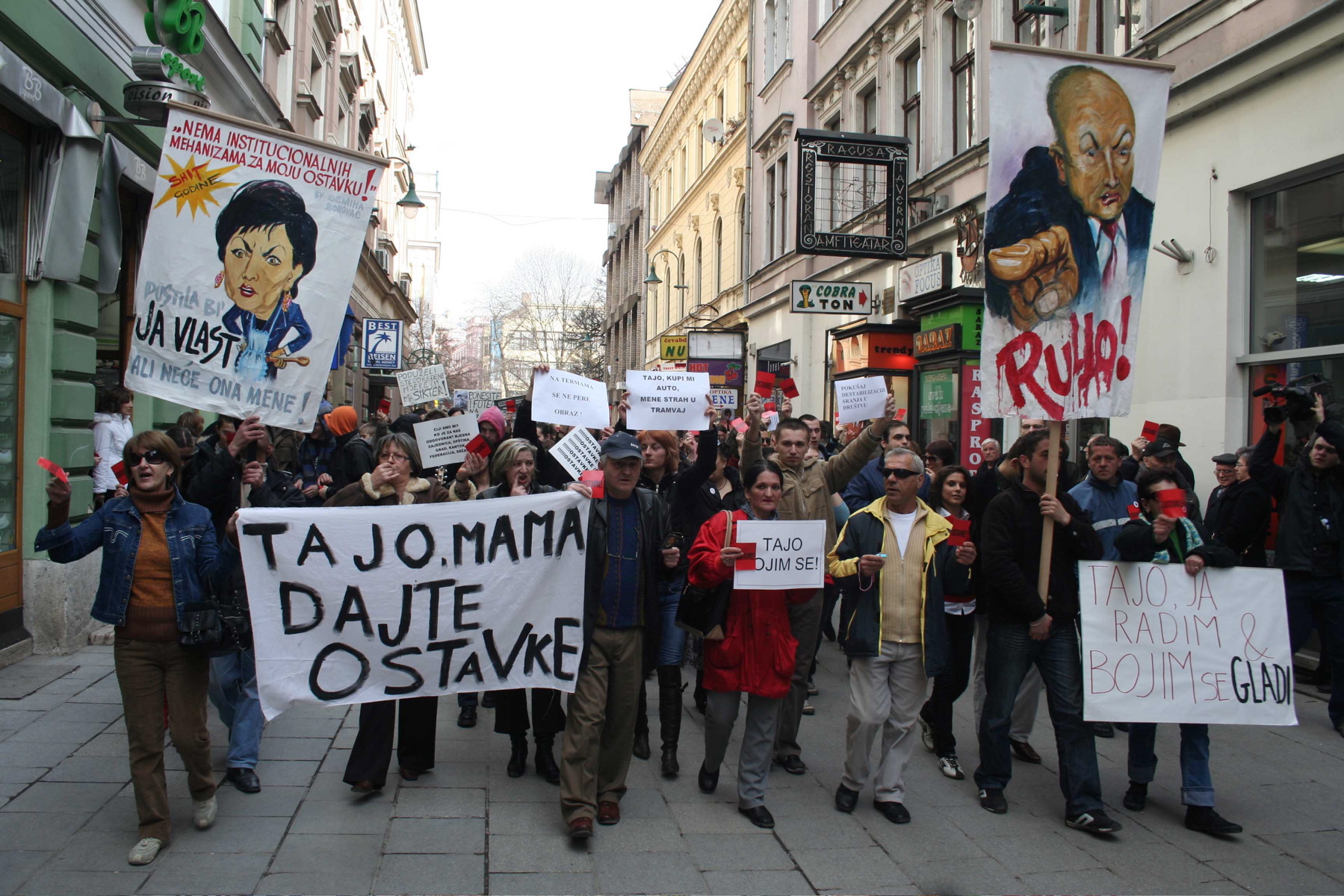 The demonstrations that took place in the Bosnian capital over the past months, from those against social degradation to those against corruption in politics and in the sports world, mark the growth of a civil society free from nationalist rhetoric

On February 9, before the calendar marked the official spring equinox, the Sarajevo "spring" started. The first massive protest (an estimated 10,000 people; an exceptional figure for Bosnia and Herzegovina) was triggered by the shock over the murder of an adolescent, killed in a crowded tram in broad daylight. The protest was organized in just four days through the online forum Sarajevo - X. Numerous rallies followed and continued to stir a Sarajevo public, fed by general discontent with a political establishment seen as corrupt and incapable of leading the country.

"Resign Now!" the slogan in the first phase of public mobilization, was addressed to the premier of the Sarajevo canton, Samir Silajdzic, and the Sarajevo mayor Semiha Borovac. The two politicians were seen as those primarily responsible for the city's social decay. Over time, the number of protesters significantly decreased, but the decline of the initial emotions set the stage for a deeper and informed reflection on the country's problems. This debate largely continued to unfold in virtual space.

Symbolic rallies and counter-rallies nevertheless continued to enliven the city, with the support of some media (the Dani and Start magazines donated whistles and stickers) and the pounding beat of "engaged" bands such as Dubioza Kolektiv and Frenkie.

Over the last weeks, even other groups traditionally disassociated from civic movements, have used the pretext of public protests to express their own discontent. On May 23, football fans protested wrongdoings by the Football Association by marching to the association's office and chanting angry slogans.

Different segments of society seem to be overcoming the distrust towards public protest, as a form of dissent traditionally limited to a small minority of engaged individuals. Furthermore, the big news is that protestors do not use the easily available, yet destructive, nationalist rhetoric.

Since their beginning, Bosnian social movements have demonstrated their awareness of the difficulty of mobilizing people for protests, and they have acted to address this issue. "We have to keep in mind that this change represents more than a simple correction of errors in the system; it is about overcoming our own frame of mind, our fears and frustrations. As such, it demonstrates the further need for this type of collective psychotherapy," says Denis, activist with the Dosta! movement.

Rather than propose a united political opposition, the movements seek to catalyse the popular discontent, above all, but not only, that of young people. This is not difficult given the legacy of weak civil society inherited from the Yugoslavian era; but from a Western European perspective, the dynamic of these movements becomes complicated to understand. A specific agenda and recognized leadership is lacking; in addition, the movements' predominant sentiment is anti-political. These are probably the most central issues concerning the future of the Sarajevo spring.

The absence of commonly recognized leadership further proves that the movement is in an embryonic phase. The commentator Samir Sestan notes, the "battle only lacks commanders" and has, until now, generally maintained an informal character. Asked if the protests would continue, Sunčica24, one of the voices of the group Citizens of Sarajevo, responds that "this depends only on the citizens... for collective actions we need the feedback from the citizens."

The use of the word "feedback", part of information technology vocabulary, indicates the role that virtual space has taken in the protests. The Sarajevo-X forum has been the "virtual street" for expression of the sentiments and views of the people. Numerous blogs created by private citizens over the past months have been used to coordinate protests, make demands to authorities, or send out press releases.

According to a 2005 study by the IFIMES research institute, the birth of a virtual public sphere in BiH "could contribute to the transformation of a latent and passive public into an active one, which could bring out evolved forms of public initiative, similar to those in countries with vibrant democratic traditions."

However, in a country where only one person in fifty uses the Internet, virtual debate would exclude the participation of a huge part of the population, especially population living outside of urban centres. This virtual debate would contribute to the already existing sharp disparity between the centre and the periphery.

However, because of virtual spaces, the movement gained great visibility, thereby prompting reaction by the authorities. From their initial inaction in responding to the first rallies - in the protest on February 13, the police looked on without intervening while the crowd threw rocks at the Sarajevo canton's office building - authorities moved towards more repressive actions. This indicates that authorities became aware of the power of public mobilization and that they decided to act rather than simply sit and watch.

"Authorities have realized it was dangerous to concede the streets to the crowds and they decided to act, to launch a campaign of preventive intimidation," writes Valentina Pellizzer, director of www.oneworldsee.org.

The movements accuse the state of having abused its power by using force. Authorities accuse the movements of having caused disorder and provoked huge material damages. Media reports centre on mutual accusations of violence, which aim to discredit the opponent's legitimacy - thus, producing the typical dynamic of confrontation by dialogue being replaced by demonisation of the adversary. The intensity of these mutual accusations is by no means lesser than that of the physical clashes in the streets.

In this respect, the views of progressive intellectuals and those who are ideologically sympathetic with the movements differ. Senan Avdic sceptically argues that one "does not destroy injustice" with destructive violence. Samir Sestan, underlines the unwillingness of the movements to take full responsibility for their actions in the streets, yet launches through the pages of Start a call to self-defence from bad government and announces "days on fire".

The Sarajevo spring could turn into a hot summer of turmoil. If the process is not coordinated and given direction, as desired and attempted by many involved, as for example by the newly formed NGO coalition "Odgovornost" Responsibility, the awakening of civil society in BiH would ultimately be delayed. This would be to everybody's detriment.