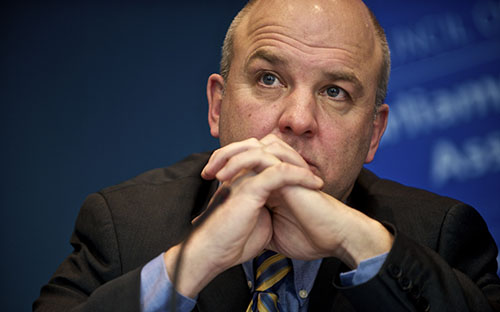 Nils Muižnieks, Commissioner for Human Rights of the Council of Europe, made public on 10 March his report on the state of human rights in Armenia. Our interview

Mr. Muižnieks, why did the Commissioner for Human Rights travel to Armenia?

My trip to Armenia took place in the frame of the ordinary programme of meetings that I have in the 47 member countries of the Council of Europe. During these visits I identify two or three major issues that I want to look at in depht, concerning the status of human rights in the country.

Which are the main findings of your visit?

We focused on two issues: the administration of justice and gender equality, women's rights. I found that a lot still needs to be done to reinforce the independence of the judiciary, in particular with respect to the President [of the Republic], whose role is too large in the appointment and dismissal of judges. In Armenia there is also a general problem of prosecutorial bias and dominance of the prosecution within the system. The rights of the defense and equality of arms need to be strengthened in the context of a fair trial.

Listen to the full interview to Commissioner Muižnieks

Are these problems common to post-Soviet countries or specific to the Armenian system?

The prosecutorial bias is prominent in other countries as well. I found similar problems in Moldova and Russia.

Does this mean that prosecutors are under political influence?

Not necessarily – although, as in many other countries, there are instances of selective or politicized justice. But mostly we talk of a very low acquittal rate, around 3% in Armenia. Then there are very close links between prosecutors and judges – often a prosecutor becomes a judge. In general, the role of defense in the system is extremely weak.

Your report highlights the dramatic phenomenon of violence against women, and in general gender inequality in Armenian society. How deep is this problem?

During my last visit to Armenia, a year ago, I had become especially concerned about the attacks against women's rights organizations and individual activists, as well as the statistics on pre-natal sex selection.

The visit to Armenia of the Commissioner for Human Rights of the Council of Europe took place between October 5th and 9th, 2014

- Read a summary of the conclusions (i nfographic )

What does this mean exactly?

In Armenia there is a huge imbalance between boys and girls. It is a widespread phenomenon in the entire Caucasus region, but also in the Western Balkans. In Armenia, however, it is particularly widespread. Statistics indicate that parents tend to selectively abort based on gender, suggesting that boys and girls are not considered to be equal. This is confirmed by the lower participation of women in political and public life. Then, there is a disturbing phenomenon of domestic violence, which clearly has not been met by an adequate response. We have had cases where even politicians justify domestic violence in their speeches, or police officers not sufficiently trained who victimize women. There is only one safe house for women throughout Armenia...

Exactly. I asked the authorities to give a clear political signal on this phenomenon and make it clear that violence against women is unacceptable and will not be tolerated, that attackers will be prosecuted. I also asked to provide support to organizations working in this field and fund more safe houses as well as to train police forces and adopt appropriate legislation. Armenia should ratify the Council of Europe's Convention on preventing and combating violence against women and domestic violence , because it is the most important international document on the subject, and Yerevan could gain much from being part of the mechanism of the Convention.

How can you contrast the phenomenon of pre-natal selection?

Part of the answer lies in addressing the motivations behind this problem, to stress that boys and girls have the same value, it is a long educational path. We can also involve professionals, asking them not to reveal the gender of the fetus in the first three months of pregnancy – this information is not necessary in the first quarter. Finally, the process should involve the ombudsman and other human rights officials.

This is a long-term problem which, if not addressed, can lead to a very skewed sex ratio in society. I was very strucked in learning that in a region of Armenia there is a ratio of 124 males to 100 females, it is a huge disparity, which can lead to very serious social problems in the future. I think in general we need to open a public debate on these issues and do everything possible to make people understand the value of girls and women in society.

What is the state of the investigations for the victims of the clashes of 2008?

The issue of the killings of 2008 has not yet been resolved, meaning that those responsible have not yet been punished. Seven years after the facts, the families of the victims are not satisfied with the results of the investigation.

Your study also illustrates reports of ill-treatment in detention by the police. Is this about torture?

There are numerous reports of ill-treatment by the police of arrested or detained persons, complaints that were documented by the Committee for the Prevention of Torture in the visits of 2010 and 2013. I have received numerous reports on this issue myself. It is clear that we need to do much more. First, we need to reduce the weight of confessions obtained by the police or by investigators under duress. People under detention or arrest must also be immediately ensured the presence of a lawyer and have access to medical care, and prosecutors should catch the bad apples who commit acts of violence.

How much does the conflict in Nagorno Karabakh influence the state of human rights in Armenia?

Any conflict in which people are killed every week, if not every day, has negative effects on human rights, at different levels. In general, human rights are sacrificed on the altar of national security when there are conflicts. But I was pleased with some of the changes that I have seen recently in Armenia, in particular the introduction of conscientious objection and development of alternative services. These are steps forward that I consider very positively.

So young Armenians can actually enjoy these options now?

Yes, and the service is truly civilian and not linked to the military. I also understand that the number of non combat deaths has decreased, although there is still lack of trust between the families of the victims of these episodes and the authorities.

Has the problem not been addressed to the satisfaction of the families?

In some cases yes, in others not yet. In one case, for example, there were convictions, but unsatisfactory for the victim's family, that regarded the case as one of murder, and not as incitement to suicide. There needs to be more dialogue between families, associations, and authorities to build trust, but I can see some progress also in this field.

Regarding the general situation of human rights in the region, do you see similar problems in Armenia, Azerbaijan, and Georgia, or are there significant differences?

I think there are some very similar issues – for example, the independence and impartiality of the judiciary. It is a common stray, perhaps more serious in Azerbaijan, where all the major partners of my office – human rights defenders – have been recently recently jailed and prosecuted on charges that, to put it very honestly, lack credibility. So I would say that Azerbaijan is a special case. The problem of the independence of the judiciary, however, affects the entire region, and so does ill-treatment of detainees. In Georgia it was a huge problem...

The conditions of prisons and places of detention...

Yes, pretty dire. The situation of the prison that I visited in Azerbaijan, was actually not so bad, although in this country I have been occupied more by the problem of who is in detention rather than the conditions of detention itself. With regards to gender equality, this is an issue in all three countries. Maybe in Azerbaijan and Armenia there is less awareness. Neither Baku nor Yerevan has ratified the Convention against violence on women. There are common reasons for concern, although I think that the situation in Azerbaijan is a bit specific, because of the crackdown against human rights activists that has taken place in the last few months.

I was very pleased with the tone and the intensity of dialogue I had with Armenian authorities, I have been received at the highest levels and I hope in the continuation of this dialogue, with both institutions and civil society, to promote real progress on these issues. The report is only the beginning of the process.