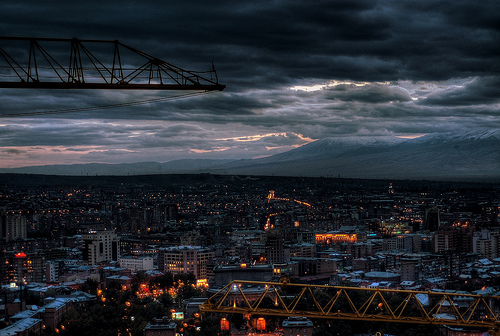 Urban development concerns over church territory restoration in Yerevan. After the destruction of city parks and controversial projects such as Northern Avenue, the reaction of residents against the planned demolition of historical Cinema Moscow Open-Air Hall

Plans to demolish the only open air cinema hall in Yerevan have angered many city residents as well as raised further doubts about the process of urban development in the country's capital. Ten years ago, the city’s parks were largely decimated to make room for a myriad of cafes, most of them owned by government officials or their relatives and business associates. A few years later, in the mid 2000s, the forcible eviction of residents from their homes in the city center marked the continuation of what many saw as a corrupt land-grab.

Offered inadequate compensation, many of the luxury apartment blocks which replaced family homes for prestigious urban construction projects such as Northern Avenue still remain vacant. Human rights and civil activists, as well as environmentalists and architects, remain appalled by such developments, especially as many green areas and historical buildings were destroyed in the process. Now, the latest threat comes not from large government-connected businessmen or oligarchs, but from the Armenian Apostolic Church.

Although settlements have existed in the location for nearly 3,000 years, Yerevan itself came into being in the 1920’s in a grand scheme designed by architect Alexander Tamanyan. Reaching a population of 1.2 million by the time independence was declared from the former Soviet Union in 1991, Tamanyan's plan did not, however, envisage the city accommodating more than a few hundred thousand. Prior to the Soviet era, Yerevan had a population of just 12,500 by the turn of the 20th Century.

During the city's development, however, there was also some controversy. During the period of atheist Soviet rule, a church was destroyed in the 1930s, and in 1968 an open air cinema hall was constructed in its place.

Regardless of the rights and wrongs of that decision, the hall has since become a structure of architectural importance and had been included in a list of protected cultural sites in the city. At the end of February, or early March (details remain vague) the cinema hall's status was unexpectedly changed by the government with permission given for a new church to be once again built on the same location. While some residents approved of the move, many more did not.

Some considered the plans warning of the growing power of the church, while others lamented yet another example of chaotic town planning. And, despite the otherwise polarized political environment in the country, the decision provoked outrage across party lines. While not necessarily opposing the construction of any new churches, opponents argue that this should not be at the expense of the only open air cinema hall in the city which is also used to hold concerts in the summer months.

Letters were sent to the prime minister and the Catholicos, head of the Armenian Apostolic Church, protesting the development, but to date there has been no response from either. And while a petition has collected over 4,000 signatures in just a few days, with as many joining a related Facebook group, it wasn't long before notable architects and other cultural figures joined young activists in their protests. Another petition, set up online and so far attracting over 700 signatories, outlines the protesters’ concerns.

“While the Mother See of Ejmiatsin is justified in its desire to build another church in the place of the lost one, doing so by demolishing a unique architectural monument is simply irresponsible and is a blatant repetition of the criminal 'mistakes' made by the Soviet Government in the 1930s”, it states.

“People in Armenia, including the Architect's Union, numerous artists, filmmakers, writers and intellectuals as well as thousands of concerned Yerevan locals have come together to protest the demolition of the Hall. We believe that the removal of the Hall from the list of protected monuments sets a very dangerous precedent that will unquestionably lead to more illegal and irresponsible destruction in Yerevan and elsewhere.”

Speaking at a press conference last week, the Union of Architects of Armenia was particularly scathing, accusing the government of unlawfully removing the hall from the list of protected buildings. “It’s a committee of experts that defines the state list of monuments to preserve and so it should be the same committee that removes monuments from that list as well. However, the Ministry of Culture hasn’t followed that process”, Mkrtich Minasyan, the Union's president said.

“The Armenian Apostolic Church is our history, but it cannot make our present and future its hostages. From this point, it is important that the Church accepts the importance of secular values and recognizes its partial responsibility for their preservation”, added the daily Lragir newspaper. Meanwhile, one of the main activists behind the campaign is 21-year-old Maneh Tamanyan, granddaughter of the main architect responsible for Yerevan's initial design.

“We heard about the plan to remove the hall from the list on 25 November last year, and that’s when we started to think about what we could do to prevent it”, she told Osservatorio Balcani e Caucaso. “We’re not exactly sure when it was eventually removed from the list, but I should repeat that we’re not against building churches. We’re against destroying something of architectural importance in order to do so. If you want to build something, you shouldn’t destroy something else in the process.”

Despite failures to stop urban construction plans in the past, Tamanyan nonetheless feels confident that this time she and other activists will be successful. “At the moment, if someone has money or power, they think they can build anything they like”, she explains. “There have been similar cases, but we’ve never managed to get as much support as we’ve been able to in this case. This is the first time such an issue has become so important with everybody talking about it. This is also not my grandfather’s vision of Yerevan.“

(In the two days since this article was written, activists collected a further 14,000 signatures against the planned demolition from residents on the streets of Yerevan)