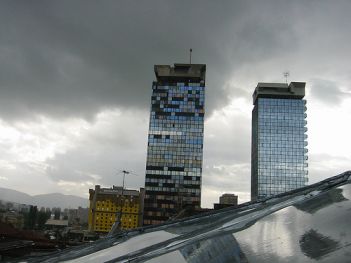 My father, Tito and the Americans. The construction of a new, enormous American Embassy in Sarajevo takes the author back on a journey into the past, from the Socialist period to a night in 1995 in Grbavica

In Sarajevo, last October 12th, during her recent trip to the Balkans, the American Secretary of State, Hillary Clinton, inaugurated the new American Embassy. Here we offer our readers the article “The American Friend”, written in April 2008 when the first stone was laid, and then selected for the Journalism Prize ‘Writing for Central and Eastern Europe 2008’, Vienna (AUT).

The first stone for the future American Embassy in Sarajevo has been laid. The building will be erected in the finest, most central point in the city. Right next to the monument to President Tito.

I’m sure Tito, were he alive, would have nothing against his new neighbours. He had already made peace with the Americans at the beginning of the 50s, straight after the break with the Soviet Union in 1948. Tito refused to subject Yugoslavia to the power of the Comintern, the international organization which coordinated the Communist parties.

Tito’s no to Moscow set off an earthquake in the Communist block, drew applause from the West and created a storm in Yugoslavia. The Yugoslav communists, taught to admire and accept without reservation all that came from the Soviet Union, suddenly found themselves facing a dilemma: Mother Russia or Yugoslavia. Those who were not quick enough to change their prevailing mindset finished up on Goli Otok, the Bare or Bald Island – a prison, a Yugoslavian Gulag.

It remains a family mystery why my father did not end up on that island. He was fiercely pro Russian. What is more he seems to have had difficulty loving one group without hating the other. He couldn’t stand anything coming from the capitalist world, American above all. For him it was all dangerous, including the English language, mere propaganda and as such to be avoided.

He spoke French and German, but he forbade us to watch TV; just imagine his attitude to films in English. At the first words heard he shouted orders to “Switch off!” immediately.

In the 60s the first American films and other TV programmes appeared on our screens. The TV serial “Bonanza” was very popular: a sort of “cowboy-soap opera”, which was a real discovery for us after the boring films about the invincible partisans.

I still remember that programme, not for its excellence, but for the two slaps I suffered thanks to “Bonanza”. I complained because my father wouldn’t let me watch it. Cross, I turned my back on him, weeping desperately. He felt offended and “bang” he gave me two whacks.

His ideological conviction cost us a fair amount of money. At school I obviously studied Russian. But we soon realized that without English you don’t go far, in whatever profession. So, first my parents, but then I too, paid for private English lessons from our own pockets. All in silence, without my father ever officially rehabilitating the English language.

As the years passed his aversion to English and the Western world in general abated, but Russia with all its appendages never lost its supremacy. Or almost!

During the last war my father remained in Grbavica, a quarter of Sarajevo occupied by nationalist Serb paramilitaries. Both my father and his old friends, whether Serbs, Croats or Bosnians, felt offended, betrayed and humiliated by the behavior of the nationalists who, it was said, “aimed their weapons at their own brothers”.

Shortly before Sarajevo was reunited, the Russian soldiers arrived in Grbavica as part of the international forces. My father welcomed them as liberators, bearers of justice, who would finally put things in order.

But the “batjuška”, the “allies”, arrived holding up three fingers, the gesture used by Serb paramilitaries or any other criminal come to steal, harass or kill. The Russian soldiers openly showed their sympathy exclusively for the Serbs!

Apart from the beginning of the war, for the people left in Grbavica the most dramatic time were the two months preceding the reunification of Sarajevo. All that they had not already stolen or destroyed during the four preceding years, the Serb paramilitaries hurried to conclude in those two months.

Everyone was in danger, including the Serbs who refused to leave Grbavica. Serb propaganda encouraged them to leave and destroy everything so that it would not fall into the hands of the “balije”, the derogatory term used for the Bosnian muslims. Some of them, those who decided to leave Grbavica, even opened up tombs to take the remains of their dear ones with them.

In those days the Grbavica neighbourhood looked like somewhere out of a biblical tragedy: scenes of panic everywhere, the last crimes hurriedly committed, lorries and carts drawn by animals full of stolen stuff, people crying for their dead who were long buried. It was just like an old Bosnian saying: “Good times for bad people”.

On one of those darkest nights, not only for there being no light, but also for what was happening from a human point of view, the Serb paramilitaries parked a lorry outside a half empty block of flats. On entering the flat they shut my father in the bathroom, and calmly spent the whole night carrying off what was left: radiators, lamps, pictures, windows, pans, beds, sofas, carpets, linen, personal belongings like the medals my father and mother were decorated with for their part in the Second World War. The electrical appliances, television, radio, video recorders and other such items had all been stolen at the start of the war.

From time to time one of the criminals went into the bathroom and when my father, terrified, got up he was ordered to stay seated “because if you stand, old man, I can’t cut your throat”. They were looking for money he did not have.

In the end, at dawn, they set fire to the flat with my father shut in the bathroom. He was saved by friends and neighbours. A Serb family took him in and kept him hidden in their own house for about a month. They ran the risk of all of them being killed if discovered.

All this we learnt later. But first we spent five days without knowing what had happened to our father. Five days of fear, panic, frantic searching for what to do and how. We heard only “he’s not there”, nothing more.

I remembered that an American, a certain Daniel, a journalist colleague, was in Sarajevo, but in the other part, the one under the control of the central government. With great difficulty I managed to contact him via satellite telephone, something rare and costly at the time. Another American, a certain Laura, was involved in this desperate search. I begged them to do “something” for my father.

Daniel, risking his own life in the chaos that reigned in Grbavica in those days, went to look for him in an armoured vehicle of the High Commission for Refugees. The first time with no success. The second time, however, Daniel managed to discover that my father was alive and where he was hiding. To help him he left 500 dollars! Riches that could save your life.

This story came to mind when reading that the Americans were going to build an Embassy in Sarajevo.

Today the people of Sarajevo hope the Americans will install this building as soon as possible: one of the usual ones with five underground storeys and ten more above, maybe with several bunkers, secret corridors, the latest spying technology, even weapons, in short, all they fancy.

And what about my father? I don’t think he would have anything against an American presence. On the contrary! He survived the war, saw Sarajevo reunited and the family too after five years of separation in five countries on three continents.

I, after all, saw him drinking a schnapps with the American friend, Daniel. My father was patting him on the back, saying something which in English would mean “Friends, friends”. Then he left me to interpret. My father spoke in Bosnian and then, patiently and at length, listened to my translation into English, confirming the words with a nod of his head.