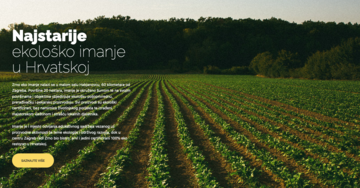 The winners of the new European competition for the promotion of organic farming will be announced this week. Among the possible winners, a Croatian farmer and a Bulgarian town

The award ceremony for the first EU organic awards  will take place on 23 September in Brussels, on the occasion of the European Organic Day.

Organic production has been identified as a key element for achieving the objectives of the European Green Deal, and for the “Farm to Fork” and biodiversity strategies.

Indeed, the Commission believes that the increase in organic agriculture and aquaculture can contribute significantly to reducing the use of chemical fertilisers, pesticides, and antimicrobials and improving the climate, the environment, biodiversity, and animal welfare as well as support farmers' incomes and rural development.

For these reasons, the Commission has set the target of allocating 25% of the EU agricultural area to organic farming by 2030 and significantly increasing the use of organic aquaculture.

To this end, the action plan includes the launch of annual awards that recognise excellence in the organic production chain. The aim is to reward the best and most innovative organic producers who contribute to reducing the impact of agriculture on the environment and climate. For this reason the EU Organic Awards were created.

The finalists of the first competition have recently been announced.

Applications come from any actor or institution in the organic production chain with an excellent, innovative, sustainable, and replicable project that contributes to greater accessibility and affordability of organic products in the EU.

Some of the finalists come from the countries covered by OBC Transeuropa. David Pejic and his company "Zrno eko imanje" are competing for the "Best organic farmer in the EU" award.

David's organic farm is located in the small village of Habjanovac, in the municipality of Dubrava, 60 kilometres from Zagreb. On an area of 20 hectares, the company carries out organic wheat production, processing, and baking. “Zrno eko imanje ” is a place for raising awareness and training on the issues of ecology and sustainable development. The same ownership, in downtown Zagreb, manages the “Zrno bio bistro”, the first and only 100% organic certified restaurant in Croatia.

Nominees in the category "Most organic city in the EU" include Troyan, which hosts the first municipal agricultural complex ever built in Bulgaria, consisting of greenhouses, orchards, and organic apiaries. The products are used for retirement homes and for the canteens of local kindergartens, enrolling 750 children. The focus is on short supply chains and providing healthy food for children. Troyan has extensive communal land and, before starting the project, it studied the experience of a French municipality and consulted partners in Italy.

Cultivated areas include, for example, 0.3 hectares planted with apple trees which are designed to produce 10 tons of apples per year when fully operational. The municipality has calculated that preschool pupils need about seven tons of apples. There is also an orchard with the area's flagship fruit, plums. The 0.3 hectare orchard was planted about five years ago and is expected to produce between 900 and 1,500 kg of plums per year. Everything is entrusted to a local horticulturist, aided by the gardeners and workers of the municipal multi-service company who lend a hand when there is more work, during the sowing and harvesting periods.