Lawsuits like bullets. Who is afraid of journalists? The MFRR Italy Mission Report 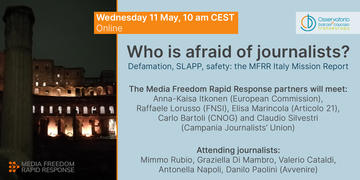 With an open dialogue among journalists, the MFRR and the European Commission, on 11 May the Media Freedom Rapid Response launches the publication of the report containing the findings of the Italy Mission, which took place in Rome and Naples from 4 to 6 April

On Wednesday 11 May, at 10 am, an online event was organized by the delegation of the MFRR that visited Italy one month ago for meetings with the Constitutional Court, with MPs, with the Police and several journalists, freelancers, and reporters under police escort.

The fact-finding mission was meant to assess the legislative delays that are preventing Parliament from responding to the repeated calls of the Constitutional Court in reforming defamation laws, and to get to know the coordinated State monitoring and protection system implemented in Italy for intimidation acts against journalists, a good practice mentioned in a recent Recommendation of the European Commission.

The MFRR delegates will present the findings and the conclusions written for the report, which will be available online on Wednesday.

The Italian stakeholders which helped in organizing the mission - the FNSI (Italian Federation of Journalists), the association Articolo 21 and the Order of Journalists - will be represented by Raffaele Lorusso, Elisa Marincola and Carlo Bartoli. Claudio Silvestri of the regional journalists' union of Campania will give a picture of the difficulties of unions in a territory where organized crime is so powerful.

Italian journalists have confirmed their presence: Mimmo Rubio, Graziella Di Mambro, Valerio Cataldi, Antonella Napoli and delegates of the editors of the newspapers Avvenire and Domani.

Simultaneous translation between English and Italian is available.