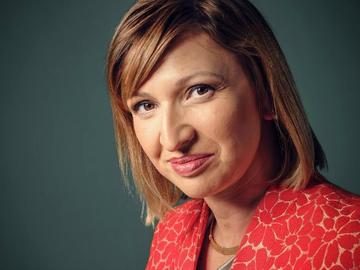 After a journalist involved in the campaign against BIRN in Kosovo in 2009 said the ruling party had been behind the whole affair, the party has hit back calling the claim 'a fairytale'

Basri Musmurati, the secretary of Kosovo’s ruling Democratic Party of Kosovo, PDK, has dismissed claims that the party was behind a campaign against BIRN Kosovo in 2009 as “fairytales”.

“I am not interested in commenting on Milaim’s statements or if he is right or not. I don’t care about his fairytales,” Musmurati said.

He was referring to Milaim Zeka, a journalist who worked in 2009 for the TV programme “Pa Rrotlla” and had close links with PDK - and who apologized on December 22 for taking part in a campaign in 2009 against BIRN Kosovo and its director, Jeta Xharra.

“I feel so bad. I am awfully sorry that because of the [false] rumours and papers they [PDK officials] showed me, I took it upon myself to attack Jeta Xharra. Do you understand me? They were coming with papers and saying; 'Jeta works for so and so … look who Jeta is,'” Zeka told a local TV show "Komiteti" broadcasted on December 22.

In May and June 2009, a since closed newspaper, "Infopress", and Zeka’s program, “Pa Rrotlla”, launched a campaign against BIRN Kosovo and its director.

In 12 articles published by Infopress, Xharra was called a “Serbian spy”, a “professional bomb”, an “embassy slut” and subjected to other insults.

In June 2013, a panel of judges found five defendants not guilty of threatening Xharra and violating her rights in May and June 2009.

The court ruled that the articles did not pose a grave threat to Xharra even if they had damaged “her honour and reputation”.

They launched a campaign against Xharra after Radio Television Kosovo, RTK, aired an edition of BIRN’s TV programme, "Jeta ne Kosove" ("Life in Kosovo",) dealing with problems of freedom of speech in Kosovo and alleged mismanagement in Skenderaj/Srbica where Lushtaku was Mayor at the time.

The program also included a feature on how BIRN’s investigative crew had been attacked and chased away from Lushtaku’s Skenderaj municipality at gunpoint while trying to film a report on local governance.

The newspaper issued an implicit threat in one of the articles, stating: “Jeta has herself chosen not to live a long life”.

Zeka was one of the journalists who wrote against Xharra in the campaign, organizing an hour-long program on public TV with guests from "Infopress" who attacked the BIRN investigation into Skenderaj/Srbica.

In a telephone conversation with BIRN, Zeka again confirmed that the PDK had been behind the whole campaign.

“These are not fairytales that I said; these were public accusations that they made against Jeta Xharra and other people. They [PDK high officials] did not know anything else except to accuse people of being spies for different services,” Zeka said.

“We should be ready for more such confessions. Unfortunately, the number of pundits and servants who deceived the public with their false journalistic reports based on false accusations ... is high, not only in Kosovo but in the entire Balkans," she said.

“I did not, I do not and I will have nothing in common with such 'journalists' who serve as political hitmen of different groups of interest,” Xharra added.