European Centre for Press and Media Freedom founded in Leipzig 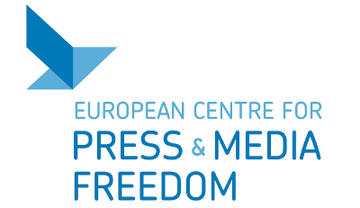 Representatives of 20 journalists associations, publishing houses, academic institutions, trade unions and media rights experts from many European countries have founded the European Centre for Press and Media Freedom (ECPMF) in Leipzig today. Based in Leipzig a team of six starts working after the Centre has now been established as an independent non-profit European Co-operative Society (SCE)

The co-operative’s mission is to unite Europe’s highly fragmented media freedom community and to address media freedom violations in EU member states and beyond. Violations of press freedom will be observed, researched, registered and continuously reported to both the public and the political spheres. The ECPMF will work as a registration office, and as contact point for organizations and individuals.

Henrik Kaufholz is head of the Danish investigation initiative SCOOP and appointed the first Chairman of the Executive Board. He states the ambitious aim of the Centre: “The Centre is meant to be the lighthouse of press freedom in Europe. It will bring together different initiatives and promote closer co-operation among European activists. We will strive for common standards of media freedom across Europe.”

Board Member Ljiljana Smajlović, Head of the Serbian Journalists’ Union, stresses the urgent need for institutions that will heed the warnings of journalists on the ground and urges Brussels to listen too. “Many violations of media freedom are under the radar of European politicians.”

“We are very happy about the success of this initiative that everyone has worked very hard to achieve” says Hans-Ulrich Jörges, Editor in chief for Special Affairs at the publishing house Gruner+Jahr. “This European Co-operative Society can operate independently across the whole of Europe due to its special structure.”

Stephan Seeger, Managing Director of the Leipzig Sparkasse Media Foundation, says: “Leipzig as the nucleus of the Peaceful Revolution of 1989 is the ideal location to establish the ECP. Tens of thousands of Leipzig citizens protested against the communist state and demanded freedom of the press. In addition, the Media Campus – located in walking distance – with the latest communication technology and flexible room solutions offers optimal conditions to host the centre and to organise its workshops, seminars and meetings”.

Amongst the founding member organisations are the European Federation of Journalists (EFJ), the regional branch of the International Federation of Journalists (IFJ), which has 600.000 members worldwide. The campaigning organisation Index on Censorship also joins as a founding member. With the Russian Mass Media Defence Centre and academic institutions from Greece to Portugal, the Co-operative includes a wide spread of different interests in the legal, journalistic, academic and freedom of information communities.

The following distinguished persons have been appointed to the board:

In a worldwide perspective, the ECPMF is unique in its dimension, structure and ambition. The Media Foundation of Sparkasse Leipzig has devoted two years of intensive work to the development of the ECPMF and applied successfully in close collaboration with partners from three other European countries and has now been awarded a grant for 2015/2016 of 749.000 Euro from the European Commission.

The project partners are:

Additional major financial supporters for the first year of the ECPMF are the City of Leipzig, the German Foreign Ministry and the Media Foundation of Sparkasse Leipzig. On the occasion of the founding assembly of the ECPMF the State Chancellery of Saxony handed over a donation of 100.000 Euro to support the initiative.

From its very early stages, the setting-up of the project was intensively supported by Hans-Ulrich Jörges, Member of the Editorial Board of the magazine STERN and Editor in chief of Special Affairs of the publishing house Gruner+Jahr, and Christoph Keese, Executive Vice-President of Axel Springer SE.

ECPMF’s activities will be based on activities that promote the spirit and the values of the European Charter for Press Freedom signed in 2009 by 48 editors in chief and leading journalists from 19 countries and subsequently notified to the European Commission.

To prove the European scale of activities right from the beginning, the project partners of the ECPMF will have a meeting with the president of the European Parliament Martin Schulz on 30 June followed by a discussion and press conference in the European Parliament that brings together experts on press freedom, prominent journalists and media policy researchers in order to consider these issues and highlight the struggles on the ground.