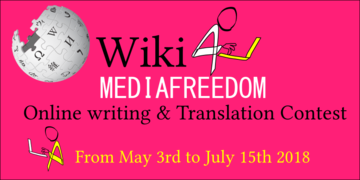 On the occasion of the World Press Freedom Day, which is celebrated today, OBCT launches an online contest to translate and improve articles on media freedom on Wikipedia

A new project for Wiki4MediaFreedom - the initiative launched by OBCT in 2015 as part of the European Center for Press and Media Freedom, with the aim of curating content on media freedom issues on Wikipedia, the largest free online encyclopedia and the first daily reference point for millions of users all over the world. Over almost three years, we have built a sort of “European encyclopedia of press freedom”, creating and refining dozens of entries on media systems, transparency of media ownership, censorship and self-censorship, access to information, independent media and other actors who work for freedom of the press and pluralism throughout Europe, and in particular in South-eastern Europe, the Visegrád countries, the Baltic countries, in Turkey and in the Eastern Partnership.

All the Wikipedia articles created within the initiative Wiki4MediaFreedom are available also on the Media Freedom Resource Centre .

It's time to call on the Wikipedia community to share the work of Wiki4MediaFreedom, so that the content we have created in these years can be available in languages other than English and enrich Wikipedia on an important European topic such as media freedom and pluralism. For this reason, on the occasion of World Press Freedom Day, we launch a transnational and multilingual Contest for translating and improving the entries on press freedom in various languages in addition to Italian, in particular in Albanian, Serbo-Croatian-Bosnian and Bulgarian.

Starting from today, and until July 15, 2018, Wikipedia users will be able to adopt an entry on freedom of the press and translate it into one of the languages ​​of the competition, or improve its English version by adding the perspective of a specific country or sources by local actors, media and research centres engaged in monitoring and defending press freedom. Participants may also decide to propose new articles related to the subject of press freedom and media pluralism, such as articles on independent newspapers or local journalists who lost their lives for their work, such as the articles about Daphne Caruana Galicia and Ján Kuciak, which are currently present only in a few languages.

The translated or improved articles will be evaluated by a jury, that will assess the quality of the content added or translated. The best work will be rewarded with coupons for the online purchase of books. Three prizes will be assigned for each category: translation and improvement.

The rules for participation are available here. For more information, please contact vignola@balcanicaucaso.org

All the Wikipedia articles created within the initiative Wiki4MediaFreedom are available also on the Media Freedom Resource Centre .