Macedonia, Bosnia and Herzegovina and Turkey: the 2016 winners of the EU Awards for Investigative Journalism 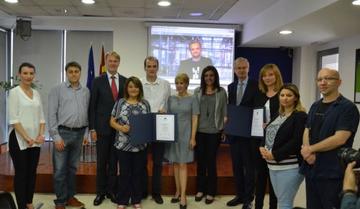 The second EU Investigate Journalism Awards in the Western Balkans and Turkey have been announced in Macedonia, Bosnia and Herzegovina and Turkey

Following the announcement of the Serbian, Albanian, Kosovar and Montenegrin winners of the second EU Investigate Journalism Awards in the Western Balkans and Turkey, now it was Macedonia's, Bosnia and Herzegovina's and Turkey’s turn.

The prize, established by the European Commission and DG Enlargement, aims to award quality news stories, in the context of supporting investigative journalism and monitoring freedom of expression in the seven countries concerned. The award will be given for a period of three years, from 2015 to 2017, each year referring to investigative journalistic works published in the previous year. There are three prizes for each country: first and second places and best investigative story by a young journalist, a category which appeared for the first time in the 2016 edition.

In Macedonia, journalist Boris Georgievski won the first prize for his series of articles “Dossier Telecom ”, published on the web-portal “Prizma” and uncovering a corruption scheme involving the company Telecom and its controversial relations with the Macedonian government since 2001. Also published on “Prizma”, the second prize went to the investigative series “Skopje 2014 Uncovered ”, by the team of BIRN Macedonia: Ana Petruseva, Tamara Causidis, Meri Jordanovska, Vlado Apostolov, Riste Zmejkoski and Zoran Ricliev. The series shed light on the amount of resources employed by the government on the facilities entitled “Skopje 2014”, as well as on corrupt relations involving entities working in the project. Finally, the third prize, best investigative story by a young journalist, went to Biljana Nikolovska, for her TV series "From unemployed to prisoners: how the system convicted and then amnestied 15,000 health insurance beneficiaries". It narrated how court proceedings were open against unemployed persons, at the request of  the Health Insurance Fund, accusing them of forging documents.

In Bosnia and Herzegovina, the winner was Siniša Vukelić, who got the first prize for his series entitled “Balkan investment bank robbery “, published by capital.ba. The second place went to Aladin Abdagić of Center for Investigative Journalism (CIN), for his piece “Čović's wealthy father-in-law “. Stefan Mačkić, in turn, received the award for young journalists, for a story published on “eTrafika” which looked into corruption in concession contracts in the Republic Srpska.

Heading East to Turkey, where recent journalist imprisonments put into question the country’s ability to uphold freedom of expression, four journalists received the EU award. The first prize went to Hilal Köse, who wrote the article "Such an atrocity has never been seen ", published by “Cumhuriyet” newspaper. The second prize went to Arda Akın, who wrote the series “89 Times Maşallah”, reporting false custom declarations by Reza Zarrab, a Turkish-Iranian businessman who is facing corruption charges in the USA. As for the category for young journalists, it had two winners: Burcu Karakaş, who wrote about the unclear deaths of women in the province of Van, and Canan Coşkun who exposed stories involving top officials’ misuse of power. The latter had appeared in court the very day of the awarding ceremony, charged with "insulting public officials when performing their duties", for which she may face up to 23 years in jail.

A total of 35 journalists have received the award in the 7 participant countries, with prizes amounting to 70,000 euros.