First Winners of the EU Award for Investigative Journalism announced 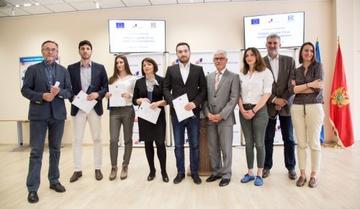 The EU Award for Investigative Journalism has been granted so far in Albania, Kosovo, Montenegro and Serbia, acknowledging investigations on corruption and social exclusion

In the past two weeks, the winners of the EU Award for Investigative Journalism in the Western Balkans  have been announced in four out of the seven countries taking part in the regional program. The prize is conferred as part of a 3-years regional scheme funded by the European Commission and DG Enlargement and coordinated by the Peace Institute in Ljubljana, with the The Guardian Foundation as an associate partner.

The award aims to promote outstanding achievements in investigative journalists, improving the visibility of quality reporting in the Western Balkans and Turkey. Investigations rewarded this year indeed underscore the great potential of journalism in contributing to transparency and the fight against corruption. Here is an overview of the awarded investigations, with links to the original works.

On May 6, 2016, in Pristina, the Press Council of Kosovo endowed the first prize to journalists Besnik Krasniqi and Ganimet Klaiqi, for their story published by Koha Ditore tackling corruption in the higher education system. The story “Illegal 'diplomatic' university” has been praised in particular for its impact, as it resulted in concrete actions undertaken by the authorities. The second award went to Parim Olluri for his investigation “The friend of Lushtaku benefits from Vala”, revealing the abuse of money and the public office in the capital city of Kosovo. The award for the Best story by young journalist was given to Leonida Molliqaj and Besnik Boletini for their story “Earning their daily bread”, addressing the life threats faced by individuals belonging to the Roma, Ashkali and Egyptian minorities in Kosovo who earn their lives collecting recyclable waste.

In Serbia, the first prize was granted to Aleksandar Đorđević for the story Pumping of coal mine and budget revealing a squander of public money in the rehabilitation of Tamnava coal mine following the floods which hit Serbia in May 2014, and sparkling intense public debate about corruption in the country. The second and third prizes went to Darko Šper for a series of articles dealing with court trial of the banned neo-Nazi organization Nacionalni stroj, and to Ivan Angelovski, Petrit Collaku, Kreshnik Gashi and Jelena Ćosić from BIRN for their story “Veselinović and partners got millions without tenders” disclosing how a public tender for road construction was handed to an inexperienced consortium linked to the controversial Serbian businessman Zvonko Veselinovic. The award for young journalists went to Snežana Đurić and Novak Grujić who published the series of articles “Municipal radar” on 11 public officials who failed to declare their assets.

The award ceremony in Albania was held on May, 12th. Journalist Leonard Bakillari was awarded first prize in Albania for his article on corruption in the judiciary system. The second prize went to Ornela Liperi for her investigation covering the financial crisis and debt situation of business companies in Albania. The award for young journalists went to Habjon Hasani for his TV report on the consequences of oil concession on Albanian economy.

In Montenegro, RTCG investigative journalist Mirko Bošković received the first prize for the serial entitled The Promised Land, an investigative TV show revealing the scheme of power abuse of local and state authorities in Montenegro during a decade long process of selling state-owned land. The second award went to Milena Perović Korać for her investigative story “As If It Was a War” and “The Police Covering up the Torture at the Night of Protests”, published in weekly Monitor. Ana Komatina and Vladimir Otasević (Centre for Investigative Reporting – CIN CG) received the prize for young journalists for their “Dossier Pua”, disclosing business ties between people close to Prime Minister Milo Đukanović and the Malaysian billionaire Wei Seng Pua, arrested in Las Vegas in July 2014.

The prizes for the other countries taking part in the regional scheme – Bosnia Herzegovina, Turkey and Macedonia – will be announced in the forthcoming weeks.