The Rites and Myths of Trieste 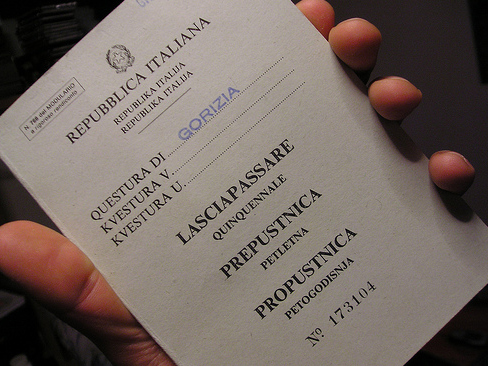 In Trieste, history has a problem being history. It is often a myth, quite often even a rite. If the past could actually produce history in this land, Trieste could make a step forward. And, it could think without fear, that it has always been a city of the border

"As I was just a little boy, you know, I remember my mom and Ms. Teresa going to Yugo to do the shopping..."

Many generations of Trieste grew up with these lyrics of the Lorenzo Pilat song. The song celebrated, if we can say it this way, the border's rites and myths; the border belonged to people's everyday life, but at the same time represented an unknown, a world not void of fear. The Yugoslav granicar, the "customs guy" from the title and the chorus of the song, represented the archetypical figure of the border and its crossings. The question, "Anything to declare?" sought to represent the authority of the border, the control; the question suggested that even though this was the most open border along the Iron Curtain, the border was still a real border.

The fates of the trips of many of us who frequently went "shopping across the border" revolved around the answer to that question. Doing the shopping "in Yugo", going for gas, to buy cigarettes, have entered the personal and family memory of the people from the northeastern border, and they are part of the collective memory of Trieste and Gorizia. Those memories and everyday rites are so rooted that, for shopping, even today people automatically tend to use the term "Yugo". For example, people say, "I am going to Yugo to get gas", even though, for everything else, people normally refer to Slovenia and Croatia.

In these memories, the rites are contrasted by the myths, which we all use to recall the people, places, things, of that near, yet unknown, world of the border. In this way, the gas, meat, cigarettes, alcohol, are also symbols in our memory; goods that were carried "on this side" of the border. The myths are, of course, small and personal: everyone challenged the imposed limits by "smuggling" an extra kilo of meat, a bottle of liquor, more packs of cigarettes; goods were always scattered in between the clothing, and in different parts of the car. Moreover, two to three people shopped together in order to be able to carry bigger quantities of goods.

METAPOLIS - Future City, a blog run by sociologist Gian Matteo Apuzzo , presents itself as a place of encounter, exchange, and the creation of ideas and projects on cities and their future. These pages talk of places, people, relations, words of cities and in the cities.

As well presented in Kinoatelje's documentary, EU-phoria, about the night of the final fall of the border, these myths and rites reemerged very clearly in the memories of the young or those less young. These were, as a matter of fact, the major recollections which characterized people's conversations while celebrating in the streets and on the borders last December: "Do you remember when we had to open the boxes of cigarettes and to stash the packs in our pockets or under the seat of the car?"

Relived internally, the border demonstrates even today how much for Trieste that reality was close and distant at the same time. There is no natural border; history has divided these lands, so that, at times, the signs of a border were insignificant, as the white border stones scattered here and there. Trieste folk who go running - celebrated by Mauro Covacich in his books - have also lived with the border; during races in the Kras, along the tracks that were so close to the border that crossing was only a few steps away. Along the tracks in the woods of Basovizza, Gropada, Padriciano, but also in many other footpaths in the Kras, the runners, or even simple visitors, ran frequently past signs indicating the border was only few meters away: "Attention, border at 100m", "...at 40m", "...at 10m".

Crossing the border was easy, but was not permitted. For example, the paths of Val Rosandra ran through the village of Bottazzo with a checkpoint and two small guard posts, one Yugoslav and one Italian, each guard post on one side of a small bridge over the stream. This place has celebrated an "open borders" day since 1981, when the fall of the wall, also the wall in these lands, was not yet foreseeable.

Crossing the border unintentionally on some track, being surprised by the Yugoslav milica, and being taken to the station in Koper for a security check, was an adventure lived by many, remembered as one of the myths of life along the border.

Also, the order Stoj (Stop), used so authoritatively by the police armed with machineguns, who surprised the accidental trespassers, has become so common that Trieste boys used it in their games.

Open border, closed border, with its symbols, secrets, passages, were becoming a part of your identity. For example, the prepusnica (pass), a document with which the border area residents could cross the border and move within a vast region (corresponding with former zone B). The prepusnica permitted crossing on local minor border checkpoints; those not considered international. For us, border folks, it was normal to take the local roads, but this route also helped us avoid the long lines of cars on busy days.

Belonging and distance, presence and detachment; these were elements which were lived simultaneously. Worlds in some ways distant, and yet close enough to "allow" the Italians to experience the short war for Slovenia's independence almost on their own skin. Is it possible to forget the sound blasts and the roaring of the Yugoslavian fighter planes coming all the way to the Gulf of Trieste, in order to manoeuvre and return? And, who can forget the stray bullets hitting the Italian barracks on the border, or the marks made by the tanks on the roads in the first years after the independence?

The war was so close and yet so distant, same as the border. Trieste felt the pain of the war but also frequently detached itself from the war. Then, a deep scar was left by the death of "its" three journalists, who worked for RAI, Marco Luchetta, Alessandro Ota e Dario D'Angelo, killed in Mostar by a shell on January 28 1994.

However, a fundamental difference exists between Trieste and Goriza in regards to "border places". For Gorizia, border stations were always urban spaces, closer and more integrated into the civic fabric, and thus a greater part of life and identity. In Trieste, they have always been periphery, places of transit or passing through, "islands" with their own spatial and professional organization, and where work was connected to the presence of the border, hence in some way "nobody's land". These places were void of identity and, at the same time, identical to other places; in modern parlance often called non-places. With their duty-free shops - another mark deeply ingrained in collective memory - they were a symbol of the transfer between different worlds.

For many years, in Trieste, the border was lived through other moments, such as, for example, the buses packed with shoppers from eastern and southeastern Europe who spread over the streets in the centre and invaded the shore and rested on the beaches. This was a ritual; they appeared at dawn on Saturday and departed late afternoon. Hundreds and hundreds of people were coming from Yugoslavia, but later also from Bulgaria and Romania, to buy what they could not find in their countries. For Trieste, the border also meant many jeans shops, many of them on the streets of Borgo Teresiano. They "monopolized" trade in the city and prevented the development of alternatives until after the era of poor shoppers from eastern and southeastern Europe.

Then, in just a few years, the jeans shops were replaced by Chinese shops, and the streets of Borgo Teresiano have become lit by red lanterns.

Now, the real issue of today is to become aware of a world that has changed and to adapt to modernity the ideas and the projects for the city's future. What would Trieste, once a city of the border, do then? It would be one of the myths characterizing the vision of its own residents of it own self? Actually, quite often for its residents, Trieste lives through its myths, the major and perhaps still most resilient, the myth of being a great city and a great harbour of a grand empire; the Austro-Hungarian empire.

Around here, history continues to be an element used to inspire the national and heroic spirit of the city, both in success as well as failure; but a city whose spirit continues to be stuck in its own reflection from the past. In a few weeks, great festivities will remind us of the 90 years since the great victory of 1918. The preparations indicate that the festivities will accent the celebration of irredentism and the Italian national sentiment of Trieste. This constitutes a natural aspect of the city, which in the historic events of the twentieth century strongly wanted to be a part of Italy, and thus very intensely feels this sentiment. The problem, however, is that memory is often used as an instrument in the relations of the present.

In Trieste, history has a problem being history. It is often a myth, quite often even a rite. If the past could actually produce history in this land, Trieste could make a step forward. And it could think, without fear, that it has always been a city of the border, with all the problems this brings but above all with the opportunities it creates. Leaving to history the tragic facts of the twentieth century does not mean denying them or underestimating them, but actually, facing them in their right dimension. In addition, for example, the tragic exodus of the people from Istria, from Rijeka or from Dalmatia, could receive the moral recognition by the entire Trieste. Or, the suffering of the different communities along the border, inflicted by different authoritarian regimes, could be recognised, and dealt with, without imposing past dramas on people living in the present.

However, Trieste often prefers to continue thinking of its myths. Moreover, while rhetorically accepting that the fall of the border opens the door for a new historic era for the city, the intangible borders are maintained and the minds perpetuate that contradictory "game" of close and distant worlds. Therefore, in this way, we witness the lack of cooperation between the ports, lack of cooperation between the Communes of Trieste and Koper, but also Trieste and Sežana (the only municipality bordering the Trieste municipality), the difficulties in making the city and the Kras rural communities to recognise linguistic and cultural plurality (symbolised in Boris Pahor's story).

Hence, in between the myths and the rites of the border, Trieste still has to find its new role, a dimension that would be different from just being a border of contrasts. Everybody has their own history, their own memories, but also their own everyday life that still produces closeness or distance. The border now has fallen and Trieste should find the strength to be a border city, which looks into the future, which knows how to transform personal stories into a collective history.