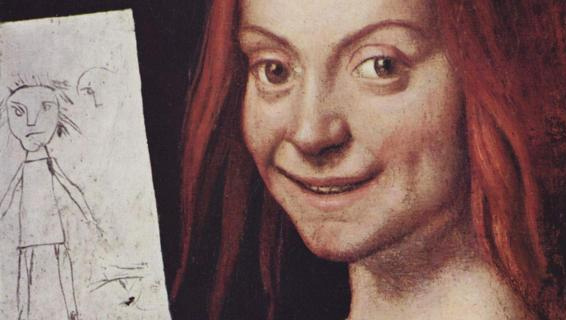 "Portrait of young man with children's drawings", by Giovanni Caroto

Almost a year since the theft of masterpieces by Mantegna, Rubens, Tintoretto and other masters from the Castelvecchio museum in Verona, and six months after their discovery in Ukraine, the paintings remain in Kiev

"The Holy Family with a Saint" by Andrea Mantegna, "Portrait of young man with children's drawings" by Francesco Caroto, "Lady of Licnidi" by Paul Rubens, five works by Jacopo Tintoretto, including the "Nursing Madonna" and "The transport of the ark of the covenant", plus another dozen paintings by Pisanello, de Jode, and Tintoretto's workshop.

Stolen a year ago from the Castelvecchio museum in Verona and found last May in the countryside around Odessa, the works have not yet returned to Italy. After six months of polite stalling, no one knows for sure when Ukraine will return them. In fact, it is not even clear where they are exactly. Paola Marini – at the time director of the Museum of Castelvecchio – told OBC Transeuropa that, when she visited Kiev on behalf of the Verona prosecution office, the paintings were in the residence of the President of Ukraine, Petro Poroshenko. However, Marini was later informed that the paintings had been transferred to the Eastern and Western art museum Bogdan Khanenko, where they allegedly remain. Nevertheless the Italian ambassador in Kiev did not respond to the request for confirmation.

Interviewed by OBC Transeuropa, the press office of President Poroshenko stated that the paintings "should return later this year. At the moment, we are negotiating a date that suits both parties".

These words sum up the paradox of the affair that is embarrassing the Italian authorities. "Those paintings are the corpus delicti, and those who keep them have no right to do that", told OBC Transeuropa prosecutor Gennaro Ottaviano, head of the investigations that led to their recovery.

The authority was informed of the discovery of the paintings only on May 11th, five days after the Ukrainian police found them – by the way, thanks to the information provided by the Italian investigators that had arrested some members of the gang. The letter of request for their return to Verona was sent on May 17th. "We had already scheduled the flight back for May 25th", commented Ottaviano. But it was not enough – Ukraine wanted an expert opinion, so Paola Marini flew to Kiev to recognise "her" paintings. "They were in a decent, but unadorned meeting room of the presidential palace", said the former director of the Castelvecchio museum.

Meanwhile, the letter of request has remained unanswered, although keeping stolen items is an actual crime. In Italy, this would be a matter for law enforcement, but in Ukraine it has become a diplomatic issue.

The negotiations between Renzi and Poroshenko

In June, the affair became paradoxical when the stolen paintings were exhibited at the Khanenko museum in Kiev. On that occasion, mayor of Verona Flavio Tosi, between reciprocal smiles and thanks, conferred the honorary citizenship to Poroshenko, inviting him to personally accompany the paintings back to their "home" in Castelvecchio. Poroshenko, however, seems to aim higher than meeting a mayor and is rumoured to be waiting for a state visit to deliver the paintings in the hands of Prime Minister Matteo Renzi. According to a statement released to OBC Transeuropa by the Bankova press office, the Ukrainian president is "negotiating a date", when all that international law requires is to put the paintings on a plane.

"I think it is time for the paintings to come home. I will personally call and, at the first opportunity, meet president Poroshenko", said Renzi during a visit to Verona in September. Renzi also said that, on an official occasion, Poroshenko had set November as a deadline. The statement made to OBC Transeuropa, on the other hand, moves the term to "later this year".

The longer this draws out, however, the more embarrassing for the Italian Government it becomes to welcome in full regalia those who have been refusing for months to return what is not theirs – which is a shame, because this could be a success story, one of those that started in the worst way, and yet ended well.

The story begins on the evening of November 19th, 2015, when three armed robbers enter the Castelvecchio museum in Verona just before closing time, pretend to immobilise the security guard and accomplice, and take 17 masterpieces selected from the collection. It continues with an unnecessary controversy on safety, as protecting an art gallery from the assault of robbers aided by a treacherous security guard is not that easy. It ends with the arrest of criminals and the recovery of all paitings, in good health, in less than six months – a success of the Italian investigators and the agents of the Protection of assets, who as early as March 16th were tracking a Moldovan gang, "ghosts, homeless people who change phone cards every week", in the words of prosecutor Ottaviano.

A few weeks later, with seven arrests in Italy and five in Moldova, the gang was routed. However, the paintings remained in possession of the last two fugitives, who had fled to Odessa. "We gave the Ukrainians all the details to find the paintings – who had them, who supported the fugitives, even the phone numbers", continues Ottaviano. Yet, the discovery was made months later, and only after Eurojust, the European Agency of Justice, rebuked the Ukrainian Prosecutor.

The feeling reported by the Italian authorities is that of dealing with a counterparty that is not exactly eager to collaborate. "My hands are tied, it is a political matter", confessed through his teeth Ukraine's General Prosecutor, effectively renouncing his role as head of the independent judiciary that responds to international law rather than political power. Three years after Maidan and the "revolution of dignity", Ukraine appears to be struggling with the tenets of democracy, including the separation of powers.

Meanwhile, in Italy, the robbers' trial has ended. The ruling is expected for December 5th.