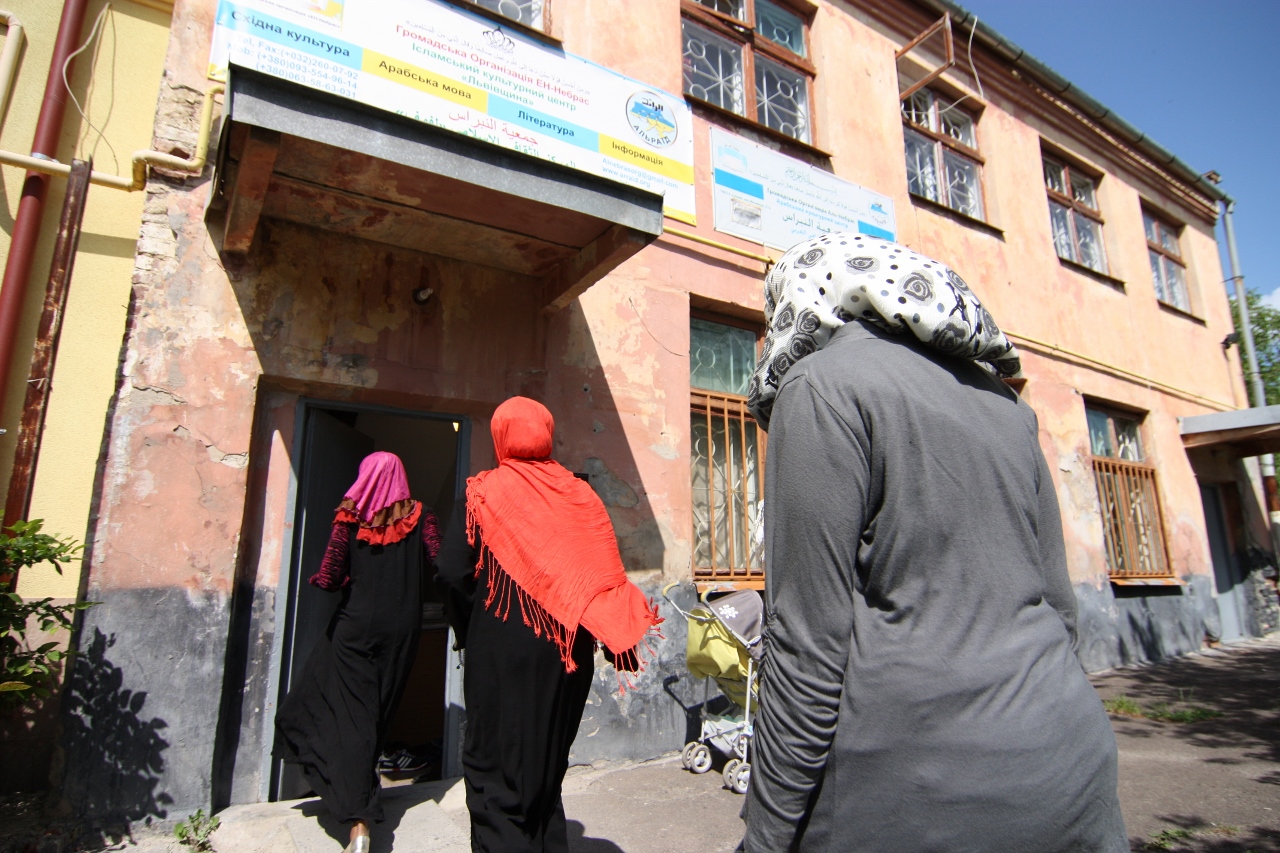 Thousands of Tatar families have left the Crimea after the annexation by Russia. The community, which has always been in favour of the union with Ukraine, feels now threatened by the new authorities. Many have found hospitality in Lviv

On Fridays at 3 pm you can find them in the shade of a linden tree in front of the prayer hall. It is still spring, but the sun is burning. They sit in a circle, waiting for the hour to come. Meanwhile, other believers arrive from the dormitories nearby. They are mostly young men. They come from Syria or Egypt to study medicine or technical subjects. A European degree is something you can show off in Damascus or Cairo. The Tatars, however, are not in Lviv to take a degree. They left their homeland, the Crimea, because they did not want to be part of Russia.

They started arriving even before the annexation because, they say, the wind had already begun to turn in the aftermath of Janukovič's escape, with the arrival of the Russian military. "We call them 'little green men', like the Martians, because they wear uniforms, but no badge. They are all Russians, they arrived from Russia, on trucks through the Strait of Kerch. We saw them with our own eyes". The man does not want his name to be written. His family is still there, he is afraid something bad might happen to them. In fact, everyone is afraid to talk, nobody wants to be photographed, showing a composed distrust of those who came to find them up here and start asking questions.

The Muslims of Lviv do not have a mosque yet. Until recently, they gathered in the room of a student house. Now they have opened a centre of Islamic culture nearby, where they set up a room for prayer. Synthetic carpets, a couple of copies of the Koran in Russian, a poster with the kaaba in Mecca, a stool that serves as mihrab, indicating the direction in which to pray. That is all.

A few minutes before the beginning of the prayer, the man I am waiting for walks unsteadily on the loose steps that make the entrance. Many get up, run to greet him as people do with someone venerable. He can hardly stand, he is given a chair immediately. Khan-Temir is not afraid to say his name, but before he can trust a stranger who has come here to ask questions, he starts asking them first.

"Too many times Russian journalists have written lies about us. Sometimes they seem to do everything to provoke us. We are tired, so we came to Lviv, far away from our land. You how did you find us? Why you are interested in our story? What are you going to write about us?".

A voice from inside the room says it is time. They start to come in, take off their shoes at the door, Khan-Temir dons a green skullcap, the colour of Islam, and goes in too. Here come the women, three. They go straight upstairs. On the threshold, Khan-Temir gives me an appointment for Sunday. "We will talk", and disappears into the twilight of the prayer hall.

Tatars have populated the Crimea for at least six centuries. According to the latest available data, there would be about 300,000 of them, 16% of the population, with peaks of 30% in the regions of Kerch, Simferopol, and Feodosia. They are the peninsula's third ethnic community after the Russians and the Ukrainians. In the aftermath of the Euromaidan revolution, when the settlement of the interim government in Kiev lit the fuse of Russian separatism, the Tatars immediately declared in favour of unity with Ukraine. Before the referendum, before the annexation, even before the appearance of the "little green men".

These people nurture an underlying distrust for Russia, a caution mixed with fear and suspicion that runs under the skin, historical. "Soviet authorities never recognised our national movement, they always saw it as anti-Soviet or extremist. The same thing is happening today", said Mustafa Džemilev, one of the historic leaders of the community. Discrimination reached its peak in 1944, when Soviet authorities deported to Central Asia 200,000 Crimean Tatars, leaving many to die during the long journey. Every year, on May 18th, the descendants of those who returned evoke that dark page in their history. A page that seems still open, somehow. Because many Tatars still associate too closely the Russian rule with Soviet oppression and deportations.

I meet Khan-Temir again in the center of Lviv, not far from the monument to Taras Shevchenko, Ukrainian poet and national hero. He is a poet too, but his verses have nothing patriotic. They are imbued with praises to Allah. "If we are here there must be a reason, and only God knows. I think he sent us far from home to spread his word. If I drop the spoon into this cup of tea, drops will splatter all over the table. The Russians are the spoon and we are like drops of tea".

Beyond fatalism, I am convinced that there is something else that led about 2,000 people to flee their homes overnight and look for a different place to live. On Friday, outside the prayer hall, others told me of intimidations by Russian soldiers. Knocking door to door, even at night, asking for documents with weapons in hand. Someone tells of passports torn, someone else says it is not true. "Yes, they came with machine guns. They threatened. They do not like Muslims, they made us understand that we were no longer welcome in the Crimea. Now they want those left to take Russian citizenship. Many others will go". It was then that the Khan-Temir gathered the family, loaded the car with everything that would fit, and drove a thousand miles, to the other end of the country.

In the lion's den

In a couple of months, between one and two thousand persons arrived in Lviv. Khan-Temir does not say it, but it is worth noticing that these descendants of the Turks, of Muslim faith and Russian language, found their refuge in Lviv, a stronghold of far-right party Svoboda and ultra-nationalist Pravy Sektor. The municipality has given many of them lodging, others have found hospitality in families.

"Yes, they welcomed us with open arms. Life is good here, people are helpful, the city is beautiful, we just miss our land where, inshallah, one day we will return". I say that I have met those of Pravy Sektor just before seeing him, their headquarters are a couple of blocks away. Khan-Temir shrugs: "we don't crossed our paths. I do not go to them, they do not come to me. I have no problem with those guys". Yet, Russian propaganda keeps telling of a Ukraine ravaged by neo-Nazi gangs; in the south-east of the country there is talk of a wave of Russian-phobic violence and someone from there even told me they would not feel safe coming here and speaking Russian. "That is nonsense. It is there that we now feel in danger, not here. Clearly comparisons with the 1944 deportations are out of place, but it is equally sad that, after seventy years, many of us are again forced to flee their homes".

Before leaving, Khan-Temir wants to give me a copy of his book of poems. There is one, the first, entitled On the volcano. Khan-Temir squints and recites a verse by heart: "I find it difficult now to stray from my way, and I'm just happy. Going forward in the name of Allah, my life will know no obstacles". He opens his eyes and smiles. "I wrote it fifteen years ago".