Crimea: the concerns of Nils Muižnieks 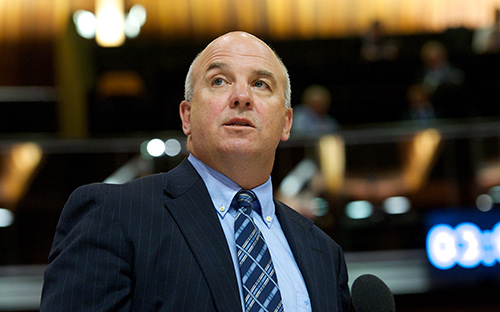 Council of Europe Commissioner for human rights Nils Muižnieks issued a report on his recent visit to Crimea. What emerges from the 15 pages of the document is a serious deterioration of human rights standards and protection after the annexation by Russia. According to the report, the Tatar ethnic minority and the ethnic Ukrainian population are particularly affected by the Russification process, but intimidations and persecutions also involve journalists and activists that are critical towards the new authorities.

You visited Crimea on September 10th-11th. Can you briefly summarize the overall human rights situation in the Peninsula?

I received very reliable information about two politically motivated killings, three disappearances at the time of my visit, and two more after my visit, for a total of five disappearances. These are quite serious cases, because they shocked the Crimean community. They are now being investigated by Russian authorities and I hope to see quick results.

You reported various cases of violations, but most serious violations hit ethnic minorities.

My primary concern was about the Crimean Tatars. Their population has had a very tragic history. Their religious organizations, their schools, their mosques, their businesses, the Mejlis have been damaged, raided, and searched. This is unnecessary, disproportionate, and sends a scary message to the Crimean Tatars.

Nevertheless, local authorities expressed their intention to improve the Tatar minority's situation and to investigate and prosecute those found responsible. Did they suggest any concrete action?

I talked to many members of the Mejlis who collaborate with the authorities – let's say, pro-government – and they mentioned that lots of investments in infrastructures, in housing, and cultural life are forthcoming, but I think that the heavy-handed pressure by the FSB on the legitimate leaders of the Tatar community in the Mejlis is a cause for great concern. There seems to be an attempt to divide and rule, but I think that this can only lead to greater human rights problems. I think that – despite of how much is invested in infrastructure and culture – having the religious leaders, the schools, the Mejlis searched in a very intimidating way can only send a huge signal of intimidation and fear to the whole community.

The report says that the majority of victims had expressed critical views of the events in Crimea after the annexation. This points to local authorities. Do you think a transparent prosecution of violations, in compliance with the case-law of the European court of human rights, will be possible in Crimea's current legal framework?

That’s a tough answer. If you ask Ukrainians, Crimea's legal framework is Ukrainian law; if you ask Russians, it is Russian law – but I think it’s clear that the Russians are in control now. I think that what is clear is that the European Convention on human rights still applies in Crimea. I think that the Russian authorities can show their goodwill by making accountable those who were involved in these politically motivated murders and disappearances. I will send a reassuring signal to the international as well as local community. I hope to see quick results.

The local head of the Ukrainian Orthodox Church said that several churches were taken away from them, while education in the Ukrainian language in schools has been vanishing. Moreover, there is the so-called “passportisation” issue. Can we talk about the “russification” of Crimea?

Russification is not really a human rights issue, but the pressures on ethnic and religious minorities are. I don’t think that parents feel comfortable and secure in expressing the desire to have their children educated in Ukrainian, and this is one of the reasons why Ukrainian language education has decreased – because parents are not demanding it. Yet, I would say a number of people have been attacked or harassed for speaking Ukrainian on streets; Ukrainian journalists and activists have also reported pressures and harassments. As regards “passportisation” – the automatic acquisition of Russian citizenship unless explicitly required otherwise – it is very difficult, if not impossible, for people who don’t want to become Russian citizens to make an informed decision on this issue. The legal consequences of taking or not taking Russian citizenship are very unclear.

There have been reports of attacks and intimidations against journalists. You reported that local authorities are aware of some cases, but expressed no intentions to take any action. Does this mean that media freedom is as a distant goal as ever?

What concerns me is not that some media outlets closed, but the intimidations against those still operating. The most common risk is the violations of the Russian law on “extremism”. This law is problematic in itself, because the definition of “extremism” is broad and vague. The space for critical journalism has shrunk, and any abuse that is not investigated sends a further alarming signal to other journalists.

You also mention the issue of self-defence forces.

I am very concerned about self-defence forces. Their functions are completely unclear, they are not regulated neither by Ukrainian nor by Russian law, and seem to have unlimited powers. I received a number of allegations about their involvement in cases of abduction and other serious violations of human rights. The issue is very serious. President Aksionov and local authorities stated that there is a problem with self-defence forces, but that they are an effective police force and will continue to work. I am convinced this is a big mistake.

Human rights organisations face many obstacles to enter Crimea. An exception was made for the Council of Europe.

As a Commissioner I’m in a relatively unique position, because my mandate is very flexible, and I think that both Russian and Ukrainian authorities understood this and that is why they let me in. But there are other bodies that are in a more difficult position. I hope that my visit will open the door for others, especially for the UN which has done some great work in Ukraine.

After this report, what is the next step? Any plan to visit Donbass?

The population of Crimea should not be left isolated and I think that regular international monitoring of the situation is absolutely essential. I will continue my dialogue with Ukrainian and Russian authorities, with ombudsmen of both sides, and promote better communication between them.

I intend to go back to Ukraine in December and, if security allows me, I would like to observe the human rights situation in the East.