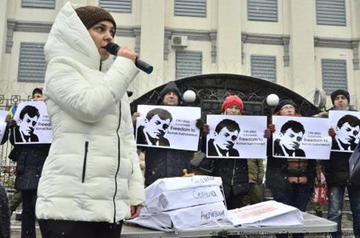 The author, a Crimean journalist, has requested that we publish this article anonymously.

In March 2014, after the referendum on Crimea’s “unification” with Russia that was not recognised beyond the latter’s borders, Ukrainian legislation was gradually squeezed out by Russian law. The official transition period was supposed to end on 1 January 2015, but there were exceptions in some areas. Free registration for Crimea’s media companies by Russian media watchdog Roskomnadzor was, for example, extended to 1 April of that year. Crimean media could effectively continue to function up until then, but many found their access to government bodies already closed and officials refusing to talk to them.

By 1 April, some Crimean print publications had successfully re-registered without any problems or bureaucratic delays, although admittedly they had all supported the referendum. Meanwhile, the editorial teams at major newspapers, internet platforms and TV channels that had worked in the peninsula for the previous year, but had a different perspective on the so-called “Crimean spring”, and were still desperately trying to get Russian licences — but trying in vain.

The exodus to Kyiv

A good example of this state of affairs is the case of ATR, Crimea’s first Tatar language TV channel, which had been operating since 2005. In February-March 2014 the channel covered events in the peninsula practically around the clock, giving representatives of all political groups the chance to air their views. ATR’s editorial policy was based on the interests of its core audience, Crimean Tatars, most of whom opposed the referendum and the presence on their territory of the euphemistically so-called “polite people” who were later unmasked as Russian troop formations. Within a few days, the channel achieved global fame as one of the main sources of objective information coming out of Crimea.

However, when ATR management sent four separate registration applications to Roskomnadzor, the government agency’s staff found an excuse to return them every time, so denying the channel registration. At midnight on 31 March 2015, ATR was forced to go off the air, to avoid breaking the law by broadcasting without a licence.

The channel’s founders decided to move to Kyiv, and resumed broadcasting two and a half months later from “mainland” Ukraine. Some members of the team were forced to leave Crimea. Journalists, camera operators, directors and other employees moved to the Ukrainian capital with their families. ATR has now been based in Kyiv for a year and a half, but its staff have more than once discussed the possibility of closing down or moving to an EU country: the channel receives no funding from the Ukrainian government.

It is no surprise to learn that ATR is owned by Lenur Islyamov, a Russian businessman of Crimean Tatar extraction who for a short time was acting prime minister of the Russian government of Crimea, though even that didn’t help the channel with its Roskomnadzor registration. Islyamov, who headed the food and energy blockade of the peninsula, is also now resident in Ukraine, and has been charged by Russia’s investigative organs with “public incitement to activity designed to breach the territorial integrity of the Russian Federation”.

A similar fate has befallen the popular Black Sea TV and Radio Company, owned by Crimean associates of Yulia Tymoshenko. After searches and the impoundment of its equipment, the channel could no longer continue to operate in Crimea and its owners took the decision to relocate to Kyiv.

Other well known Crimean internet platforms such as the Center for Journalistic Research, 15 Minutes, Crimea.Reality, Blackseanews, Events in Crimea and the Crimean Tatar-language “Qirim Haber Ajansi” have also moved to the Ukrainian capital, as have Crimea’s only Ukrainian-language newspaper Krymska Svetlitsa and its only Crimean Tatar-language radio station, Meydan. It must of course be said that the number and quality of articles about Crimea is noticeably affected by their being researched and written hundreds of kilometres from the peninsula.

Crimean editorial teams in Kyiv are unable to get accreditation for journalists inside the “Russian” republic and can’t guarantee their safety in Crimea. Other media outlets are in an even worse situation. The popular Crimean weeklies Republic and Events, once printed in their thousands, have had to fold, as have the much-loved Leader and Assol radio stations.

The harassment of those who remain

Dozens of well-known journalists have left Crimea after two and a half years of moral and physical pressure.

Many now live and work in Kyiv, and some have brought their families, afraid to leave them behind. Some have even left their profession to avoid risking their lives. Those who have decided to continue their independent journalism in the peninsula, despite their fears, have been subject to unprecedented levels of harassment from the security services, and they face continual searches of their homes, arrests, interrogations, “invitations” for chats with the police, the Prosecutor’s Office, the Investigative Committee and the FSB.

The security services in “Russian Crimea” have opened three criminal cases of “public incitement to activity designed to subvert the territorial integrity of the Russian Federation”. Andrey Klimenko, editor-in-chief of the “Blackseanews” online platform, the journalist Anna Andriyevskaya and RFE/RL's freelance Crimean correspondent Nikolai Semena are the targets.

At various times, material published under their names or pseudonyms has been seen by the Russian security services as incitement to separatism.

Two of them have managed to escape actual prosecution by settling in Kyiv, but Nikolai Semena is still on the peninsula. He has been banned from leaving Crimea and is held under house arrest. Semena is also registered on the Russian Federation’s list of people allegedly connected with terrorism and extremism. In addition, he has only limited access to his bank accounts.

The Crimean authorities openly refer to Semena and his colleagues as “enemies of the republic” and “agents of the CIA and the State Department”. “I know these people well,” the Crimean parliament’s speaker Vladimir Konstantinov announced after criminal charges were filed against Semena. “They are our enemies. They are enemies of Russia, enemies of Crimea. And whatever they write, they have only one aim — to hurt us and bring us down.”

Registering with Roskomnadzor is far from a guarantee of safety from prosecution. At the start of October, the Investigative Committee brought a criminal case against Aleksey Nazimov, the founder and editor of Your paper, a weekly published in the resort town of Alushta. Nazimov, who is known for his opposition to the local authorities, is alleged to have blackmailed a local politician over information that would have tarnished the latter’s reputation. A court in Alushta has placed Nazimov in detention for two months (link in Russian).