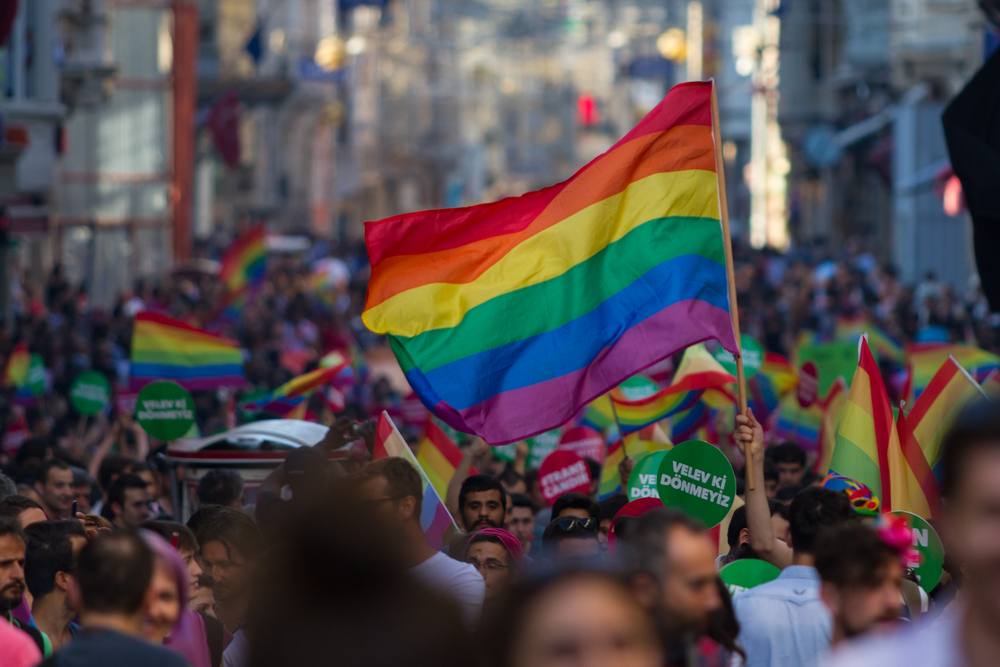 A picture of the last "free" Pride in Istanbul, in 2014 - © EvrenKalinbacak/Shutterstock

Istanbul celebrated its annual LGBTI+ Pride March in late June under the shadow of intense police repression, in line with Turkish government’s growing intolerance for any form of LGBTI+ expression, from public marches to popular media

Thousands of LGBTI+ people gathered in Istanbul’s historic Taksim district for the city’s 20th Pride March on June 25. All events related to the march and Pride Week were banned by district and city governors. Roads and metro stops leading to the area were closed while riot police filled the district. Even several cafe-goers who were sitting in the area before the march began were either removed or taken into custody. Many, including members of the press like AFP photojournalist Bulent Kilic, reported being physically roughed off by the police. Despite this, a massive crowd of undaunted activists gathered in defiance of the heavy repression.

A shocking total of 373 people were taken into police custody during the march. They spent hours without food or water before being released on the morning of June 26. Between 2015 and 2021, a total of 103 people had been taken into custody. Over the last decade, the only event with a similar tally was the Newroz festivities in the Kurdish-majority city of Diyarbakir earlier this year, with 298 people taken into custody.

While Turkey has been cracking down on most types of protests and public gatherings since the Gezi Park protests of 2013, during which over 100,000 people attended the Istanbul Pride March, and the attempted coup of 2016, the state’s approach to the LGBTI+ movement has been particularly brutal.

As protesters in Istanbul attempted to dodge police and push past barricades, small groups of organisers attempted to read out the official Istanbul Pride press statement on this year’s theme of “Resistance.” The topics it touched on reveal why the government sees the LGBTI+ movement as a threat.

The statement references high-profile civil society activists like Mucella Yapici and Osman Kavala, imprisoned during the recent Gezi Park trial, and expresses solidarity with the Kurdish movement and refugees. It also demands the re-reinstatement of the Istanbul Convention designed to prevent violence against women and children, a major demand of Turkey’s equally militant and intersectional feminist movement .

Turkey is second last among European countries in terms of LGBTI+ rights according to a 2022 report by the International Lesbian, Gay, Bisexual, Trans and Intersex Association. Homophobic language is used at the highest levels of the state, with President Recep Tayyip Erdogan saying “There is no such thing as LGBT” and Interior Minister Suleyman Soylu using phrases like “LGBT perverts” and describing LGBTI+ people as part of a terrorist organisation. Even possession of rainbow flags has been treated as evidence of a crime despite no law against homosexuality.

Despite the odds, the LGBTI+ movement in Turkey continues to organise across the country. On July 3, police attacked the Pride March in the Anatolian college town of Eskisehir, taking ten people into custody. Back in May, an Islamist group began distributing pamphlets in Eskişehir province calling for gay people to be burnt alive.

On July 5, the Ankara Pride Committee went ahead with its march despite threats from homophobic groups. Melih Guner, youth branch chair of the extremist Yeniden Refah Partisi, claimed on Twitter that the Ankara governor called him personally to assure him that the march would not be allowed to go on .

The state has also been targeting LGBTI+ media representation. For example, Turkey’s Radio and Television Supreme Council already tightly controls what can be shown on television, but in 2020 it also pressured Netflix to edit out a gay character from one of its original Turkish-language series . The team decided to cancel the show mid-shoot rather than modify the script.

On July 1, while Pride events were continuing across Turkey, the media watchdog targeted pop singer Mabel Matiz for a music video alluding to a romantic relationship between two men. The Radio and Television Supreme Council (RTUK) called the major channels to urge them not to air Matiz’s latest song “Karakol” (or Police Station), the council’s opposition member Ilhan Tasci announced on Twitter. Though they were unable to outright ban the song, the pro-government council members implied that channels which ignored this de facto ban could be fined. Meanwhile, a social media hashtag urged Matiz, who is known as an outspoken defender of LGBTI+ rights, to “know his place.”

Responding to the ban on Matiz’s song, prominent LGBTI+ news portal Kaos GL Foundation issued a statement : “While 10 LGBTI+ events have been banned in one month and 530 LGBTI+ activists have been taken into custody, the song and music video for Mabel’s ‘Karakol’ is like a carnation opening in spite of this spiral of hate and violence… Bans, censorship, and hate campaigns cannot silence our songs”.

While the Turkish government escalates its war against LGBTI+ people, the community shows no signs of backing down.