LGBT in Turkey: they are our children 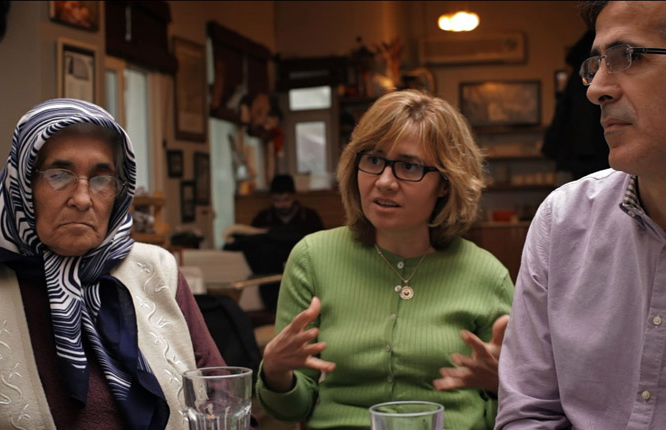 A shot from the movie "My Child", by Can Candan

A documentary movie gives voice to the families of lesbians, bisexuals and transexuals in Turkey. “My child” is an intense work, gaining increasing attention. We met its director, Can Candan

“My daughter is transsexual, I come from Adana”. The young woman in one of the front rows in the Istanbul cinema, Fitaş, manages only these few words before bursting into tears. “Ever since my daughter, now an activist with Lgbt, told me of her situation, our life has been very hard, but I decided to stay at her side, although, without meeting parents like those shown in this film, I would never have coped.”

At the end of the film, Benim cocuğum, My Child, the documentary by Can Candan which gives voice to the activists of Listag, the association of the families of lesbians, bisexuals and trans, the microphone is passed from hand to hand in the crowded room: all have something to say and for many, being able to speak for the first time in public about their own experience as parents, is a liberation.

“The decision to make this documentary resulted from an encounter. In October 2010 I met the families of the association Listag at a Conference at the University of the Bosphorous where they were recounting their experience. I was in the audience and these people's stories affected me deeply”, the director Can Candan tells OBC, “their words made me think of my relationship with my parents and also with my son, and of what it means to fight, particularly in a society like this one, against homophobia and transphobia. At the end of the meeting I introduced myself and proposed making a film together with the families – their immediate response was positive because they already had a similar project in mind, having seen a film about an association of parents of Lgbt people, l'Agedo, while on a trip to Italy two years ago, and it had made a great impression on them. Working together was easy right from the outset because the families were ready to talk about themselves.”

The trailer of My child

The purpose of the documentary, shown for the first time last month during the Istanbul International Festival of Independent Cinema in more than 32 towns and seen by 2,100 people in a single week, is to put the audience and Turkish society face to face with their own prejudices.

“My film was very well received by the public” Candan explains, “people are affected strongly and ask themselves what it means to be a man or a woman and about their own gender identity. There are those who say they will never look at society with the same eyes again, those who realise their own homophobia or transphobia and some who have even decided to come out, taking their own parents to see the film.” 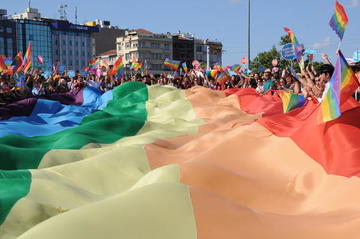 Go to the photo gallery

Even if the media and public opinion are now more open than in the past to discussion about the conditions of homosexuals, bisexuals and trans, the director thinks there is still a long way to go: “Civil rights are on the agenda as they never were before and this is the result of decades of battles on the part of the Lgbt associations, battles which this documentary and the work of Listag are only part of. This gives us hope, although we mustn't forget that every day Lgbt people are being attacked, insulted and discriminated against.”

No rights, no safeguards

Although ther are no laws forbidding homosexual relations in Turkey, the parliamentary members of Recep Tayyip Erdoğan's conservative Party for Justice and Development, in power since 2002, have till now opposed any law in favour of Lgbt people's rights and which would punish crimes of a homophobic origin. In May a proposal presented by the pro-Kurdish Party for Democracy and Peace and supported by the main opposition movement, the People's Republican Party, to insert into the new constitution a law banning every kind of discrimination on the basis of sexual orientation was not passed due to Erdoğan's party's vote against it.

In recent years many victims of homophobic violence have been killed by a parent or relative because they were gay. Among these were Ahmet Yıldız, shot with a pistol by his father in a cafe on the Bosphorus, July 15th 2008, and the seventeen-year old R.A. killed last July in Diyarbakir by his father and uncle who had discovered he was gay. But transexuals are the main victims of homophobic violence: on March 10th Seda, a young transexual, found two days previously in a bad condition in the Avcılar quarter of Istanbul, died in hospital. In 2012 alone five transexuals were killed.

In Turkey people may die because of homophobia and transphobia, but they may also be kidnapped for their sexual orientation. February 23rd Umut Göktuğ Söyler was kidnapped in Ankara by his father, a professional soldier, and his policeman uncle who, after discovering the youth living with his companion, broke down the door of their house, threatened them both with a pistol, beat the friend and took him away. Despite Söyler's request to the police for protection two weeks previously, no-one had taken up his complaint and, nearly a month since his disappearance, the magistrates still have not called for the father's arrest, nor has anything been heard of the youth.

To counter episodes like this and to improve the living conditions of homosexuals, bisexuals and transexuals in Turkey, a group of associations which over time is increasingly taking root even outside the larger cities, and, apart from the older associations like Labda in Istanbul and Kaos GL in Ankara, new, important phenomena are developing such as the association Hebun in Diyarbakir, Pembe Hayat, the first Ngo in Ankara to defend transexuals' rights and Spod, a research group on social policy, gender identity and sexual orientation in Istanbul.

The choice to work for the rights of Lgbt people is explained like this by one of the mothers in the association Listag: “Every day we read accounts in the newspapers of violent episodes against homosexuals and trans. Many people read about it and turn the page, whereas we see each one as our son or daughter and feel a stab in our heart every time we hear about things of this kind.”