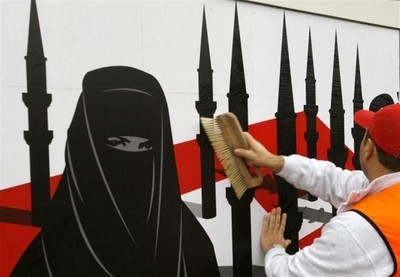 There has been a strong reaction in both Turkey and Switzerland to the Swiss vote banning the construction of new minarets in the Confederation. A look at the significance of the referendum for migrant workers, the views of political parties and institutions such as “the House of the People” in Zurich, and the public debate

“An expression of Islamophobia” and a “symptom of the growing racist and ultra-nationalist movements in Europe”. This is how the result of the 29 November Swiss referendum - in which 57.5 percent of voters opted in favor of a ban on building new minarets on Swiss territory - was interpreted in Turkey. In Switzerland, where 400,000 Muslim migrants (most of them from the countries of the former Yugoslavia and Turkey) live at present, there are currently four minarets. By passing the referendum, Swiss voters accepted the proposal from the nationalist People’s Party, Democratic Union of the Center (UDC) and the Christian right-wing Federal Democratic Union (UDF), which bans the construction of new ones.

Turkish institutions and political parties, including the opposition, have condemned the decision. President Gül and Prime Minister Erdogan stressed it was “very wrong to put to referendum an issue which concerns freedom and fundamental rights”.

Erdogan criticized the explanation of Swiss Minister of Justice Eveline Widmer-Schlumpf, who said the ban is aimed at Islamic extremism and not at Muslims. “What connection can the minaret possibly have with extremism? Making such a connection is dangerous and unacceptable”, said Erdogan, defining “Islamophobia as a crime against humanity equal to anti-Semitism”, and inviting the countries of the European Union, the European Court of Human Rights, and all pertinent institutions to “demonstrate sensitivity in view of the issue and not allow the world and Europe to be dragged into a situation of tension.”

Ankara asked Switzerland, a country defined as “known internationally for its traditional support for dialogue and respect for diversity”, to “correct this error as soon as possible.” The Turkish public welcomed statements from the President of the Federal Council, the Radical Democrats, Erika Forster Vannini apologizing to Muslims and promising the law would be repealed. Turkey also welcomed a statement from Foreign Minister Micheline Calmy-Rey, who said she was “shocked” by the outcome of the referendum. Turkey also viewed positively the vows from the Greens and other political parties to support the Muslim Association's proposal to raise the issue before the European Court of Human Rights.


Cohn-Bendit, leader of the Greens in the European Parliament, proposed that rich Muslims withdraw their money from Swiss banks in sign of protest. Egeman Bagis, negotiator in the Turkish accession talks with the EU, accepted the proposal and suggested the money be transferred to Turkish banks.

The Turkish press dedicated a lot of space to the motivations and the possible consequences of the Swiss referendum. Turkish media have also followed comments in the international press and underlined that, in most cases, the international commentaries criticized the referendum outcome. One of the critical points emphasized in the debate concerns the economic consequences of the decision for Switzerland.

In an editorial entitled “The minaret ban will cost Switzerland a lot”, the Turkish newspaper Today's Zaman cites Swiss news that economists from the alpine country are opposed to the ban. Considering Switzerland's important economic ties with Muslim countries, above all in this moment of global economic difficulty, the losses would impact the banking sector, tourism – Muslim tourists account for five percent of total revenue in this sector - and exports, seven percent of total revenue.

According to 2007 data, Switzerland exported goods totaling 1.65 billion Euros to Turkey, with exports to the Arab Emirates and Saudi Arabia not far behind. In addition, in 2008, Pakistan appears to have been the prime recipient of Swiss military exports.

The Washington Post reported that, in Muslim countries, there are those who, half in joke and half seriously, propose a boycott of Swiss chocolates. “A call to economic boycott of Swiss products, both in Turkey as well as in other Muslim countries, would be taken absolutely seriously”, says Mahmut Çelikus, president of the Association of Turkish Merchants and Artisans. The Association sent a letter expressing its disappointment with the referendum to the Swiss Embassy in Ankara .

Taha Akyol, a columnist with the Turkish daily Milliyet, explained the vote in terms of “the problem of identity now present in all European countries”, stressing the importance of the fact that the referendum was called by the extreme right and not by the Christian church, which opposed the ban.


“The extremists used the image of spearing minarets as nails in the Swiss flag, and images of women wearing the chador! They must have learned Hitler’s lessons well in order to use the Nazi's color scheme in their campaign!” wrote Akyol, adding that “the propagandistic campaign depicts Islam and Muslims in a certain way, but as was also written in Frankfurter Allgemeine, Muslims, who make up five percent of the Swiss population, are perfectly integrated in the country. The reason the ban has gained such support has been stressed by The Independent: it is religious and racial intolerance.” Kerim Isbilir, a human rights activist and member of the association “House of the People” in Zurich, provided a different perspective on the importance of the vote in an interview with BIA-net. According to Isbilir, the discussion of minarets is a way to cover up the real problems of foreign workers, whose rights in this period have progressively eroded. According to Isbilir, immigrants are not paid the same as domestic workers for the same amount of work and do not receive some entitlements such as paid annual holiday, which decreased from 28 to 10 days. State subsidies for education have been reduced, Switzerland has imposed an obligatory knowledge of German for family reunions, and the police can exercise the power to hold an immigrant suspect in detention for the entire duration of the inquiry. According to the activist, the real result of the referendum will be to push Muslim workers into ever-greater reliance on their traditions, isolating them inside their communities and further distancing them from the fight for labor and social rights.