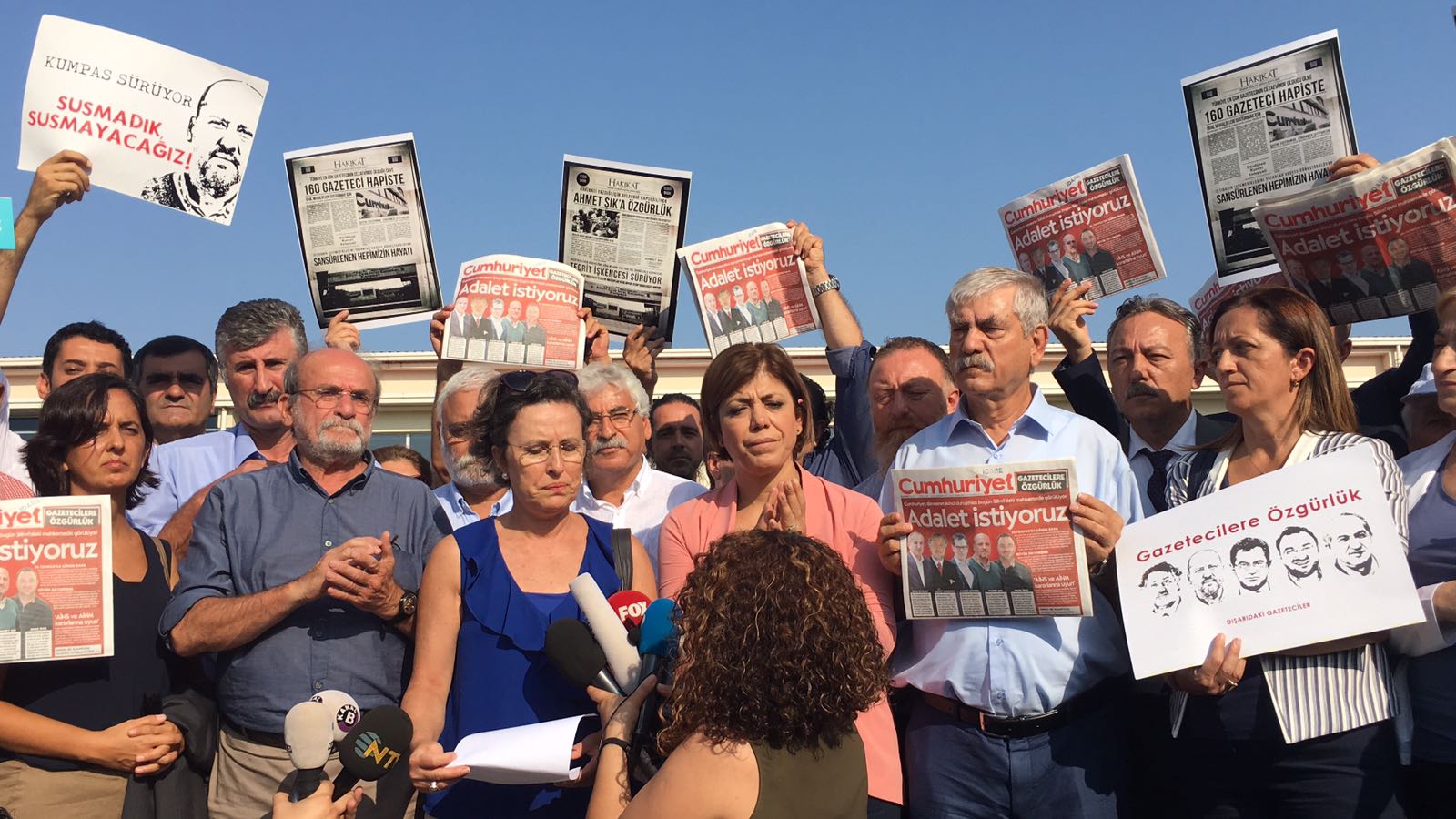 Demonstration in support of Cumhuriyet in front of the court

The trial resumes in Istanbul for the employees of daily Cumhuriyet, accused of terrorism. Defendants remain behind bars at the request of the prosecution. Our correspondent's account

All ten defendants of the Cumhuriyet trial remain behind bars. They are accused of supporting armed terrorist organisations without being effective members of them, and of creating and managing a terrorist organisation. Other seven people involved in the trial are free, waiting for judgment. The prosecutor has called for up to 43 years of imprisonment pending the next hearing, scheduled for September 25th, and for confirming the imprisonment of ten defendants, citing the risk of evidence tampering.

At the end of the hearing of Monday, September 11th, and after a long council, judges decided to uphold the demands of the prosecution.

The debate in the courtroom

The interrogations conducted throughout the day focused on the three theorems on which the allegations are based. According to the prosecution, all alleged crimes were committed to support the goals of Fetö (the network of Fetullah Gülen), PYD (Kurdish forces in northern Syria), and PKK (the armed organisation of the Kurdish Autonomous Movement), regarded by Ankara as subversive and terrorist organisations. 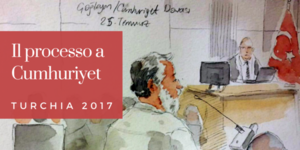 On Monday, July 24th, the trial began for 17 journalists of Cumhuriyet, a historic opposition newspaper accused by Turkish judicial authorities to support terrorist activities. After the attempted coup in the summer of 2016, the country's media experience increasing pressure. Cumhuriyet's journalists are neither the first nor the only ones to have known prison, but this trial is nonetheless symbolic, because it tells the international community about the regression of a EU formal candidate country, which threatens the very foundations of freedom of expression. In this dossier , materials (in Italian) to learn more about the whole story.

According to prosecutors, the foundation supporting Cumhuriyet manipulated both its editorial line and the elections of the editorial board; defendants used the "Bylock" smartphone application for communications with alleged members of these organisations; titles and articles published on the newspaper were intended to support the terrorist message, manipulate public perception, and hinder some ongoing investigations.

"I only ask for a fair trial", said Kadri Gürsel, a newspaper advisor accused of manipulating the editorial board. His defense lawyer insisted on pointing out that Gürsel, who has been with Cumhuriyet for a few months as an external consultant, did not have any decision-making power. "The allegations that this paper has supported Fetö are disturbing. Especially when they come from a government that offered that organisation a safe harbour for years". The lawyer also recalled how decisions taken by the newspaper's foundation are still undergoing administrative proceedings.

The defense, therefore, claims that a criminal court has no jurisdiction in this matter and that, in any case, a fact not yet proven by administrative justice cannot be used for accusation by the prosecution.

"Supporting a terrorist organisation is an interpretable accusation: one thing is to provide shelter, weapons, or food; another is to express an abstract support to the cause". While the defense sees a substantial difference between the two, the prosecution interprets them as offenses of equal gravity.

Attorney Bahri Belen also found that, by accusing all the staff for the activity of a newspaper, the prosecutor is violating the principle of individual responsibility, "although all those who have long been with Cumhuriyet have recalled that the board of the foundation has no say in the editorial content of the newspaper".

The prosecutor has built up a large part of the charges on the "Bylock" smartphone application. More generally, across the country, the presence of traces of this application is considered by the police and judicial authorities as sufficient evidence to incriminate suspects, despite the fact that the Constitutional Court ruled otherwise, deeming the presence of "Bylock" on a phone as inadequate evidence to establish guilt, while content should be examined instead.

Gürsel's lawyer argued that "my client has never replied to 102 out of 112 incriminated communications. The other 10 were exchanged with other journalists, which is part of the profession, when Gürsel was not even employed at Cumhuriyet". And "in order to be accused of corresponding via 'Bylock', a person must have been in possession of the unique code for secret communication. Furthermore, the contents must be examined".

Basically, the defense argues that receiving texts or phone calls on "Bylock" – sometimes without even replying – cannot be interpreted as being affiliated to any organisation. "Can you know whether the call or text was sent from the application? Experts say no".

Ahmet Şık, on the other hand, has rejected all allegations of using the application in the first place: "Attorneys showed me a list of alleged 'Bylock' users, claiming that I had contacts with them. That is not the case. They threatened to arrest me, and I said, go ahead".

The defense also complained about the incorrect move of the prosecution, that submitted new technical documentation only on Friday, few days before the hearing, making it impossible for lawyers to prepare.

The alleged presence of the app on the phones of defendants has been the subject of extensive technical debate and is the main reason why judges postponed the trial to September 25th without releasing the defendants. Judges have, in the meantime, requested new technical expertise.

Journalism on the stand

The political nature of the trial is most evident in the use of journalistic sources. On the one hand, newspaper articles and titles are referred to as evidence of terrorist affiliation.

Aykut Küçükkaya, a journalist called to testify, stated that "according to publishing criteria, as long as a story is true, it deserves to find space in the newspaper; and if some of the colleagues are not satisfied with it, they are free to express their criticisms. But titles are created by a different unit, whether the journalist likes it or not. Accusing a reporter for the title of an article is, therefore, nonsense".

Ahmet Şık also had to defend himself against new accusations, filed last Friday for an article that, according to the prosecution, aided the misdirection of investigations into the murder of Russian ambassador Andrey Karlov in Ankara. In his piece, the journalist argued that jihadist infiltration into the police is a viable thesis, while official investigations point firmly to Fetö/ PYD.

On the other hand, articles of newspapers close to the government are cited as evidence in the indictment. According to the defense, long sections of the indictment have already been anticipated by newspapers such as Sabah, and if these stories are used as evidence, they can be found both in court documents and in newspaper pages. So how could defendants, if released, tamper with evidence?

"But the real question is", asks lawyer Fikret Ilkiz in his conclusions, "how is it possible for a newspaper to support terrorism through its stories; how can you be a member of a terrorist organisation through a publication?".

"The prosecutor is bringing a newspaper to court, forcing us to debate whether journalism can be considered terrorist propaganda or not", Ilkiz concluded. "You may not approve the decisions of the European Court of Human Rights on the Şık case, you may not like him as a person, but you cannot ignore the decisions of the Court on freedom of the press. The Venice Commission clearly stated that a debate resulting from anti-terrorist laws that leads to frame media activity as support for terrorism must be considered deeply wrong".

On Monday, July 24th, the trial began for 17 journalists of Cumhuriyet, a historic opposition newspaper accused by Turkish judicial authorities to support terrorist activities. After the attempted coup in the summer of 2016, the country's media experience increasing pressure. Cumhuriyet's journalists are neither the first nor the only ones to have known prison, but this trial is nonetheless symbolic, because it tells the international community about the regression of a EU formal candidate country, which threatens the very foundations of freedom of expression. In this dossier , materials (in Italian) to learn more about the whole story.