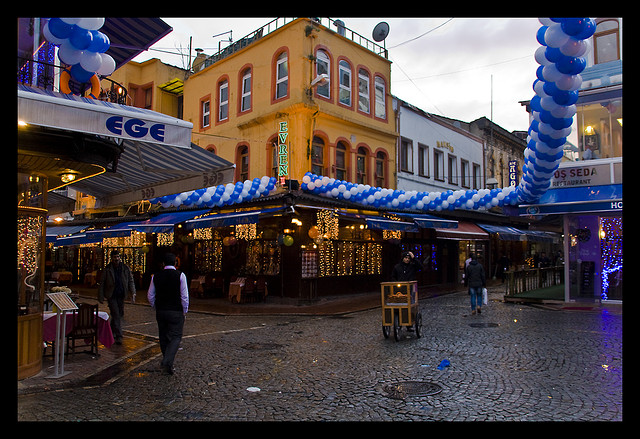 Unofficial data state that between 10 and 20.000 Armenian immigrants work in Turkey illegally. The majority of them are women. Their children have no documents and are not granted the right to education. Our report

Istanbul, the courtyard of the Armenian Church of Surp Hovhannes. Every evening, the coming and going of people intensifies with the setting of the sun. Young Armenian women, immigrant workers, take turns in taking their children home after school, an elementary school in the basement of the church. It is an illegal school, attended by 105 children: most of them do not hold an identity card, as they were born in Turkey from parents without a residence permit. This phenomenon affects around 1.000 children across Turkey and is one of the most serious problems for those Armenian immigrants who are “illegal”.

Unofficial reports state that between 10 and 20.000 Armenian immigrants work in Turkey without the required permits. The majority of them are women. The difficult economic situation encountered in Armenia has lead them abroad to seek work. For the vast number of different opportunities it offers, Istanbul has become the main destination for most of these women. They have found a job in factories, textile workshops, or in trade between the two Countries. The majority of them, however, work in households as cleaners, caregivers for the elderly and the ill or baby-sitters.

The men, on the other hand, are very often unemployed: for them, the main occupation is that of taking care of their families so that nothing bad happens to them. Some Armenian immigrants, though, work for the Grand Bazaar goldsmiths or as shoemakers in the Gedikpaşa workshops. It is so for A. ‘We are here to work. Why would I be here if there were work in Armenia?’ In just a few words, the man – who prefers his identity be kept secret – tells the reason why he is in Istanbul with his wife and daughter. A. points out, however, that he has really nothing to complain about.

One of the headmistresses of Surp Hovhannes elementary school, states: ‘I have three children and we could not live off my teaching salary in Armenia’. A graduate, like so many other women who decided to leave their Country. ‘We have been living in Istanbul for 7 years. For a few months at the beginning, before working at the school, I was a caregiver. I had to quit, though, because it was troubling for me not to be treated equally’.

The Armenian immigrants live mainly in Kumkapı, one of the historical quarters of the Armenians “native” of Istanbul, whose community counts 60.000 people. Here, the cheap and not very decent “rooms for singles”, a few years ago intended for migrants coming from Anatolia, have in time become lodgings for migrants coming from abroad. Many of them share small spaces with various people.

‘I’ve been here since 2002. I live with my husband, my daughter and my mother-in-law. When we first came here, it was not easy to find a home. We were lucky, because my mother-in-law was already here. Now, there is word-of-mouth for available rooms starting from the bus station’, Y. tells us. Her daughter is in sixth grade.

The station Y. is talking about is Emniyet Otogar, where there are buses between Istanbul and Yerevan once a week. Since the border between Turkey and Armenia is shut, the trip goes through Georgia. It takes at least 36 hours, to arrive. The round trip costs 100 Dollars. A real deal, compared to the 750-Dollar ticket to fly from Yerevan to Istanbul.

Why Turkey? Many immigrants give the same answer: ‘It’s the closest destination, it has a local Armenian population and it’s easier than Ukraine and Russia to enter for the first time. You only need a tourist visa that you can buy at the border. It’s only 15 Dollars and it’s valid for one month’.

Once in Turkey, though, problems begin. Indeed, if there is work, it is always illicit and undeclared. Until last February, a foreigner could renew his tourist visa by exiting Turkish soil for one day only. Now, the new law combating immigrants’ irregular work states that after 3 months in Turkey, the “tourist” must leave and cannot re-enter the Country before 90 days have gone by.

If for many immigrants exiting Turkey every month was out of the question, it all becomes more difficult with wages ranging from 550 to 800 Dollars. And the outlook of employers regularly hiring and paying the 780 Dollars required by law remains a chimera. Indeed, nothing seems to have concretely changed in the lives of those affected: ‘We keep living with the fear of the visa and deportation’, M. worriedly tells us.

R. has a different point of view: two years ago, she caught up with her husband and mother-in-law (both having regular residence permits) and according to her, ‘the police know how to tell people apart. They don’t do anything to good people who work’. Her husband has undergone three surgeries and has the right to be admitted to Turkish hospitals. Those who are “illegal”, instead, are admitted to the Surp Pırgiç hospital of the Armenian community in Istanbul.

R.’s biggest hurt, however, is not being able to see her parents. Her mother has come to visit them, but her youngest daughter of 1 has never met her grandparents. ‘If we went, it would not be so easy to come back….’ Those who are spot at the border’s exit can only re-enter by paying a 15-Dollar fine for each day spent illegally in the Country, or by accepting not to enter Turkey again for 5 years. ‘All my relatives are in Armenia’, S. tells. ‘If there isn’t a wedding or a funeral, we can’t move from here and this hurts us a lot. We are not even comforted by the fact that we can send money home’.

Children with no documents

It is the youngest, however, who are most penalized by this situation. When an “illegal” couple of Armenian immigrants bears a child in Turkey, it cannot apply for citizenship for the newborn. The lack of diplomatic relations between Ankara and Yerevan, moreover, makes everything even more complicated. The child cannot obtain a passport if not by going to Armenia. Without any identification, though, the child cannot cross the border. ‘My daughter can’t envisage Armenia, when I tell her about it. For her, it’s a very distant reality’, another immigrant tells us. It is a dog biting its own tail. But it is not over.

The tangle of prohibitions and difficulties negatively affects the right of children to education. Children of Armenian immigrants, with an Armenian passport or without identity documents, cannot attend Turkish public schools. Starting from last year, a provision has granted these children to enroll in the 17 schools of the local Armenian communities as “guests”, meaning they can attend classes without having any degree issued and recognized on a national level.

Few children have enrolled, this year. According to the interviewees, this is because the families run the risk of being exposed and also because, even though it is in Armenian schools, the educational curriculum is completely tailored to the Turkish curriculum and makes no reference to the Armenian people and its history. This would in no way allow the children to settle in the Armenian schools, should they ever go back. Then, there is the language issue: Eastern Armenian (spoken in Armenia) is indeed different from that used in Turkey.

For ten years, the Surp Hovhannes elementary school has been trying to remedy this difficult situation while Turkish authorities, given the lack of valid alternatives, turn a blind eye to its “illegality”. Six classes managed by seven voluntary teachers follow the Armenian schools’ curriculum.

‘At the beginning there were only seven children. Now, there are over a hundred, including those in kindergarten. This year, we have managed to open the sixth class as well, but for next year there is no more room’, one of the school’s headmistresses explains.

Various joint initiatives are what is keeping the school alive: ‘The church provides the space and pays all the bills. Since the third year, the Caritas has supplied meals for the children and given us two cleaners, so we don’t have to take care of that too. The Ministry for the Armenian Diaspora provides the books. Last year, the city of Bakırköy organized sports activities for the children, and supplied buses to attend them. Once it also paid for dentist appointments’.

Where are the children going to go when there is no more room? ‘Two friends of mine have gone back to Armenia to live with their grandparents’, say N., 12 years-old. ‘Two other friends started attending the local Armenian schools, but they say everything is different from here’.

The Mother is still uncertain on what to do. She only seems sure about one thing: ‘One day, even when we get old, we’ll go back to Armenia. The children must not break the ties with their native Country’.