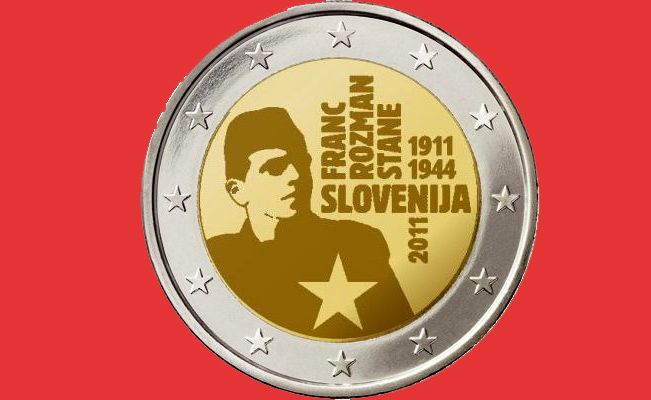 The five point star has returned to European coins over twenty years after the fall of the Berlin wall. Slovenia has just issued a million coins for two euro dedicated to a legendary partisan commander, Franc Rozman

Every year the countries of the euro zone can make a celebratory or commemorative coin. They decide the design and the Central European Benk decides the quantity. The first was coined by Greece in 2004 for the Olympic Games. Then others recognized the United Nations, the European Constitution, the European enlargement, universal suffrage, and other important events.

Born in a village near Lubljana, Rozman made resistance his life's work. Commander Stane tried, without success, back in 1935, to join the Ethiopians to oppose the Italian invasion; then with the International Brigade he took part in the war in Spain and, after the invasion of Yugoslavia he joined the Slovenian Liberation Front (OF). He soon became the commander of a partisan brigade and in July 1943 was appointed commander of the High Command of the Slovenian Resistance Army. He died in November 1944 when a mortar, just received by the partisans from the British, exploded.

There has been a lot of speculation about his death and even today some still believe in obscure plots. One accusation would lead to no less than Arso Jovanovic, the emissary Marshal Josip Broz – Tito sent, unsuccessfully, to Slovenia to discipline the too autonomous Slovenian comrades.

Rozman, in fact, would have been a proud supporter of the National Slovenian Army which he would have maintained even after the war was over. The amalgamation of the Slovenian Resistance with the rest of Tito's Army immediately after the war caused a real trauma for many Slovenian partisans. With him (Rozman) they say, things would not have gone the way they did and Lubljana would have kept its own military formations, and Slovenian would have continued to be spoken in the chain of command.

In Slovenia myriads of streets, schools and even one of the most important army barracks have been named after Rozman. In socialist Slovenia, as with many other “popular heroes”, he was elevated onto the altars of the homeland becoming, in the rhetoric of the regime, a sort of secular saint that even in our day evokes a certain mystical fascination among a considerable number of people. Today he is buried right in the centre of Lubljana, a short distance from the Parliament, in the tomb dedicated to the fathers of the Slovenian socialist homeland.

On the coin dedicated to him, apart from the effigy, name, dates of birth and death, there is also the star. “The symbol” explains the Bank of Slovenia, “of the movement Commander Stane belonged to.” This decision was taken by a special commission which had 31 proposals to choose from. Among these was one to dedicate the coin to the twentieth anniversary of the proclamation of independence from Yugoslavia, whereas to remember this occasion some collectors' coins will have to suffice. In effect almost the same consideration that the State coinage will give to the world rowing championship due to take place at Bled.

Choosing to represent a partisan and use a symbol of the communist regime has provoked quite a controversy both at home and abroad. Those rejoicing are above all the veterans who see their country once again celebrating the memory of the Second World War. On the other hand there are those who call it a scandal: the youth of New Slovenia, an extra-parliamentary, clerical, conservative group, disparagingly defined the partisan commander as nothing but a war criminal, while others called it a provocation precisely because it happened when Slovenia was preparing to celebrate its twenty years of independence.

So, for the umpteenth time, the country has returned to a climate of “cultural warfare”between “reds” and “whites”. In the Centre Left they like to underline that Slovenian independence has deep roots, originating with the resistance, and this is how they justify the decision to celebrate Commander Stane. In recent months, in fact, the Minister for Education decided to combine in the schools the remembrance of the seventieth anniversary of the constitution of the Liberation Front with the twentieth anniversary of independence. The occasion, called “Clench your fist” was announced with a realist-socialist style poster showing a red clenched fist.

The Centre Right, on the other hand, has not lost this opportunity to show the Communist period and the victory of Tito's troops as a great calamity. The country, they say, fell into the hands of Communists who committed fierce and bloody acts of revenge, filling Slovenia with communal graves. In other words, if the former consider Yugoslav communism, with all its mistakes, as having a “human face”, the latter are not prepared to let anyone off the hook and consider it was the same as in the whole of Eastern Europe.

Slovenian governments of different colours have also acted in this sense. The previous executive of the Centre Right took part enthusiastically in activities condemning communist crimes, while the present coalition of the Centre Left (or its men) have made a series of choices which seem to go in a very different direction: in Lubljana a street has been named after Josip Broz – Tito, a high honour was conferred the last Home Secretary of socialist Slovenia and now a coin with a fine five point star has been minted. This star, it must be said, was not even the symbol of the Slovenian Resistance which fought under the banners of the Popular Front.

Back in government after eighteen years, the Centre Left and heirs of the Communist Party are making the country rediscover the symbols of the regime. After all it is probably easier to launch into nostalgia than face up to the serious economic crisis Slovenia now finds itself in.