Wiki for Media Freedom: an interview with the Wikipedian in Residence 15/12/2015 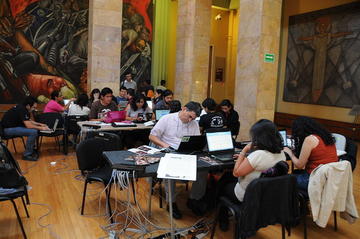 As part of its action within the European Centre for Press and Media Freedom , OBC Transeuropa is organising on 21st November in Belgrade a Wiki4MediaFreedom edit-a-thon in cooperation with Wikimedia Serbia and with the support of Wikimedia Italia.

A portmanteau word of “edit” and “marathon”, Edit-a-thon is an organised editing event featuring a bottom-up collaborative experience of knowledge production, where editors work together to improve specific contents on Wikipedia.

All the Wikipedia articles created in the frame of the Wiki4MediaFreedom initiative are available in the Resource Centre for Press and Media Freedom , a digital curation platform providing systematic access to curated contents related to media freedom and pluralism in Europe.

The Wiki4MediaFreedom event aims at fostering new alliances between media freedom activists, journalists and the Wikipedia and open knowledge communities to boost the availability of accurate knowledge on media freedom and pluralism-related issues in the largest open enciclopedia worldwide.

To this aim, the Belgrade edit-a-thon will gather media freedom activists, journalists, media experts and a group of experienced Wikipedia volunteers. For half-a-day they will work together editing articles related to some of the most concerning issues affecting the media systems in Europe today, namely: transparency of media ownership; media concentration; access to public information and self-censorship. Particular attention will be given to the media freedom situation in Serbia and in other South-East European countries.

The Wiki4MediaFreedom edit-a-thon will take place at the ImpactHub Belgrade (Makedonska 21) on Monday 21st November 2016, from 10am to 4pm. After a short introduction  and a tutorial on Wikipedia editing processes, 4-5 hours of collaborative editing will follow, with experienced Wikipedia editors working side by side with participants to edit entries, verify sources and references, and fill missing information.

The edit-a-thon is a follow up to a GLAM  project (“Galleries, Libraries, Archives and Museums”), a global Wikipedia initiative which helps cultural institutions to share their contents with Wikipedia and its many collaborative projects, implemented in 2015 by OBC Transeuropa in cooperation with Wikimedia Italia. Ultimately, it will contribute to the Wiki4MediaFreedom component of the Resource Centre on Media Freedom in Europe , adding to the work of the Resource Centre curators that regularly engage in Wikipedia to further disseminate its contents.