The return of non-aligned Serbia 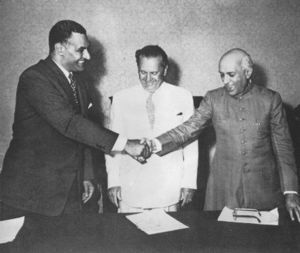 If Serbian diplomats get what they want, Belgrade will be the place where the Fiftieth Anniversary of the Non-Aligned Movement is celebrated in 2011. Yet, many commentators are now questioning the advantages of such a movement in a world which has changed so radically in the last half-century

Serbian diplomats are working as if they were "doping"; at least that was the assessment of the London weekly "Economist" of the Belgrade government's recent feverish activity in the international sphere. The diplomatic flurry of the past few weeks began with a visit by Serbian President Boris Tadic to Rome for a meeting with Berlusconi. Tadic then continued on to Berlin to meet with Chancellor Merkel. Then, there were the important visits from U.S. Vice President Joe Biden and Russian President Dmitry Medvedev, a trip to China, and meetings with the Swedish, Estonians, and Turks.

The Serbian president recently named the four fundamental targets of Serbian foreign policy: the United States, Russia, the European Union, and China. But the scope of Serbia's policy seems to be constantly expanding. On the one hand, Serbia has opened up towards its Balkan neighbors, but it has also turned to a political arena that has not been on Belgrade's agenda for a long time: the Non-Aligned Movement (NAM) Countries. The Non-Aligned Movement traces its roots to the era of Tito, one of the Movement's visionaries, when countries who did not consider themselves part of any major power bloc first came together under the shadow of the Cold War.

It seems as though Serbia would like to re-assume the status it had in international relations in the era of Tito's Yugoslavia. In those years, SFR-Yugoslavia was seen as a leader by many Third World countries and was the first Balkan country to gain international affirmation beyond the sphere of the region. In spite of the end of the bipolar confrontation of the Cold War, NAM still exists and has a total of 118 full-fledged members. Seventeen countries have the status of observers.

By re-launching a particularly dynamic foreign policy, Belgrade is presenting itself as a bridge between the East and the West, while at the same time reaching out to the other post-Yugoslav republics through the shared legacy of the Non-Aligned.
In July, the Non-Aligned gathered for their Fifteenth Conference in Sharm el-Sheikh, Egypt where President Tadic and Foreign Minister Vuc Jeremic held a busy series of bilateral meetings parallel to the conference. Above all, the summit was Serbia's chance to officially present its offer to hold the next conference, on the Fiftieth Anniversary of the Movement's birth, in Belgrade.

For Belgrade, the year 2011 could recall the year 1961 when NAM held its first conference in that city and Tito welcomed new post-colonial leaders such as Jawaharlal Nehru, Gamal Abdel Nasser, Sukarno, and Kwame Nkrumah. That 1961 convergence was a reaction to the system of "competitive coexistence" under which the great powers moved to expand their influence in the space that opened after the collapse of colonialism. According to a triangular scheme, instead of the bipolarity of the developed world, the Third World countries that met in Belgrade in 1961 opted for neutrality, aimed for peaceful coexistence, and above all stood for independence and non-interference. The Non-Aligned met again in Belgrade in 1989, a year in which the bipolar system had already started to collapse, eventually taking Tito's country down with it.

Holding the next summit in a Balkan country could offer an opportunity for collaboration between the former Yugoslav republics. At the end of the summer, Jeremic sent out a letter to the leaders of Serbia's neighboring countries inviting them to take part in the organization of the event. The letter underscored that "the meeting could mark an important part of our common history, which could serve the purpose of furthering our common well-being."

The first reactions to the proposal were positive and more in-depth discussions have started since September. Montenegro and Bosnia and Herzegovina expressed explicit interest, whereas Slovenian Foreign Minister Zbogar expressed appreciation for the idea although, as an EU member state, Slovenia would not be able to be directly involved as a co-organizer.

Croatia seems to be inclined to give a positive answer too, although in reality there has been a debate in the country for some time about the possibility of canceling its membership in the Movement, especially since Croatia's entry into NATO. Nevertheless, Croatian President Stjepan Mesic, who for several months in 1991 served as secretary general of the NAM, stated in Sharm el-Sheikh that being a NATO member "does not preclude a country from the possibility of taking part in the Non-Aligned Movement as an observer country." But the president's term ends in 2010, making it hard for him to make an official commitment at this time.


In Belgrade, the strengthening of Serbia's relationship with the Non-Aligned is seen primarily as a tool for defending the territorial integrity of the country. Two thirds of the member states of the United Nations take part in NAM; so NAM's policy obviously plays a large role in the lobby to limit the number of recognitions of Kosovo's independence. Only a few NAM members have recognized Pristina's declaration of independence, whereas many have supported Serbia's appeal before the International Court of Justice (ICJ).

According to Serbian politicians, the country's involvement in NAM does not interfere with the country's European steps. According to Jeremic, "Serbia plans to become a member of the European Union, but it continues to share the values which inspire the activity of the Non-Aligned." But one can't forget that other countries such as Cyprus and Malta quickly left the Movement as soon as they became members of the EU.

At present, it is countries not viewed in a positive light by the Euro-Atlantic block such as Iran and Cuba that hold prime positions in the Non-Aligned Movement. The Movement has often taken a stand against the United States and its monopoly in the big international organizations and is now lobbying for reform within the UN.

Beyond specific positions, it remains difficult to understand just how much political weight the organization can wield in a world system which is certainly multi-polar, but currently dominated by other actors.

Tensions that have hampered the Movement since its origin such as issues related to cohesion and identity linger even today. Despite the Movement's strong fundamental principles, in the '60s and '70s NAM began to struggle with how to define an ideology that could be relevant beyond its negatively-defined, counter-position to the global system. At its core, the Movement presents itself as a mosaic of bilateral relations, but its members have difficult finding an economic and political commonality shared by Arabs, Africans, Asians, and South Americans. Beginning as far back as the Cold War, contradictions and inertia pushed many of the "non-aligned" de facto closer to the superpowers.

There have been many comments that highlight the anachronism of Tadic's and Jeremic's initiative. "Tadic is Not Tito" read the front page of Belgrade's "Danas" after the president made his offer to host the Non-Aligned. Others have argued that the Serbia of today is not Yugoslavia and that the world is much different now compared to in the '60s and '70s. For that very reason, they argue, Serbia's ambition to position itself as a bridge between the East and the West is not based in reality.

Tadic's foreign policy certainly reaffirms Serbia's position internationally, but it risks staying fruitless exactly because of the lack of political clout it needs to take the lead in a game with so many angles. On the other hand, the strategy has certainly presented a basis for consensus and broad support from various segments of public opinion.

But there are doubts about the benefit a summit such as the one planned for 2011, costly in terms of labor and resources, could have. Beyond the issue of the recognition of Kosovo, it remains to be seen whether Serbia could gain something; for example with the opening of new markets for the Serbian economy. But Serbia's diplomatic effort in the post-Yugoslav space, a geopolitical area where relations are being gradually reconstructed and within which Belgrade could aspire to a leading role, seems more reasonable.

The Netherlands recently announced that it might drop its veto of the Stabilisation and Association Agreement, even without Mladic's arrest. This could lead to an important acceleration of Serbia's progress towards the European Union. In light of the recent developments regarding Serbia's prospects for EU integration, it will be interesting to see how Belgrade's current diplomacy evolves.