The Stanišić and Simatović case: the redemption of the ICTY? 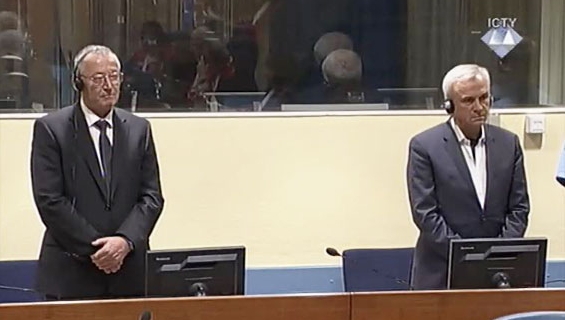 The Tribunal's Appeals Chamber orders that the two Serb officials be retried, in contrast with most of the controversial late ICTY jurisprudence

One of the cases that had sparked criticism of the ICTY’s work in 2013, the trial of the Serbian security officials Jovica Stanišić and Franko Simatović, took an unexpected turn on December 15, when the Tribunal’s Appeals Chamber issued a decision that not only overturns what had been established by the Trial Chamber back in 2013, but also orders that the two officials be retried.

The case and its wake

The two members of the Serbian State Security (Državna Bezbednost) had been acquitted in December 2013 of the accuses of murder, persecution, deportation and forcible transfer of population amounting to crimes against humanity, not so much because these crimes could not be proven - the Tribunal had established that they had indeed been committed with a clear discriminatory intent against the non-Serb populations in Croatia and Bosnia Herzegovina; but rather because they could not be attributed to Stanišić and Simatović, who had only contributed to form as well as financially and logistically support the special military units that eventually committed the crimes. Namely, despite the defendants’ continuous demonstrated ties with the special units guilty of the crimes, including trainings and meetings where they publicly praised the units’ military achievements, the tribunal did not hold that Stanišić and Simatović had aided and abetted the crimes, because they had not actually ordered their commission.

This was the third of a series of cases, together with the Gotovina & Markač and the Perišić one, where the tribunal rejected allegations of serious crimes on the basis of quite narrow interpretations of the law, which, according to some experts, departed from its earlier jurisprudence on the same matters (however, others have argued that such interpretations can be traced all the way back to the Tadić case).

Back in 2013 these decisions had sparked a heated debate, with some experts and activists for the first time openly criticizing the ICTY and even doubting its fairness, and others stepping in to defend the Tribunal’s right to judicial discretion.

The whole affair had taken on a conspiracy tone when one of the judges of the ICTY, Frederik Harhoff, had accused in an open letter the then president of the ICTY, Theodor Meron, of having put pressure on the judges so that they would decide for an acquittal in all three of the mentioned cases.

For those who believed in Harhoff, the rationale behind this pressure would be that, had these officials been convicted, the responsibility of foreign officials for crimes committed in another country would be stated, creating a dangerous precedent potentially applicable to powerful western states intervening militarily in other countries.

These speculations had prompted a group of activists and intellectuals from all over the region of the former Yugoslavia and beyond, including established NGOs like the Humanitarian Law Center and the Youth Initiative for Human Rights, to draft a petition asking Secretary General Ban Ki Moon to open an investigation on Meron’s role in the affair. Not only their request was not heeded, but Meron was even re-confirmed as the ICTY’s President in October 2013.

Conspiracy theories aside, the legal experts’ reservations on these three ICTY judgments were fully justified. In particular, the interpretation of aiding and abetting proposed by the Appeals Chamber in the Perišić case and then upheld by the Trials Chamber in the Stanišić and Simatović case was so strict that it would require that in every case where an accused had helped the commission of a crime but was not present on the scene, the presence of clear instructions to commit the crimes be demonstrated. Of course, this proves particularly difficult in contexts where there are unclear command hierarchies and not so official armed groups involved.

The jurisprudence of the ICTY had been considerably progressive in this sense, resorting to doctrines such as the Joint Criminal Enterprise that were thought precisely to facilitate the attribution of responsibility in the so-called new wars, where the presence of paramilitary groups and other non-state actors besides regular armies diffuses responsibility and considerably complicates tracing the chain of command.

Along this line, the earlier ICTY jurisprudence had adopted an interpretation of aiding and abetting whereby the accused was to be considered responsible for a crime if the assistance he/she provided had substantially contributed to the commission of the crime (actus reus), and the accused was aware of the risk that the crime could be thereby committed (mens rea). The provided help, e.g. financial and logistic support, would be considered substantial if, without it, the crimes could have not been perpetrated in the same way.

But with the Perišić and Stanišić & Simatović cases, an additional criterion was added to the picture, i.e. that the assistance provided be specifically directed to the commission of the crime. Specific direction which, as already shown above, would materialize only if specific instructions had been issued by the accused that the crimes be committed.

But this conservative turn of the ICTY did not last long, also due to the volatile nature of international law, where past decisions do not form binding precedents for later judgments.

In fact, already in the fall of 2013, another international Tribunal, the Special Court of Sierra Leone (SCSL), explicitly rejected the specific direction criterion established by the ICTY in evaluating the responsibility of former Liberian president Charles Taylor for aiding and abetting war crimes committed in the Sierra Leone internecine war.

The defense of the Liberian president had in fact used the ICTY-coined specific direction criterion to argue that Taylor’s support of murderous rebels in Sierra Leone, sadly known for the practices of recruiting child soldiers and of cutting the limbs of “political opponents”, was not directed at the commission of those terrible crimes.

But in September 2013, the appeals chamber of the SCSL had confirmed Taylor’s responsibility, rejecting the ICTY’s interpretation of aiding and abetting, and making Charles Taylor the first former head of state convicted by an international tribunal since the Nuremberg trials— and, what is also notable, for crimes committed in another country.

In another U-turn, perhaps prompted by this episode, or more likely because the Tribunal was now composed in part by new judges, even the ICTY recanted its earlier position on specific direction in two later cases, those of Sainović and Popović.

The 15 December decision on the Stanišić and Simatović case is therefore the third of the ICTY to confirm this rejection.

The significance of the Stanišić and Simatović appeals judgment

So why is this December’s decision on the Stanišić and Simatović case so relevant after all?

First, it seems to definitely mark the death of a dangerous precedent, that of a rather limiting interpretation of aiding and abetting in international law. Though it could still be retrieved by some other international Courts, there is now a considerable amount of precedents directing international Courts toward a broader interpretation of aiding and abetting and easing the way for more prompt attributions of responsibility, even in the legally ambiguous contexts typical for contemporary conflicts.

Second, the case had taken on a symbolic value together with the Gotovina and Perišić ones. In the latter two, the officials on trial (respectively, a famous Croatian general allegedly implicated in the ethnic cleansing perpetrated during operation Storm, and a Serbian JNA officer allegedly involved in the crimes committed by the Bosnian Serb Army), had eschewed long prison sentences meted out to them by the ICTY thanks to appeals decisions that, via a different interpretation of the law, had freed them of all charges to everyone’s surprise. Many are now commenting that Stanišić and Simatović were not so lucky, as they could be convicted as a result of the retrial.

This wavering of the ICTY between utterly different judicial solutions bears witness to an ever-present element of arbitrariness in Courts’ decisions and to their not being immune to political motives, as legalist enthusiasts generally claim.

But perhaps most importantly, as pointed out by ICTY expert Marko Milanović, this is the last case before the ICTY where the responsibility of Serbian officials for crimes committed by Bosnian and Croatian Serbs could be established, in the Tribunal’s failure to convict other Serbian officials like Milosevic and the above mentioned Perišić.

Should Stanisic and Simatović be found guilty in the retrial, a connection between the Serbian political cadres and the crimes committed in Croatia and Bosnia Herzegovina would be established, legally sanctioning the direct involvement of the Serbian state in the Bosnian and Croatian conflicts of the 1990s.