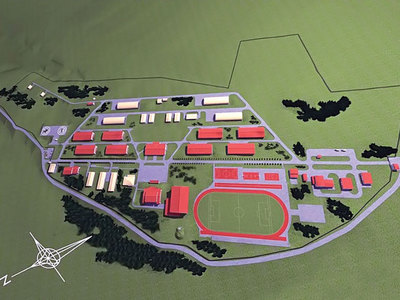 ''Yug'', the biggest military base in Serbia, was officially inaugurated in the Municipality of Bujanovac last November. The huge, well-equipped base was built to facilitate the training of Serbian army units, even though the local Albanian community fiercely criticized its construction

The biggest military base in the Balkan region was officially inaugurated last year, at the end of November, in the Municipality of Bujanovac, Southern Serbia. The minister of defence Dragan Šutanovac, the highest-ranking military officials in the Serbian army, President Boris Tadić, and Prime Minister Mirko Cvetković all took part in the official ceremony.

Located in Bujanovac, a town in the southern region of Serbia where most inhabitants are ethnically Albanian, the opening of the “Serbian Bondsteel” [so nicknamed after Camp Bondsteel, a huge US military base in Kosovo] provoked a heated debate between supporters and opponents of the military base. Authorities in Belgrade and local Serbians maintain that the “Yug Military Base” ensures stability and peace, while members of the Albanian community view it as a threat and a clear sign of increasing militarization in the region.

Although it was only recently inaugurated, the “Yug Military Base” has been one of the most talked-about issues in Serbia for quite some time. Construction of the base was mentioned for the first time after the “low-intensity conflict” between Serbians and Albanians in Southern Serbia in 2001. Construction work started in 2003, but moved very slowly due to political circumstances and lack of financing. The construction of the military base sped up only when Dragan Šutanovac, a member of the Democratic Party (the main political party in Serbia), was elected Minister of Defence. The construction of “Yug” further accelerated when the police gave up on building a base in the Cepotina area.

The Minister of Defence has prioritized the construction of the military base in Bujanovac. He has maintained that the military base will increase security for all citizens living in Southern Serbia. The “Yug” base will also be used for organizing peace-keeping operations and will include barracks for the new professional army.

It goes without saying that the military units on long-term deployment in Southern Serbia will be housed at the new military base (until completion of the “Yug Military Base”, they were housed in scattered, abandoned schools and plants), although this fact was never mentioned explicitly.

No one but local Albanian political parties seems to be interested in the de-militarization of Southern Serbia, that is, complete withdrawal of military forces from the region. The “Yug” military base gained the status of the “most advanced” military base in Southern Serbia thanks to its “strategic” location, as the military says, making it the best point for observation of Kosovo and Macedonia.

The “Serbian Bondsteel” has cost 18 million euros and so far, only two out of three construction stages have been completed. The military base occupies 35 hectares, 66 buildings, and accommodation facilities for approximately 1,000 soldiers. It is the Serbian army’s most technologically advanced facility, designed for the training of professional military units, in particular those that will later be working in peace-keeping missions. The base also has sports venues, canteens, healthcare facilities, a fueling station, and repair workshops. It is surrounded by a three-meter fenced wall and protected by the most state-of-the-art security systems.

On inauguration day, the sun was shining just like during an Indian summer. Kosovo and Macedonia were visible from the hills. Soldiers with tanned faces marched in their brand new uniforms and everything was ready for the inauguration ceremony.

After the singing of the national anthem and the flag-raising ceremony, Serbian President Boris Tadić addressed the audience with the following words: “All citizens of Serbia wishing their country peace and stability, all Serbians wishing to improve cross-ethnic relations, should be happy that the Yug Military Base has finally been finished. Those who do not want to live in a peaceful Serbia and supporters of organized crime are certainly not going to be happy about it.”

It is difficult not to interpret these words as a response to the complaints of local Albanian leaders who believe that the presence of the military base is a provocation of the local Albanian community.

“The military base must be a standard for all other army facilities in Serbia because it offers an opportunity for development of the region; it will also be used as a peace-keeping training facility for other armies. Military healthcare facilities are open for civilians too, and the military are ready to cooperate with the local population at any time”, Tadić added.

Minister Šutanovac declared that the Yug Military Base is a great opportunity for development of Southern Serbia, adding that approximately 1,000 people will be employed at the base in the next few years. Moreover, local civilians will be able to get free, quality medical care at the base without having to go to Vranje.

However, the members of the local Albanian community do not seem to see the situation in the same idyllic way. Riza Halimi, the Secretary of the Party for Democratic Action and MP, stated that the opening of the base is a clear sign of increasing militarization of the region.

“Of course, it is the State’s right to choose the best location for a military base; however, our party has always firmly opposed the construction of a military base in the Bujanovac municipality”, Halimi said.

According to Halimi, the hardest thing to accept is the fact that the military base will be built mostly for anti-terrorism units.

“Many different ethnic groups live in this area. People have not completely gotten over the 2001 conflict, so I am not sure that Bujanovic is the right place for a military base of this kind.”

Halimi also added, “We would be more than happy if State institutions were more present in Southern Serbia, but rather than building huge military bases, they should think about supporting the economy”. The mayors of the municipalities of Bujanovac and Preševo, Shaip Kamberi and Ragmi Mustafa, not only refused to take part in the inauguration ceremony, but also publicly stated that the Yug Military Base will certainly not contribute to increased stability in the area.

But military experts maintain that the Serbian government did the right thing when it opened the base. Security expert Zoran Dragišić (Institute of Defence) thinks this is a crucial step for the reform of the defence system. Ninoslav Krstić, another security expert and a former official, maintains that the military base is vital for the security of Corridor Number 10, at the crossroads of organized crime networks. A third security expert, Aleksandar Radić, maintains that Serbia actually needs a base like “Yug”.

“If we must be neutral, from the military point of view, we must also have strong defence potential. While NATO member states can rely on military help from other member states for defence, a neutral country can only count on its internal forces,” Radić wrote in a column published in the daily newspaper “Politika”.

The actual role played by the Yug Military Base will be clearer in the next few years. In particular, it still remains to be seen whether Serbia will actually put into practice the much talked-about reform of the military system and create the long-promised Serbian professional army.