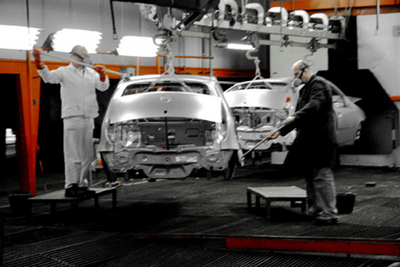 A journey to Kragujevac, the home town of Zastava - the “Made in Yugoslavia” car. The expectations of citizens and workers in the “Yugoslav Turin” in the wake of the recent agreement between Belgrade and the Fiat Group to establish the new Fiat Automobili Serbia in that city

On 23 December, Fiat’s number two, Alfredo Altavilla, and the Serbian Minister of Economy, Mladjan Dinkic, signed a joint agreement on the creation of Fiat Automobili Serbia (FAS), with 67 percent of the ownership controlled by Fiat and 33 percent by the Serbian government. Zastava, the pride and joy of ex-Yugoslavian industry, no longer exists. It is succeeded by FAS (Fiat Automobili Serbia), set to operate in the old factory plants of Zastava in Kragujevac. The “Yugoslav Turin” had, until now, still been producing the old Florida, Yugo, and Koral, as well as the more modern Zastava 10. Acquisition of the production of the Zastava 10, identical to the Punto Classic, is the reason Zastava bought the franchise and the production line (for 14.5 million Euros) in 2005.


The agreement establishes funding of 100 million Euros by 29 December, 2009 - the founding capital of Fiat Serbia. This funding will also go towards updating the technology that was, until now, used in Kragujevac. “The Fiat Group works all over the world with specific standards that will also have to be implemented in the plants in Serbia”, explains Richard Gadaselli, communications manager, speaking with Osservatorio Balcani e Caucaso.

According to the agreement, another 100 million Euros is slated to arrive in 2010 as part of the second installment in a total investment of 700 million Euros: Serbia's largest foreign investment. The old Zastava plant should eventually reach production of 200,000 units per year and produce two new models, one B-class (a city car) and one C-class (a family utility car).

“The Fiat investment symbolizes the end of the crisis in Serbia”, said the Minister of Economy, Madjan Dinkic.

It was April, 2008 when, quite suddenly, Sergio Marchionne and the Serbian government signed a memorandum of understanding concerning the selling of Zastava to Fiat. According to many analysts, this was a decisive factor in the election victory of Boris Tadic, signatory to the memo, in the presidential elections 10 days later. But a year and a half later, not a single Euro has arrived in Kragujevac. It is because of this that today, even if the media report satisfaction with the government, there is a sense of mistrust among Serbian citizens.

Kragujevac expected the arrival of the investment after the first contract was signed on 29 September, 2008. Among other things, the agreement specified Fiat's rehiring of Zastava workers (1,000 immediately, reaching a total of 2,433 in 2012). “For the time being, it just looks like a signature on a new agreement”, says Rajka Veljovic, representative of all Zastava workers. “We do not yet know what will happen with the investment and the workers. There are 2,800 workers in Zastava; 800 work assembling the new Punto Classic, whereas the destiny of the other 2,000 is not known”.

In March, 2009, Zastava stopped production of the old models, maintaining only the assembly line for the Punto Classic (initially only gas-fueled, since July also diesel-fueled, and since November, gpl) with parts produced in Italy.

In 2009, in order to stimulate the market, the government offered subsidies of 1,000 Euros per car for the replacement of the old Zastava vehicles with new Puntos. The operation, called “Staro za Novo” [old for new], went very well and an extension of the subsidy program is expected. The Fiat Punto actually represented a 54 percent share of its market segment in Serbia in 2009.

“The government has been paying the subsidies, the workers, and for the new infrastructure”, says Zoran Mihajlovic of the Samostalni Sindikat (Independent Union), “it has been paying unemployment benefits of the workers who were laid off. It is obvious that, in this way, Zastava works a lot better”, says the unionist, turning the knife in the wound. The government and the municipality have offered the Turin company many incentives in order to bring it to Serbia: the plants were given to Fiat for free, a “free zone” was created to allow for the duty-free import of products from Italy, and FAS has been exempted from communal taxes for a period of 10 years. The agreement foresees the giving of another large tract of industrial land to Fiat for 14 of its connected companies, and a junction to Motorway E75 is being built.

“We know that Zastava had no future”, Mihajlovic admits, “we could have only continued for another couple of years without real investment. From this point of view, Fiat’s arrival is good news for the city, as well as for Serbia overall”.

The economy of the city will certainly benefit. The production plant itself, together with related companies, could bring the city several thousand jobs. The revival could produce an interesting virtuous cycle, as Kragujevac today is not dependent only on the car factory like it was in the past. As much as Zastava remains undoubtedly important, many other activities have developed at the levels of small, medium-sized, and large enterprise. Interesting initiatives have even been promoted in agriculture where small farmers have been given subsidized loans for the procurement of machines, offering those who do not want to leave the countryside additional opportunities.

Deputy mayor Nabojsa Zdravkovic told us about these initiatives, as well as about the important infrastructure work which proceeds as planned. “We have given away the land in the industrial zones tax-free”, says the deputy mayor, “but the land used for economic purposes is taxed.”
The city has obtained certification by NALED (National Alliance for Local Economic Development), demonstrating the high standards it has achieved with respect to administrative efficiency, transparency, efficacy of administrative procedures, and the use of new technologies.

“This region was called ‘the valley of the starved’”, Dragan, a worker in a youth center financed by the Municipality of Turin, tells us.


That is a good picture of Kragujevac in the years of crisis in Serbia and Zastava. Today, the city is visibly more lively and dynamic. It is perceived as a place with an improved economic situation that is not solely dependent on Zastava. The city is ready for the Fiat investment, even if this means giving up the Zastava brand. “Until recently, everything was Zastava; every company that emerged around us was connected to the car factory; the other day in a bar I found plastic “Zastava” spoons,” says Dragan. The Zavodi Crvena Zastava (Red Flag Departments, which is the factory's original name) started car production in 1953 in Kragujevac, a city 180 kilometers south of Belgrade and the fourth largest city in Serbia. After that, the city developed thanks to the factory, which in its golden years until the end of the ‘80s employed over 35,000 people, including indirect employment in related companies. The factory's relationship with Fiat began in the ‘50s. The Turin group sold franchises (for example the Fiat 600, the Florida) and technology to Kragujevac. “It was always full of Italians”, says the concierge of the central Hotel Kragujevac, “at least 60, 70 people from Fiat lived here. Then they would marry a local girl and return to Italy”. Zastava followed Tito’s model of production in which every republic of the federation had to contribute to the effort. Batteries were produced in Kosovo, the electronics in Slovenia, and the gear-stick in Croatia. This made operation impossible during the Yugoslav wars in the '90s. Some of the production lines were destroyed in NATO’s bombing in 1999, and the dissolution of the Zastava Group (which comprised everything from client services to production of light weapons) began in 2001 in order to be privatized. The car production department was the largest one, with 13,500 workers who were gradually being laid off. B., a former worker who preferred to stay anonymous, tells us that when they heard for the first time about the deal with Fiat, workers were confused and scared. “We didn’t know what would happen to us; we had news only from the media.” After this, the government created a “social program” to lay off 1,700 out of what at the time were 3,300 Zastava workers. There were different options: one could take 300 Euros for each year of work, paid all at once, or, for those closer to retirement, 260 Euros per month until retirement, to be used to pay also the last years of benefits. B. chose the second option. Even though he had worked in the factory for 37 years and was only two years from retirement, he lived in insecurity for months. Perhaps the city could also benefit from a generational change. There is the sensation among the youth that such change is necessary, even if it is painful. “Unfortunately, Zastava could not go on like this, as a factory without profit, relying on government subsidies”, two young people from Kragujevac tell us. The older ones recall past greatness, when working for Zastava was a reason for pride and the company was considered the success of Yugoslav communism. They wish things were like before, even though they have no illusions. They know that something had to change. And now it will.