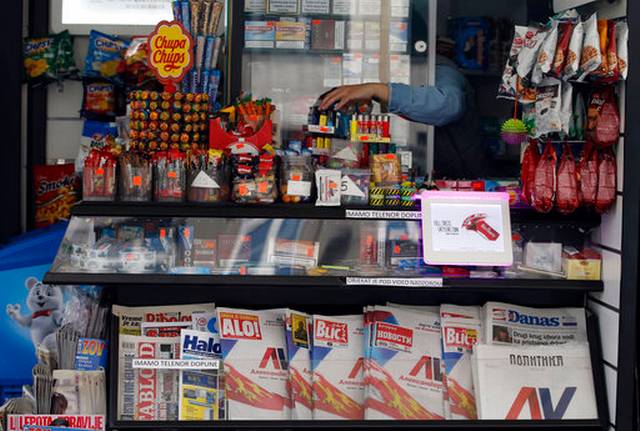 Methods for pressuring and controlling the media in Serbia have become more sophisticated than in the past, but they are no less harmful to freedom of expression

Who owns the media in Serbia? In a report on "ownership and control of the media in Serbia", published in February 2015, the Council for the fight against corruption revealed that 27 out of the 50 most important media in the country were far from transparent in terms of disclosing their ownership.

The Council concluded its report by insisting that "much of the media content is not the result of free, objective investigation" and that "most media outlets are not transparent about their financial revenues and their connections with the political and economic elite".

On the issue of transparency of media ownership we created a series of entries on Wikipedia, as part of Wiki4Mediafreedom . The entry on Serbia is also available in the Resource Centre for Freedom of the Press.

Last year, Serbia approved a series of measures, grouped in the "Law on Public Information and the Media", designed to address the problem. Yet, as often happens in the country, "the problem does not lie in the legislation, but in the fact that it is not respected", denounces Milan Dinić, journalist and media expert. In his view, the issue is crucial for establishing true democracy in Serbia. "The country is still in transition and politics and the media are too interconnected", he says.

Among the most egregious cases is that of the Politika newspaper, founded in 1904, a reference point in the Serbian press. In 2014 its 50%, previously owned by the German WAZ media group, was bought for 4.7 million Euros by the East Media Group – a company based in Moscow, owned by businessman Miroslav Bogićević, close to the Democratic Party (DS). The rest of the shares are controlled by the company Politika AD, which is controlled by the state.

Another often-cited example is that of N1 chain, a local declination of the American CNN, owned by telecommunications company Serbia Broadband (SBB), in turn owned by the US investment fund KKR Global Institute, chaired by American retired general and former CIA director David Petreus.

"Many media outlets in Serbia are presented as independent but, in most cases, they are only independent from the public and are, in fact, largely supported by foreign investments", explains the researcher. Another controversial case involved B92 and Prva Srpska Televizija, purchased by the Greek Antenna Group through a complex scheme including offshore companies. Nevertheless, the buyer was identified as shipowner Minos Kyriakou.

This is one of the reasons why Stevan Dojčinović, editor of the independent investigative journalism website Krik , specialising in uncovering corruption cases, believes that transparency is not as major an issue as in the past. "You know who is behind Informer, you know who runs TV Pink...the ownership of these media outlets, which are the most problematic and close to current power, is well-known", he stresses.

According to the journalist, media control by the power in Serbia has evolved, taking more sophisticated forms. It rests on the fact that Informer is the only pro-government outlet created since the arrival of Aleksandar Vučić in 2012. Its owner, Dragan Vučićević, is known to all, as it is known that TV Pink is owned by Željko Mitrović, often criticised for his fervent support for Vučić. "The other media were close to the previous government, so the current majority has adopted a more intelligent and effective approach to control them", comments the journalist. The strategy is that of "case by case".

The main lever of influence lies in the advertising resources provided by ministries and public companies. In its 2015 report, the Anti-Corruption Council highlighted some drastic changes in Serbia's advertising market after the elections of 2012. Another tool used by the state is debt. TV Pink owes the state millions of Euros in taxes and was, at the time of the study, the media outlet in the country most indebted to the Serbian Revenue Agency. "If the state claimed its money back, TV Pink would go bankrupt. If you want to make money in the media sector in Serbia you need to be friends with the government", sums up Stevan Dojčinović. An opinion shared by researcher Milan Dinić: "In the nineties they would send a gang of thugs to the newsroom, they would point a gun to your head and say, 'you do not talk like that'. Today, it's still criminals in the newsroom, but they wear suits and talk about revenues you might lose..."